Armed citizenry and the insurrectionist view of America 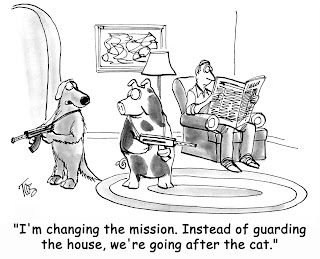 How did we get from owning guns for self protection and hunting to carrying loaded guns around in public as a display of "freedom" and "second amendment rights"? How did the second amendment become, to some in the gun rights movement, an excuse to arm themselves against their own government in open displays of insurrection? How did some extremists become wannabe militia members, cops, or actual militia members? How does the corporate gun lobby get away with instilling such fear and paranoia that these folks get their "undies all in a bundle" over misperceived slights against their perceived gun rights? But this is the American gun culture on full display for all to see. It is a minority of crazed gun owners but their antics are going to hurt those reasonable gun owning folks who actually agree with common sense gun laws and responsibilities that come with their rights. So let's take a look at what's going on in the arena of gun rights extremists.

Armed insurrectionists have tried to take over public places with their guns:

Armed demonstrators gathered outside the Texas capitol building in Austin on Wednesday, seeking to highlight the state's right to openly carry rifles. While some were unsettled by the display, the protesters said the event was designed to get people accustomed to the weapons and show that those carrying them were normal citizens.
"That's why we're here. Trying to make people feel more at ease, so they don't feel that way," said Scott Smith, a member of the group Open Carry Texas, which organized the event.
Spectators weren't the only ones made uneasy by the firearms. Members of the group came with their guns loaded, according to KEYE-TV, which at one point prompted troopers stationed at the capitol to ask the protesters to consider removing the magazines from their rifles. They declined, noting that they were within their rights to have live rounds in their weapons.
Later in the day, demonstrators attempted to enter the state capitol building with their guns out. They were turned away by a trooper, who told them that whileconcealed handguns were permitted inside, their semi-automatic assault rifles weren't.
In Colorado, other gun rights activists used Independence Day to rally for their cause. Members of a local tea party group brought their weapons to a parade in Custer County, Colo. on Thursday, though theirs were reportedly not loaded.

At every one of these supposed rallies for freedom and second amendment rights, these armed citizens proclaim that they are normal people who just want everyone to know that guns are not a problem when carried by themselves. The problem with that specious rationale, if you can call it that, is that armed citizens are shooting people every day in public places- for real. So pardon the rest of us if we don't think it's safe for a bunch of second amendment absolutists to be toting their guns around in the public square. In what other country not at war do we see armed citizens at parades, movie theaters, coffee shops, bars, grocery stores, Malls, Walmart stores and other places where people gather? And I can find examples of shootings at all of these places, and have in many of my posts now for years. Most of them are shootings committed by "law abiding" citizens with guns- some intentional, some accidental. Some are "law abiding" because they were able to get guns and ammunition even though they are prohibited purchasers through a federally licensed dealer sale. Don't believe me? Let's look:

You get the idea. This is why the public understands very well that armed citizens in public places are not safe and should leave their guns at home. Then, of course, there are all of those domestic shootings, stray bullets in neighborhoods, accidental discharges, shootings of "intruders" who turn out to be a granddaughter, shooting by kids who find loaded guns around, etc. There are too many to write about here. Oh yes, I did forget about shootings at gun ranges ( and here) , where, of course, one would think gun owners would be particularly safe from shootings. One would be wrong.

I found this video interview with some folks who actually showed up for the failed "armed" rally promoted by far right crazy Adam Kokesh in the nation's capitol on July 4th. Listen as they say, when asked, that they actually support some reasonable measures to keep guns from getting into the hands of those who shouldn't have them. Just keep the heck away from their guns. None of the proposed legislation would take away their guns, but that doesn't seem to compute for these folks. The video is below:

So pardon me for being cynical. Contradictions, confusion and bloviation abound. Much of what they are saying doesn't even make sense. One man is a pacifist ( not a gun owner) but mostly concerned about individual sovereignty. Another thinks that though people should be allowed to carry guns in schools, gun owners should be responsible for themselves while carrying and that guns should be registered. One man refers to "inaledable" rights? I tried spelling this several ways and couldn't find the word, but was referred to a definition of inalienable or natural rights. But this guy carried on as if he knew what he was talking about. Does he or is he just spouting off and pretending he knows what he's talking about? And then this: "This is the government our founders warned us about." What the heck does he mean? He's a pacifist talking about armed resistance against a government run amok. Seriously. Now I don't know about you, but I don't believe we have a "police state" as the man in the video proclaims. And finally, one man says he is not a gun owner and doesn't trust himself with a gun but he's there anyway to support the second amendment. What? These folks are actually anti-government libertarians. Who cares about guns? 5 people showed up at the non-rally.

Anyway, people with common sense don't want armed people in public. These are clowns who think they need a show of their guns ( and/or their extremist beliefs) to proclaim adherance to their second amendment rights and to their version of the Constitution. Never mind that the Supreme Court has given them what they wanted- the right to own and have a gun in the home for self defense and hunting. Justice Scalia, of course, understood that that right comes with some responsibilities and limitations. This wasn't enough for some folks, though, whose real purpose seems to be to arm themselves against their own government and run around like lunatics making stupid and dangerous remarks about President Obama and the government. The American public is not on board with this view of America. These are a minority of gun rights extremists, fueled by the corporate gun lobby and talk about "the guys with the guns make the rules." Wayne LaPierre, of the NRA, said it:

Don't believe him. The "guys with the guns" are not going to make the rules in America about public safety. They have done enough damage thus far by stopping all reasonable legislation to make our communities safer from the devastation due to gun violence. In America, we have a peaceful transition of government in democratic elections- not an armed revolution, as the folks above are talking about. In addition, these same folks have duped state legislators into passing looser gun laws instead of stronger gun laws. That is beginning to change after 12/14 when 20 first graders were massacred in their school rooms. It's time for them to stop their false assignations, paranoid rants and general nonsense. It's time for a change to our nation's gun laws and our nation's gun culture. Enough is enough. We have enough evidence that our country is not safer with more guns carried by more people into more places. Even guns at home for self protection have been turned into weapons of death when accidentally or intentionally shot off as happens far too often. See Ohh Shoot and Kid Shootings blogs if you don't believe me. Let's get to work and take measures to keep us all safe from gun violence in our homes and public spaces.
Posted by japete at 1:09 PM