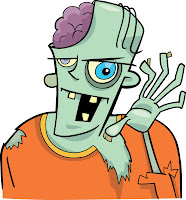 You can't make this creepy stuff up. I wrote a recent post about the gun bullies managing to shut down articles on Ms. Magazine because of their vicious and demeaning comments on an article by my friend Heidi Yewman. Now these guys think it's amusing to produce a "zombie" that they call a "Bleeding Gun-Control Lobbyist" for target practice. From the article:

"A controversial California company that sells mannequin shooting targets has come out with two new products: a "Bleeding Gun-Control Lobbyist" and another that looks like it's based on MSNBC host Rev. Al Sharpton.

Zombie Industries produces "life-sized tactical mannequin" targets painted to look like zombies that "bleed" and become mutilated after being shot.

The company wrote up a story about how the gun-control lobbyist became a zombie.

"One night while headed home, our friend found himself face to face with a viscous Zombie," the company web site says. "Being that he believed firearms served no purpose in self-defense, he was unarmed and knew he set himself up for something worse than becoming a victim... he was about to become easy Zombie pray! The result was an Undead Gun Control Lobbyist Zombie that is just begging to be put down."

The company has a disclaimer saying all its products are works of fiction.

"Names, characters, stories, places and incidents are products of the author's imagination and are used fictitiously," the company web site says. "Any resemblance to actual persons (living or dead), events or locales is entirely coincidental.""


Right. And if you believe that I have a bridge to sell you. Here is the photo of the zombie from the the website of politix-topix.com: 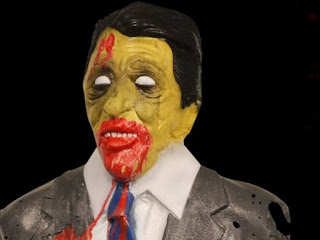 I'm speechless except to say, where is common sense?
Posted by japete at 3:39 PM