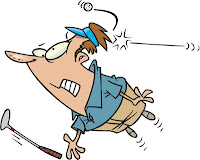 It's the golf season in my neck of the woods. Most of the long winter months, golfers in the Duluth area dream of warm weather and golfing again. Many go south for weeks or months or for a trip or two to keep up the golfing and enjoy the warm weather. On one such trip a few years ago, my husband and I joined friends for a golf trip to Hilton Head, South Carolina. It was a great trip with not only golfing, but spending good times with friends in a large rental home, walks on the walking paths and the beach, dinners out, taking turns making dinners for the group, playing games at night and overall having a good time. On one of the days we golfed, there had been an incident before we got there of someone shooting off a gun near the perimeter of the golf course. The person was warned off and apparently law enforcement and the club officials took care of the situation. It was a bit concerning but golfers were told it was all taken care of.

There are certainly hazards on golf courses but they are usually designed purposely to challenge golfers. A new hazard has emerged for golfers in the form of bullets and guns lending new meaning to the word "fore" on local golf courses. Golf courses are often surrounded by woods and sometimes near sparsely populated areas. You never know what might be lurking in those woods. Where I golf, there are deer, fox and the occasional coyote. The geese are also hanging around the water hazards. In South Carolina, we encountered some alligators on the course. But this recent incident should be enough to alarm golfers all over the country. A woman golfing on a Georgia golf course was shot in the abdomen by a man shooting at squirrels near by:

A man shooting squirrels at exclusive Ocean Forest on Sea Island with a .22-caliber rifle shot a woman on a golf course Sunday morning.

The victim was in stable condition Monday in intensive care after surgery, authorities said.

Glynn County police said Edward George Johnson of Forest Road called them at 11 a.m. to say he had accidentally shot someone on the Ocean Forest golf course.

A .22-caliber round had struck Jane Pendergast, 70, also of Sea Island, in the stomach at hole 5 on the course, police said.

Johnson, 65, was charged with one count of reckless conduct, a misdemeanor, police said. He was booked into the county jail and released on $911 cash bail.

In what kind of country do we live? This is nuts and it's all part of a gun culture gone wrong. When we are encouraging more guns for more people in more places, these are the consequences. When we idolize guns and believe that the guns and their owners can do nothing wrong and should be left with few regulations, this is a consequence. There are way too many accidental shootings like this. Or are they accidental? One could say they are actually intentional because when people put others at risk with their reckless behavior, that is not accidental. When it involves deadly weapons like guns, many things can go wrong and many things do go wrong. We need to pay much more attention to what years and years of failing to pass laws and do proper research on the affects of gun ownership and gun regulations has done to public health and safety. There are blogs that are keeping track of this stuff just in case you think we are making it up. Of course, there is Ohh Shoot. Then there's Accidental Shootings. Also the Gun Report by Joe Nocera and Kid Shootings, to which I contribute. All are documenting stupid and dangerous gun incidents and actual senseless shootings. The latest entry at the Ohh Shoot blog, linked above, goes like this:

42-year-old Michele Wanko, of Parkside, Pennsylvania, and her husband, 43-year-old William, were at home "casually drinking" vodka and lemonade when they decided to go into the basement. William wanted to show his wife how to use a semiautomatic handgun. Michele wanted to be prepared in case someone tried to break in to their home.

According to police, William took several guns out of a gun safe and was demonstrating to his wife "how the weapon worked as far as taking the magazine out, making sure it was safe, and how to pull the slide back."

As William was reaching in the safe, Michele picked up another gun and pulled the slide back. "When she let go to the slide, the weapon went off," said the local police chief.

William was struck in the upper chest, just below the Adam's apple.

According to reports, he said "I can't believe you shot me", tried to go up the basement stairs but fell back down.

Police and emergency were called to the home shortly before 4 a.m. William was taken to the hospital where we was pronounced dead.

"Why, after six-and-a-half hours of drinking, would you go down and handle a gun, especially with someone who never shot a weapon before?" said the local police chief.

The couple have two small children, ages 5 and 2, who were asleep upstairs when the shooting occurred.

Michele was arrested and charged with involuntary manslaughter, aggravated assault and possessing an instrument of crime. She is currently out on bail.

You just can't make this stuff up.

So just out of curiosity I thought I'd do a search of shootings and shooting incidents at and near golf courses. Here is what I found:

I'm assuming that my readers would notice that half of the incidents about which I wrote occurred in Florida. Is there a coincidence? I'm just saying. Florida gun laws are among the loosest in the country. When golfers need to be concerned about being hit with bullets rather than golf balls, we have a problem and we will need some common sense to figure out how we can make our communities and public places safer from gun violence.
Posted by japete at 7:08 AM