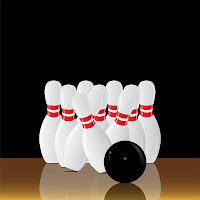 We have to talk. Would you expect that there would be people at the local bowling alley carrying guns for self protection? I mean, what could possibly go wrong? There's a lot of moving around when you bowl and a lot of families with kids at a bowling alley, depending on the time of day. Also, most often, beer and other alcohol is served at most bowling alleys. So I just don't get what's so scary about going bowling? But this Florida man must have been fearful that someone was going to take a shot at him or that there might be a zombie attack or maybe a jack booted government thug was going to walk in demanding his gun. At any rate, I hope he now thinks twice about carrying a gun around in his pocket in a public place where the public is gathered for a good time. And he's pretty darned lucky that the bullet only injured himself and not someone innocent person. From the article:

"A man accidentally shot himself in the leg while bowling at Jupiter Lanes about 7:30 p.m. Tuesday, police said. Witnesses said the man had been carrying a gun in the pocket of his shorts.

"The guy just stepped up to bowl," Jim Miller said. "I think he hit his leg on his back swing."

Added fellow witness Mike Martin: "The ball hit him in the leg, which triggered the revolver."

Police have not identified the victim, but witnesses said he limped back to his seat, holding his leg. His injuries were not considered to be life-threatening.

"Everybody kind of stopped," witness Debra Dean said. "We were way down on this end. Everybody was looking, and all of a sudden you can tell something wasn't right."

He was taken to St. Mary's Medical Center as a precaution."

Embedded within the article is this: " REMEMBER THIS? NFL star Plaxico Burress shoots himself in leg at nightclub". Yes. I remember that incident. He ended up being charged with several crimes and served time. The reckless gun owner at the Florida bowling alley was a legal permit holder. I thought those folks were supposed to be safe with their guns. Most people assume that the 2-3% of people who choose to carry loaded guns around in public know what they are doing with their guns. They would be wrong. Read Ohh Shoot for how often legal gun owners misuse their guns. It's frightening. The more guns there are in more public places, the more often we will be reading stories about this stupid and dangerous behavior. For only 2.5 hours of training and $65 a Florida resident can carry a loaded gun around in public. Reassuring.

I just referenced other places where you can find accidental gun discharge incidents in my last post about gun contradictions. I suggest you read them. You will be surprised at how often this is happening in America. Most often, the shooter him or herself is the injured party. But too often it's kids. Guns are dangerous. People must believe that the danger of carrying or owning a lethal weapons designed to kill offsets the danger of having that weapon used against oneself or someone close by. Remember what NRA Executive VP said after the Sandy Hook shooting? "The only thing that stops a bad guy with a gun is a good guy with a gun."

Really Wayne? The Florida bowler was a good guy. This Aurora, Colorado school security guard was supposed to be keeping children safe. And look what happened:

Aurora Police are investigating an accidental shooting at a parking lot at Rangeview High School that left one student with a "significant injury" on Monday.

Close to an hour after school had been dismissed on Monday, a male student was accidentally shot in the leg by an adult who police say "works at the school, but is not a teacher," in a press statement.

The victim was rushed into surgery and is expected to survive.

The names of the victim and the school employee are not being released by the police.

What would Wayne LaPierre have to say about these incidents given his hyperbolic and fear mongering rhetoric? Not much. Listen to his ludicrous statement above in the context of these many incidents I have cited on this post and many others. Where is common sense? The gun culture is rife with people like the above and too often we just shrug it off. We can't do that anymore. 49 states have passed laws allowing people to carry guns in public places. That is because the NRA lobbyists and apologists convinced lawmakers that only law abiding people would carry their guns around and they would actually protect the rest of us in public places. Poppycock. It's just not happening. People are being shot accidentally in public places all over this country. A bowling alley should be safe from bullets discharging from a bowler's gun. And while we are talking about bowling and bullets, how can we forget the first film to be made about a mass shooting in America- Bowling for Columbine- about the Columbine school shooting and our nation's loose gun laws. Michael Moore had it right though he took a lot of criticism at the time. We are better than this. Until our lawmakers figure out that they were fooled, we are stuck with these laws and we are also stuck with the potential for people to be shot by "responsible law abiding" gun owners.
Posted by japete at 1:41 PM