Senators against a vote on common sense gun laws 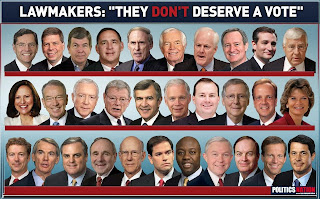 As opposed to the above named Senators, 21 NRA A rated Senators voted in favor of cloture and proceeding to a floor discussion and vote on the gun issue. They decided that common sense was more important than their NRA rating. Good for them. They should be congratulated. I am quite sure that they are taking a lot of flak from the NRA lobbyists ( pardon the pun). From the above article:

Among those who voted against the filibuster were 21 senators, from both parties, who have received either an A+, A, or AQ rating from the NRA, according to Washington Post reporter Ed O'Keefe. Those cherished grades will not be affected by this morning's cloture vote. But the NRA warned today that how senators vote on the Manchin-Toomey (and Schumer-Kirk) background check proposal (which will be voted on as an amendment to the main bill), as well as the final cloture vote (which would allow an up-or-down vote on the bill's final passage) will be included in their scores.

It's unclear, as of now, how many senators who voted this morning to allow debate on the bill will ultimately vote to actually pass the bill. For a lot of them, that decision will depend on the finer details of the bill and how it's amended between now and then. But 21 NRA-approved senators decided this morning that they care more about strengthening the nation's gun laws than the threats of the gun lobby. There was a time not so long ago when that would have been unthinkable.

So the NRA warns lawmakers. Should they be afraid? Or is it true that lawmakers are not going to take them as seriously as they take the victims of mass shootings. After looking into the eyes of the family members of little children massacred on 12/14, why should any lawmaker worry about the NRA lobbyists? They should worry about the parents and the sisters, brothers and other relatives of victims. The victims have been brave enough to put aside their grief to come to the Capitol to lobby. The Newtown families have shown incredible courage and fortitude:

The stories lawmakers heard are much like those the families told on “60 Minutes,” where Hockley said she put her son’s ashes in an urn on her bedroom dresser: “Every night I beg for him to come to me in my dreams so that I can see him again. And, during the day, I just focus on what I need to do to honor him and make change.”

The day after the show aired, Obama, speaking in Connecticut, repeated those words of Hockley’s. “If Nicole can summon the courage to do that, how can the rest of us do any less?” he asked.

The Newtown families know what they want. They want some peace and some closure to the death of their child, their sister, their mother. They want lawmakers to act so others won't need to be begging for our leaders to do the right thing. They shouldn't have to beg. Why should this be so hard? Why do those Senators who voted with the NRA think that the gun industry and an increasingly strident and irrelevant organization is more important than the victims? Their priorities are misplaced.

The NRA lobbyists and leaders are finally meeting their match- the people's lobby. Yesterday after the cloture vote a statement was issued from the new organization formed by Representative Gabby Giffords and her husband Mark Kelly. They are watching Senators, too. We all are. They will be held accountable for their votes by the people's lobby- the majority of Americans who want common sense and the many many families of victims of gun violence. Here is more from the statement:

"Today's vote is an important first step towards reducing gun violence," Pia Carusone, the group's executive director, said in a statement. "We commend Senator Manchin and Senator Toomey for their hard work and success in finding compromise on common sense solutions and protecting the second amendment."
To those senators who voted 'no' Thursday, the group warned they would educate their constituents about the vote:

To the senators who voted no today: We regret your attempt to obstruct debate and deny a vote to the families of Newtown, of Tucson, of Aurora, and countless other communities across the country. Americans deserve better than the loyalty to the corporate gun lobby that you displayed today. With our help, your constituents will be educated and reminded of your actions today and in the coming weeks ahead.

Together they began a 24-hour vigil over more than 3,300 crucifixes, Jewish stars of David, Muslim stars and crescents, and Indian Sanskrit inscriptions — one for each gun-related death in America in the four months since Newtown.

To the east, up on Capitol Hill, the US Senate voted Thursday to debate the most ambitious gun safety legislation in nearly two decades, after a bipartisan group of lawmakers agreed on expanding background checks for firearm sales.

“The hard work starts now,” said Senate majority leader Harry Reid after the 68-31 vote on the proposal championed by President Barack Obama that would also stiffen penalties for gun trafficking and ramp up school safety.

For the bishops, pastors, rabbis and reverends on the Mall, including several from Newtown, that work should have started long ago.

“It doesn’t have to be this way,” said Jim Wallis of the Washington-based Christian activist group Sojourners, a co-sponsor of the vigil with PICO National Network, a faith-based grassroots organization.

“The nation is so far ahead of where the political leaders are” on gun control, he said.

“We don’t have a Second Amendment issue, we have a Second Commandment crisis,” said Crebbin, who led the small town’s interfaith service attended by Obama two days after the Sandy Hook school shootings.

Michael McBride of The Way Christian Center in West Berkeley, outside his native San Francisco, told AFP that in the last five years, “I’ve had to bury seven teenagers” killed by guns.

“It’s not that I get phone calls in the middle of the night to do the (funeral) service,” he said. “I actually have to show up sometimes at the scene of the crime. I have to go to the homes where the family is mourning.

“I have to go to the hospital and comfort siblings who can’t understand why brothers and sisters have been shot… and then we have to live with the aftermath of the trauma that has been caused.”

People closest to gun violence are the ones who push the hardest for change to our laws. They understand what this is all about. Shame on the lawmakers who can't understand what this is all about. The victims have had enough. Most Americans have had enough. It's time for action so let's get to work. People are dying while we are waiting for action.