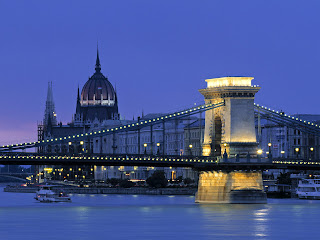 So we are at the end of a wonderful trip on the Danube river. It will be sad to finish with this adventure but as always, good to be home again. We are ending in Budapest in Hungary. This is the 5th country on the tour. We have been to Germany and Austria once before on another trip many years ago. But the Czech Republic, Slovakia and Hungary are totally new places for us. The lovely Budapest is often called the city of lights. We will be experiencing an evening cruise on the Danube to celebrate the end of our trip. Budapest has a fascinating and varied history with a diverse population. Here is more from the article above:

"Cited as one of the most beautiful cities in Europe,[1][19][20] its extensive World Heritage Site includes the banks of the Danube, the Buda Castle Quarter, Andrássy Avenue, Heroes' Square and the Millennium Underground Railway, the second oldest in the world.[19][21] Other highlights include a total of 80 geothermal springs,[22] the world's largest thermal water cave system,[23] second largest synagogue, and third largest Parliament building. The city attracts about 4.3 million tourists a year, making it the 25th most popular city in the world (and the 6th in Europe) according to Euromonitor.[24]

Considered a financial hub in Central Europe,[25] the city ranked 3rd (out of 65 cities) on Mastercard's Emerging Markets Index,[26] and ranked as the most livable Central/Eastern European city on EIU's quality of life index.[27][28] It is also ranked as "Europe's 7th most idyllic place to live" by Forbes,[29] and as the 9th most beautiful city in the world by UCityGuides.[30] It is the highest ranked Central/Eastern European city on Innovation Cities' Top 100 index.[31][32]

Budapest is home to the headquarters of the European Institute of Innovation and Technology (EIT),[33] and the first foreign office of the China Investment Promotion Agency (CIPA).[34]"

Check out its' ancient past from the article:


The first settlement on the territory of Budapest was built by Celts[11] before 1 AD. It was later occupied by the Romans. The Roman settlement - Aquincum - became the main city of Lower Pannonia[11] in 106 AD.[11] The Romans constructed roads, amphitheaters, baths and houses with heated floors in this fortified military camp.

Wow- heated floors. And we thought we were innovative. We have heated floors in our kitchen at home and in the basement addition at our cabin. I guess we're not so smart after all. It's always a litte unnerving to find out that people who inhabited the world long before us knew about things we thought were our inventions.

Anyway, let's talk about the gun laws of Hungary. There were 13 total gun homicides in Hungary in 2010 with a rate of .13/100,000. Suicide by gun was .72/100,000 in 2010. Again, licensing and registration is required and it's difficult to own a semi-automatic weapon and handgun. So consistency is the case in these eastern European countries. That's a good thing because, unlike in America where each state has different gun laws, when laws are consistently strict, guns are less likely to transported from one country to another easily.

So our trip has ended and I have learned a lot. I hope my readers liked my travelogue as well as comparisons of gun laws country to country. In the U.S., just to remind my readers, the gun homicide rate was 3.6/100,000 in 2011. Gun suicides were 6.3/100,000 in 2011. We have among the weakest gun laws in the world. Do we need more proof that common sense gun laws will make a difference?