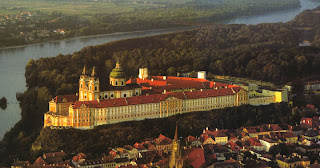 So Linz, Melk and Vienna are the cities we are visiting in Austria along the Danube. I am really excited about seeing these cities. Vienna, we all know, is famous for many things but most certainly for music and its' wonderful parks. It is a city known for its' culture. Linz is also known for its' art and music scene with many museums and and several beautiful churches and cathedrals. It has some other distinctions as well, if you call them that:


"Adolf Hitler was born in the border town of Braunau am Inn but moved to Linz in his childhood. Hitler spent most of his youth in the Linz area, from 1898 until 1907, when he left for Vienna. The family lived first in the village of Leonding on the outskirts of town, and then on the Humboldtstrasse in Linz. After elementary education in Leonding, Hitler was enrolled in the Realschule (school) in Linz, as was the philosopher Ludwig Wittgenstein. Notorious Holocaust architect Adolf Eichmann also spent his youth in Linz. To the end of his life, Hitler considered Linz to be his "home town",[4] and envisioned extensive architectural schemes for it, wanting it to become the main cultural centre of the Third Reich.[5] In order to make the city economically vibrant, Hitler initiated a major industrialization of Linz shortly before, and during, World War II."

Melk has an imposing and magnificent Benedictine Abbey ( pictured above):

Today's impressive Baroque abbey was built between 1702 and 1736 to designs by Jakob Prandtauer. Particularly noteworthy is the abbey church with frescos by Johann Michael Rottmayr and the impressive library with countless medieval manuscripts, including a famed collection of musical manuscripts and frescos by Paul Troger.
Due to its fame and academic stature, Melk managed to escape dissolution under Emperor Joseph II when many other Austrian abbeys were seized and dissolved between 1780 and 1790. The abbey managed to survive other threats to its existence during the Napoleonic Wars, and also in the period following the Nazi Anschluss that took control of Austria in 1938, when the school and a large part of the abbey were confiscated by the state.
The school was returned to the abbey after the Second World War and now caters for nearly 900 pupils of both sexes.
Since 1625 the abbey has been a member of the Austrian Congregation, now within the Benedictine Confederation.
In his well-known novel The Name of the Rose, Umberto Eco named one of the protagonists "Adson von Melk" as a tribute to the abbey and its famous library[citation needed].

Vienna doesn't need much introduction. But here is more to expound a bit about the city:

Apart from being regarded as the City of Music[8] because of its musical legacy, Vienna is also said to be "The City of Dreams" because it was home to the world's first psycho-analyst - Sigmund Freud.[9] The city's roots lie in early Celtic and Romansettlements that transformed into a Medieval and Baroque city, the capital of the Austro-Hungarian Empire. It is well known for playing an essential role as a leading European Music Centre, from the great age of Viennese Classicism through the early part of the 20th century. The Historic centre of Vienna is rich in architectural ensembles, including Baroque castles and gardens, as well as the late-19th-century Ringstrasse lined with grand buildings, monuments and parks.[10]
In a 2005 study of 127 world cities, the Economist Intelligence Unit ranked the city first (in a tie with Vancouver, Canada) for the world's most livable cities (in the 2012 survey of 140 cities Vienna was ranked number two, behind Melbourne).[11][12][13] For four consecutive years (2009–2012), the human-resource-consulting firm Mercer ranked Vienna first in its annual "Quality of Living" survey of hundreds of cities around the world.[14][15][16][17] Monocle's 2012 "Quality of Life Survey" ranked Vienna fourth on a list of the top 25 cities in the world "to make a base within" (up from sixth in 2011 and eighth in 2010).[18][19][20][21]
The city was ranked 1st globally for its culture of innovation in 2007 and 2008, and fifth globally (out of 256 cities) in the 2011Innovation Cities Index, which analyzed 162 indicators in covering 3 areas: culture, infrastructure and markets.[22] Vienna regularly hosts urban planning conferences and is often used as a case study by urban planners.[23]
Each year since 2005, Vienna has been the world's number one destination for international congresses and conventions.[24]Vienna attracts about five million tourists a year.[25]

Wow. I hope we won't be one of millions while touring Vienna. I am quite excited to visit Vienna and perhaps take in a musical event while there.

O.K. Let's look at Austrian gun laws. Austrians seem to own a lot of guns but had only 15 gun homicides in 2010. Yes, I said 15 total gun homicides. That's a rate of .18/100,000. Suicides were higher at 2.68 per 100,000. It is interesting that most gun deaths in most countries are suicides. Handguns and semi-automatic weapons are only allowed with special authorization. From the above linked article:

In Austria, only licensed gun owners (for handguns)40 36 38 may lawfully acquire, possess or transfer a firearm or ammunition......
Applicants for a gun owner’s licence in Austria are required to prove genuine reason to possess a firearm, for example, hunting, target shooting, collection, personal protection, security41 (...)
In Austria, the law requires43 that a record of the acquisition, possession and transfer of each privately held firearm be retained in an official register

Once again, strong gun laws equal very few gun deaths. Gun laws work. We should try it in the United States and see how it works. Good idea, right? It's very clear that Austrians have a lot of common sense regarding guns and gun laws.
Posted by japete at 11:42 PM