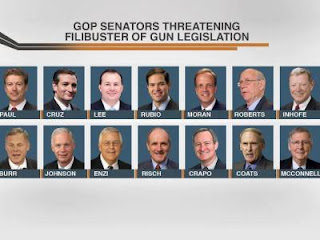 The Republicans are trying to hide from having to vote on a common sense gun bill. Why? Ask them. Here they are. What are the 14 Senators who say they will filibuster the omnibus gun bill thinking? They aren't, I guess. I have not heard many people who have not been outraged by this boorish and insensitive behavior. When even the Senate Minority Leader, Mitch McConnell, joins the filibuster threat, you know it is an unusual situation. What is so unusual? Let's start with the fact that 20 first graders were massacred on 12/14. That was unusual. That requires unusual solutions. Of course, in every country but America, passing reasonable gun laws after a horrific massacre like that of 12/14 is a no brainer and nothing unusual. But this is America. Apparently these Senators don't care about those victims and their families who are demanding a vote. Many in their own party are saying no to a filibuster and talking about how ludicrous it is to deny a vote on the floor after what happened at Sandy Hook elementary school. From the article:

"Let this come to a debate ... Even if it doesn't go down the way I want it to, I think the American people are entitled to a debate. To me, to use Senate rules to block a debate on an issue of this importance is just wrong," said King on CNN on Tuesday morning. "It's not like something is trying to be snuck through here. This is something that warrants a full and open debate."
King supports universal background checks, unlike many members of his party. But he said that even if he didn't have that position, he would still support allowing the bill come to the Senate floor.
"To stifle debate and cut it off almost makes it as if these senators are afraid of something," said King. "I don't know what they're afraid of. If they're so sure of their position, let it come to a debate."
Strengthening background checks for gun sales is enormously popular with the public. A recent poll found that nine in 10 Americans favor universal background checks.

Representative King understands that the public has spoken and the public is expecting that the Senate will vote on an issue of such great import and such great support. Too bad his colleagues just don't get it.

Senator Harry Reid gets it. He wants a vote and a debate which could begin later this week. From the article:

The emerging deal would expand required federal background checks to sales at gun shows and online, but exempt transactions like face-to-face, non-commercial purchases, said several Senate aides and lobbyists who spoke on condition of anonymity to describe the private talks.

Currently, the checks are required only for sales through licensed gun dealers.

On the Senate floor, Reid pointed to a poster-sized photo of a white picket fence that had slats bearing the names of the Newtown victims.

"We have a responsibility to safeguard these little kids," said Reid, D-Nev. "And unless we do something more than what's the law today, we have failed."

"We don't have the guts to stand up and vote yes or no? We want to vote maybe? Tell that to the families in Newtown" and other communities where there have been mass shootings, said Senate Judiciary Committee Chairman Patrick Leahy, D-Vt.

But Sen. Ted Cruz, R-Texas, one of 13 conservative senators who signed a letter promising to try blocking debate, said the Senate bill puts "burdens on law abiding citizens exercising a constitutional right." He said none of its provisions "would have done anything to prevent the horrible tragedy of Sandy Hook."

Nonsense, Senator Cruz. That is the oldest trick in the book. If we pass this law, it won't stop all of the bad things from happening. I have an idea. Let's not pass any laws just in case they won't work or won't affect change. That kind of talk is cynical and bogus. If Adam Lanza had had smaller ammunition magazines with him, like the 10 and 20 round magazines he left at home, at the least, more Newtown children would be alive today. If a universal background check provision were in place, people who shouldn't be able to buy guns would have had to look harder to get them. Why make it easy for people to get deadly weapons? That is why we require background checks for buyers at licensed dealers. There is a reason for that provision in our laws. As a country, we recognize that certain people shouldn't have access to guns. It works. Felons and adjudicated mentally ill people do try to buy guns from licensed dealers. They have been stopped over 1 million times since the FBI's system was put into place. This article highlights how many felons and others have been stopped from buying guns from licensed dealers since the NICS system started working just in the state of Virginia alone. The system works as it was designed to do by law. And that's a fact. Isn't it just plain common sense that if something is already working to stop felons and others from getting guns when buying from a licensed dealer, that expanding those same background checks to private sellers would do the same thing?

Let's deal in facts here, Senator Cruz. If people like Nancy Lanza weren't convinced by the NRA lobbyists that she needed an assault type rifle for self defense or hunting ( which she didn't) maybe she wouldn't have bought that kind of gun. There are many ways in which passing stronger gun laws would reduce and prevent senseless shootings. If we pass new laws we may just change the gun culture which might make people think twice about buying all of these guns in the first place. Just maybe, Senator Cruz, fewer massacres of little children would take place. But if you are protecting the gun industry instead of protecting children, you won't do the right thing. And what in the world are you and your friends in the Senate so afraid of? Why don't you want to take a vote on whether or not we can make our country a safer place? How often have you spoken to the NRA lobbyists in the past few months? How much money has the NRA funneled your way?

And speaking of NRA supported lawmakers, Oklahoma Senator James Inhofe seems to think that the Sandy Hook parents were convinced by President Obama to lobby Congress to pass reasonable gun laws. He thinks that the gun debate has nothing to do with them or the lost lives of their massacred children. The thing is, it has everything to do with these parents and the memories of their dead children. I was on a Facebook page last night where one of the Sandy Hook parents commented that the parents of these murdered children shouldn't have to beg our Congress members to do the right thing. She is right. They should just do the right thing because they want to stop little children from being massacred while sitting in school doing what little children are supposed to be doing. From the article:

Sen. James Inhofe (R-Okla.) said Tuesday that the gun control debate doesn't have anything to do with the families of the Newtown, Conn., shooting victims, and that the only reason those families think it does is because President Barack Obama told them it did.

Eleven family members of Newtown victims were in Washington on Tuesday, meeting privately with senators to urge them to support a forthcoming gun package that would impose tighter background checks, crack down on gun trafficking and enhance school safety measures. Speaking to a handful of reporters, Inhofe said he feels bad for those families because they're being used as pawns in a political fight.

"See, I think it's so unfair of the administration to hurt these families, to make them think this has something to do with them when, in fact, it doesn't," Inhofe said.

When it was suggested that the families of Newtown victims actually believe the gun debate pertains to them, Inhofe said, "Well, that's because they've been told that by the president."

I have never thought that the Senator from Oklahoma had much common sense. But really, could he be any more embarrassing to himself or his party? Who could possibly believe that losing a child to a horrific gun massacre wouldn't activate you to stop the next one? In the name and memory of the children, these parents want action. They want to save other parents from their anguish and grief. That is natural. President Obama didn't have to tell them anything. Senator Inhofe should take a seat and be quiet for the duration. He has nothing of any worth to offer to this discussion. In fact, he has just made it worse. His insulting statements put the NRA sponsored lawmakers right in the spotlight for their lies and innuendos. Shame on him and the other Senators who are putting gun rights, the gun industry and their own elections and money ahead of saving the lives of innocent children who went off to school on 12/14 and didn't come home again. We are better than this.

But there is hope that the public opinion and public pressure is finally getting to at least some of our Senators. Today there will be a press conference to announce a potential deal between "Blue Dog" Democratic Senator Joe Manchin of West Virginia and conservative Republican Senator Pat Toomey of Pennsylvania, a "Blue" state where a strong majority of residents on all sides of the issue favor background checks on all gun sales. Enough is enough. Let's get to work.

There is going to be a "filibuster the filibuster" today outside of the U.S. Capitol. It is sponsored by the many gun violence prevention groups working on common sense gun laws. From the article:

Gun control supporters and survivors of gun violence are gathering Wednesday in the Capitol to read the names of the 3,300 killed from guns since the Newtown shootings and protest a potential filibuster of gun legislation.

"Until the Senate agrees to debate and vote on legislation to prevent gun violence, families of victims and survivors of gun violence will stand up to give voice to those who have been senselessly murdered since Newtown by reading the names of each person who has been killed," reads a release from the Brady Campaign to Prevent Gun Violence, Coalition To Stop Gun Violence, Mayors Against Illegal Guns, Moms Demand Action for Gun Sense in America, Newtown Action Alliance, Project End Gun Violence and Protest Easy Guns.

While the names are read in Washington, a parallel reading of the names of those killed by gun violence will take place in Newtown, Conn., outside the city's Edmond Town Hall.

The protest could be an emotional and powerful answer to the Republican senators who have called for a filibuster before a vote on gun control legislation even happens.

Real people are dying every day in America. If you don't believe this is happening, read this great blog from Joe Nocera of the New York Times. He is keeping track of daily shootings in "The Gun Report." This report shows how many accidental shootings are happening every day as well as homicides. Suicides are not usually reported in the media so there are many more incidents of gun deaths that are not reported in this blog. If people start understanding the devastation caused to families and communities all over this country from guns and bullets, they might just get louder about demanding change to our laws and changes to our gun culture. This is just plain not acceptable any more. We are tired of this. It's time for action.
Posted by japete at 7:36 AM