April Fools and the NRA 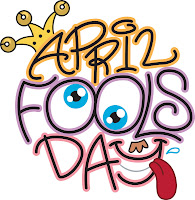 It's April Fools Day and the NRA is out fooling citizens and lawmakers alike. They have fooled many into thinking that passing any gun laws violates the rights of law abiding gun owners. They are wrong, of course, but they are still getting away with it. Thank goodness, they are not getting away with as much as they did before 12/14. For after 12/14, everything changed in America. The citizens' lobby is watching the NRA lobbyists and also the nations' lawmakers to make sure they will do the right thing after the Sandy Hook school shooting. President Obama is firm in his support for common sense gun laws. More Senators are coming on board as they finally understand that national polling in support of reasonable gun laws actually means something. Given the Sandy Hook massacre, we shouldn't be waiting for Congress. There is no logical explanation for their inaction. This great article by Adam Gopnik from the New Yorker helps explain the foolishness of the NRA lobbyists and leaders:

What makes a correlation causal? Well, it should be robust, showing up all over the place, across many states and nations; it should exclude some other correlation that might be causing the same thing; and, ideally, there ought to be some kind of proposed mechanism that would explain why one element affects the other. There’s a strong correlation between vaccines and less childhood disease, for instance, and a simple biological mechanism of induced immunity to explain it. The correlation between gun possession and gun violence—or, alternately, between gun control and stopping gun violence—is one of the most robust that you can find. And the mechanism that connects weak gun laws to gun murders and massacres is self-evident: with guns around, ordinary arguments escalate into ones where someone gets killed, and crazy kids who dream of getting even with the world can easily find a gun—or, like Adam Lanza, many guns—to do it with.

One sign of the robustness of the correlation is that the counterarguments are either easily explodable pseudo-science or stories that people tell each other on Internet forums. “If he’d had a knife, he’d use that!”—well, yes, he would have, and the kids In Newtown would be alive today. In response to real social science, with its cautious but solid correlations, you get obscene, Tarantino-style fantasies—“If the kindergarten teacher had had an assault weapon of her own, loaded, primed, and ready to fire, this wouldn’t have happened!”—and stray tabloid anecdotes—“I heard about this woman, she had a gun, and the marauders just saw it and…” Indeed, that’s the favorite absurdity of the moment: to insist that it doesn’t matter whether or not there’s any evidence that guns are used effectively on any scale in self-defense, because the incidence of gun use doesn’t accurately track the millions of times that the mere sight of a gun in the hands of a housewife scares off the bad guys, causing murderers otherwise determined on mayhem to run away screaming.

Finding a correlation, eliminating a correlation, proposing a correlation—these are not inconclusive fitful stabs at truth: they are meaningful acts. And when you put them together with many other similar, even stronger correlations, a cause stares you in the face and asks you to sit down and take it seriously. To believe that gun laws don’t work, you have to believe that each of the many studies showing that gun laws limit gun violence—all of them, every single one, from Canada to Australia and back home—are not just flawed at the margins or somewhat inconclusive but that they are fundamentally, entirely, completely, round-the-block wrong. And that isn’t a plausible claim.

Common sense confirms what social science correlates. The United States, after all, is hardly the only rich country in the world with laws. American insularity and the ignorance of others is powerful, but it need not be quite so absolute. There are (here we go again!) many countries that resemble ours in wealth and history; they have different gun laws, and they have much lower levels of gun violence. They have about the same incidence of crazy people, but after they have one psycho gun massacre they take action, and then very rarely have another. Meanwhile, the desperately dim efforts to equate some other potentially dangerous thing—cars or trucks or alcohol or airplanes—with guns gets more ridiculous each time they’re attempted. Many good things can have bad consequences in the wrong circumstances. What ought to be done—indeed, exactly what we often do—is to limit the dangerous consequences while allowing for the good ones. That’s why we do things like regulate who drives cars, put warning signs for pregnant women on wine, demand licenses on dogs, check people for box cutters before they board airplanes—all common-sense activities by which we attempt to regulate the risks of our pleasures. (And the Second Amendment has only very recently, and radically, been read as assuring an individual right to guns.) (...)

If American had gun laws like those in Canada, England, or Australia, it would have a level of gun violence more like that of Canada, England, or Australia. That’s as certain a prediction as any that the social sciences can provide. To believe that gun control can’t work here is to believe that the psyches of Americans are different from those of everyone else on earth. That’s a form of American exceptionalism—the belief that Americans are uniquely evil and incorrigibly violent, and that nothing to be done about it—that doesn’t seem to be the one that is usually endorsed.

Keep the laws as they are, and the shootings, very often of children and high-school and college students, will go on. The President put it well on Thursday: “It won’t solve every problem. There will still be gun deaths. There will still be tragedies. There will still be violence. There will still be evil. But we can make a difference if not just the activists here on this stage but the general public—including responsible gun owners—say, You know what, we can do better than this. We can do better to make sure that fewer parents have to endure the pain of losing a child to an act of violence.” That’s what the correlations show, and they show it beyond a reasonable doubt. Change the laws and more will live; keep them, and more children die. That’s not an emotional statement; it’s merely a descriptive one. It’s not a complaint—or really, any longer, a cry of pain. It’s not even a commentary. It’s just a certainty.

We've been fooled. Or I should say that some people have been fooled. Others of us have known for quite a while that the NRA hysteria was just that- hysteria. For to pass common sense gun laws will surely stop some of the shootings. How could it not? To say otherwise is cynical and irresponsible. There is absolutely no reason not to pass some laws to address our foolish inaction regarding gun safety and gun violence. In the discussions since 12/14, many many solutions have been offered and some have taken effect. New York and Colorado have passed reasonable gun laws. Other states are considering gun safety laws. The U.S. Senate is about to take a vote on a bill that will include universal background checks with some exceptions, some anti-trafficking measures and school safety measures. This is the very least we can do. Only a fool would think that passing laws like this would be a bad idea. It's simply not a bad idea to save lives. It's time to stop the foolish allegations and fear mongering about what new gun safety laws would mean. The NRA is trying to make fools out of all of us and that is what we will be if we don't take action soon. If the lives of 20 first graders taken so brutally don't move us as a country to do what we all know is right, then who are we? I know we are better than this.

Don't be fooled by the NRA lobbyists. They are full of fear, paranoia and increasing stridency as they see that the American culture is changing post 12/14. The public is now strongly in favor of background checks and even an Assault Weapons Ban. That is not what the NRA lobbyists have been tauting for the past several decades. They have fooled our lawmakers into thinking that the majority of people don't want them to pass gun safety laws. Many lawmakers are not allowing themselves to be fooled any longer. The public is way ahead of its' elected leaders on this issue. President Obama gets it. Moms get it. (And speaking of Moms, check out the armed fools who came to a rally of the Moms Demand Action for Gun Sense in St. Louis, Missouri. This is another stupid and intimidating tactic perpetrated by NRA lobbyists and their supporters.) NRA members get it. Gun owners get it. Most everyone else in the country gets it. We will not be fooled any more by this group of paranoid people who are propping up an industry that sells guns and ammunition. The industry lobbyists are in bed with the NRA lobbyists. They must keep sales up. They must find ways to get people to buy ever more guns just in case the government will come around with "jack booted thugs" and black helicopters to confiscate their guns. I mean, you just never know. It could happen, right? Don't be fooled by this rhetoric.

As President Obama said in the linked Washington Post article above: "Shame on us if we've forgotten Newtown." The video below is his speech from the White House last week when he continued to push for common sense gun laws in the aftermath of the Sandy Hook school shooting:


We can't forget Newtown. Don't let the fools rush in and prevent reasonable measures to take place that will make our communities safe from gun devastating gun violence.

Oops. I guess Republicans were just fooling us when they said they supported background checks right after the Sandy Hook shooting. Who's fooling who? Are they for them or against them? Don't take us for fools. Watch below: