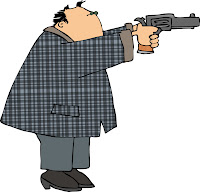 To shoot or not to shoot, that is the question. There is an obvious difference between the gun rights advocates who are afraid that wherever they go there is danger and the rest of us. The problem with this theory is that more people are shot in gun homicides, suicides and accidents than are in justifiable self defense shootings. This is born out on a daily basis. All one has to do is read the paper or watch the news for proof. So, this morning, as I was reading my own paper on-line while on a long week-end getaway with my family, this story jumped out at me. Let me elaborate, from the story:

"At 8:14 a.m. on Tuesday, March 12, a caller in the 300 block of Cari Park Lane reported that he awoke to find an intoxicated man sleeping on his couch.

The drunk man was thrown out of the home, but he then proceeded to start banging on the door of the home. Officers arrived and spoke with the man.

He told officers he lived at the residence and was confused as to why he was kicked out of his own residence.

He told officers that he entered the home through an unlocked sliding door. He went to sleep on the couch and had urinated on himself.

He was not charged but was taken to detox."

Had that been the home of an NRA gun owner whose fear and paranoia was on steroids, this story could easily had a different end. Yes, this man entered a home illegally. He thought he was at his own home but didn't realize he wasn't because he was drunk. He did no harm except to bang on the door once he was thrown out. Would someone with a loaded gun have shot him? Possibly. But the outcome was that a drunk man was taken to detox. He is still alive and the homeowner wasn't responsible for taking another human life. As I have written too often in this blog, there are some stories that end quite differently.

Too many stories come to different ends. The recent shooting at the Marine base in Virginia is a prime example of such. Guns are used to "solve disputes" or take a life over marriage problems, depression, in accidental shootings, in a rage, etc. Several new blogs are writing about the daily carnage. One is "The Day in Violence" by New York Times writer Joe Nocera. After the Sandy Hook school shooting, Nocera decided to call attention to what's going on in America every day. It's disgusting and disturbing and something the NRA lobbyists don't want us to know about. For if we see how much carnage is happening, we might change our views about guns. And that would not be good for the gun industry or the NRA membership rolls. Note that in this latest Nocera article there are a number of accidental shootings. Guns in the home are dangerous when there are children and vulnerable adults in the home. I refer often to the Ohh Shoot blog and now a new one, Today's Accidental Shootings, devoted only to accidental shootings. It's no fun reading these blogs for they explain the gun culture in America that no other country has.

And, what does it mean that this latest gun incident at a Walmart store was an inside job?


"Investigators said the heist appears to be an inside job. All the money was picked up at the registers at 10:55 p.m. and taken to the back, just minutes before the robbers came in. This time differs each night.

The armed men walked into the store and went directly where the money was being counted. They quietly put the money in a grocery cart and pushed it out to their car."

Does it mean that these assault type rifles, sold at Walmart stores all over the country and claimed to be necessary for self defense and hunting, were used by friends or relatives of a Walmart employee? Is this why those type of guns are "needed" in America? Or is it because mass shooters understand that assault type rifles hyped falsely by the NRA lobbyists as necessary to self defense in the home and varmint shooting, are quite effective for shooting a lot of little kids at one time quickly while inflicting as much harm to a child's body as possible? I'm just asking. Until we continue asking these questions and getting answers, we won't solve our nation's problems with too many daily shootings and massacres of children at schools. We must keep these questions before our leaders because at some level, their consciences know that something must be done but they are too afraid of the ugly noise coming from the gun rights extremists to tackle this important and deadly public health and safety crisis in America.

In what other country do children and teens with guns shoot and kill a baby in a brutal robbery attempt gone wrong?

A pair of teenagers was arrested Friday in the most recent shooting. West had just been to the post office a few blocks from her apartment Thursday morning and was pushing her son, Antonio, in his stroller while they walked past gnarled oak trees and blooming azaleas in the coastal city of Brunswick.

West said a tall, skinny teenager, accompanied by a smaller boy, asked her for money.

"He asked me for money and I said I didn't have it," she told The Associated Press on Friday from her apartment, which was scattered with her son's toys and movies.

"When you have a baby, you spend all your money on babies. They're expensive. And he kept asking and I just said `I don't have it.' And he said, `Do you want me to kill your baby?' And I said, `No, don't kill my baby!'"

One of the teens fired four shots, grazing West's ear and striking her in the leg, before he walked around to the stroller and shot the baby in the face.

This is wrong on so many levels. Do our leaders read these stories? Do they know that babies are being shot on our streets? If so, why are they still doing the bidding of the NRA lobbyists? Even now, after the 12/14 massacre, our leaders are planning votes on the first gun violence prevention measures in years. And the NRA lobbyists are fiercely protecting the gun industry and their own jobs by trying to water down the simplest of bills that could stop some shootings. The bill that passed out of the Minnesota House Public Safety Committee was a watered down version of even the most basic of ideas- requiring the sale of guns at gun shows to go through background checks. It's not enough. The NRA extremists claim that paperwork from private gun sales will lead to gun registration is bogus and total hyperbole. The background check system that has been in place for over 20 years has not led to gun registration. Neither will expanded checks done by private sellers.

This is just not seen anywhere else in the world. In the aftermath of the most horrific school shooting in America, it's unconscionable that we would not do as much as possible to stop the next one. But then, common sense is not part of the conversation, apparently. It's time to act. If not now, when. Lives depend on our leaders doing the right thing.