Hiding from the NRA lobbyists 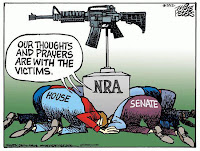 It's clear that even though there is strong evidence to the contrary, our leaders are still running away from the NRA lobbyists. I've talked before on this blog about the mythical power of the NRA and about the true agenda of the organization, which is to protect the gun industry rather than our children. Our leaders are reading the wrong tea leaves. They should not be hiding from the truth and from popular support for gun violence prevention measures now before them. Public opinion, including those who are NRA members, is clearly on the side of common sense gun legislation. And yet, our leaders are running and hiding. They are hiding from the wrong group of Americans. They are hiding from the daily carnage in the news and from one of the most heinous shootings in our history. Shame on them. The New York Daily News has it right:

Mark this day — for it is the day that the United States Senate, cowed by the National Rifle Association, failed 20 murdered children.

On Tuesday, the “world’s greatest deliberative body” turned tail and ran from a life-or-death fight. Having promised the American people a robust package of gun control measures that would keep machines of murder out of the hands of criminals and the deranged, the Senate disgracefully bowed to the gun lobby and buckled on the assault weapons ban.

Which means the tool of death that Adam Lanza wielded in Newtown on that darkest of days — squeezing its trigger again and again and again, ripping apart first-graders one after the other — can now be used by tomorrow’s Adam Lanzas.

The measure, assembled by Sen. Dianne Feinstein and her fellow Democrats, had been written into the strong gun-control legislation committed to by President Obama and passed by the Senate Judiciary Committee just last week.

In sum, it would also strengthen school security; stiffen penalties and prosecution for gun trafficking, and mandate background checks for all weapons purchases.

But now, it will move to the Senate floor without the piece that took specific aim at the most destructive firearms a civilian can buy.

It was supported by 55% of Americans and 127,000 Daily News readers who signed a petition urging the ban.

It was gutted to please those who make millions selling AR-15s and their accessories. To satisfy those who’ve perverted the Second Amendment into a right to carry high-powered artillery.

The type of weapon that also killed 13 moviegoers in Aurora, Colo. And that murdered 12 students and teachers at Columbine High School in Littleton, Colo.

Blame, foremost, the Republicans and wavering Democrats in thrall to the merchants of death that go by those three infamous letters, NRA. But point fingers at all those who wavered.

Now it is imperative that the measure — which will survive as a destined-to-die amendment sponsored by Feinstein — move to the floor of the Senate.

Should civilians be allowed to wield weapons of war with the capacity to murder dozens of boys and girls in the blink of an eye? “Yea” or “nay.”

All elected officials must have the guts to stand up and answer: Are you with the kids or with those who want to enable their killers?

Are you with us or against us elected leaders? You can't have this both ways. Either you believe that protecting the lives of our children and all citizens is important enough for you to stand up to a paper tiger or you have sold your soul. This is not about you and your re-election. This is 20 about little children losing their lives while sitting in a school classroom on a December day in Sandy Hook elementary school. This is about 6 fathers shot to death at the Accent Signage Company shooting in Minneapolis. This is about 70 people shot while sitting in a movie theater in Aurora Colorado on a July evening, 12 of whom died after being massacred by a man who shouldn't have had a gun. This is what this is about.

And speaking of shootings, because we now know and believe that shootings of children can and do happen everywhere, there was a lockdown at a middle school in Minnesota today. It turned out to be a student who called in a false report of an active shooter in a school in New Prague. From the article:

Police have arrested a student in connection with an apparent hoax call about a school shooting in New Prague, the city’s police chief said.

Authorities believe the boy, 12, is the only one involved in the incident, Police Chief Mark Vosejpka said at a news briefing.

The 911 call reporting an “active shooter” at a New Prague middle school Wednesday morning turned out to be unfounded, but it resulted in all six of the district’s schools being placed in a lockdown and the cancellation of classes for all students for the rest of the day.

Shortly after 10 a.m., about two hours after receiving the call about a shooter, Scott County Sheriff Kevin Studnicka said, “We are giving the all clear in New Prague.”

A district official said the middle school was put on a “code red” lockdown soon after what police scanner chatter termed a “weapon complaint.” According to dispatch traffic picked up on police scanners, the initial 911 caller reported somebody had an AK-47 firearm and two people were injured in a middle school room. There is no indication that any those details panned out.

The thing is, it's believable after 12/14. The public now knows that an active shooter could take the lives of more precious children. And students know the same. I'm happy that this student was arrested. What makes a 12 year old child think that this is O.K.? Do we have so many school shootings in this country that our children are thinking about it to the point of playing this kind of hoax? What kind of country are we anyway? This is no small or laughing matter. This is serious business. And what if it had been true? Minnesota would have been the scene of the next school massacre. What would our legislators do about that? They could take measures to make this scenario less likely to happen. Time will tell if they will.

In Colorado, a comprehensive bill to require background checks on all private sales of guns, reduce the number of bullets in an ammunition magazine to 15 and requiring customers to pay for background checks was just signed into law by the Governor. It was a heavy lift and not without a lot of angry rhetoric and even threats. Thank goodness there are some lawmakers who decided that the lives of innocent people were more important to them than the hyperbole of the NRA lobbyists. If we can't, as a country, come together to decide that reasonable gun laws are important to public safety, then where are we? Oh yes, that's right. We have come together as a county. It's just our leaders who are hiding from the NRA lobbyists. We are not going to let them hide from us. They need to hide from the NRA lobbyists and stop doing their bidding. Lives are at stake.
Posted by japete at 11:58 AM