Get your guns or else.. 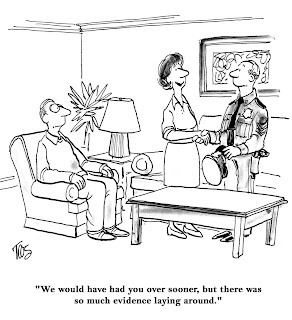 Isn't it interesting that the gun rights extremists are more than willing to give up some of their rights to privacy and government interference when it suits their own purposes? Surely requiring everyone in a community to own a gun fits this description. Read about it here:

"A town of 140 people in western Maine is considering an ordinance making gun ownership mandatory, the latest of a handful of communities nationwide to pass or consider such a rule even though the measures are widely considered unenforceable.

All three members of the Board of Selectmen in Byron favor it, and Head Selectman Anne Simmons-Edmunds said she expects residents to approve it at Monday's town meeting, a New England institution where townspeople vote up or down on municipal proposals.

"We're hoping that the town will get on board with us but will accept whatever the town wants," Simmons-Edmunds said Friday.

Communities from Idaho to Georgia have been inspired to "require" or recommend their residents arm themselves ever since a gunman killed 26 youngsters and educators Dec. 14 in a school in Newtown, Conn., and raised fears among gun owners about an impending restriction on Second Amendment rights.

The article up for a vote in Maine asks, "Shall the town of Byron vote to require all households to have firearms and ammunition to protect the citizens?"

Backed by gun rights supporters, the ordinance is intended to pre-emptively block gun-control laws, Maine Attorney General Janet Mills said, adding that it will be "null and void" even if it passes. It is pre-empted by a 2011 state law that bars municipalities from adopting firearm regulations. (...)

The idea has also caught on in Nelson, a city of just over 1,300 about 50 miles north of downtown Atlanta, where supporters of the gun-ownership proposal say light police patrols leave city residents virtually unprotected for most of the day.

The proposal contains several exemptions for people who object to owning firearms because of personal beliefs, religious reasons or mental disability. In a statement, Mayor Pro Tem Jonathan Bishop said convicted felons would also be exempted.

"I am in no way attempting to face off with the federal government, only doing what an elected official is supposed to do," Councilman Duane Cronic, who proposed the ordinance, said in an email Friday. The rule passed unanimously on its first reading and awaits a final vote April 1.

In Kennesaw, Ga., city officials worried at the time of its law's passage in 1982 that population growth in nearby Atlanta might bring crime to the community, which now has about 30,000 people.

And it has worked, he argued, with crime staying low.

Graydon acknowledged Kennesaw's ordinance is "unenforceable" and said no attempt has ever been made to do so.

Some communities don't go so far as to call for required gun ownership.

Spring City, Utah, moved forward with an ordinance this year "recommending" the idea of keeping firearms. Other ordinances have been passed in Virgin, Utah, and Cherry Tree, Pa., largely as symbolic gestures."

At least convicted felons would be exempt. That's a relief. What about dangerously mentally ill people or domestic abusers? What about those convicted of drug crimes? What about minors? Where do you draw the line? How will you know who is legal and who is not if this is a requirement? Will "jack booted government thugs" go door to door to make sure those in the home are actually legal gun purchasers? Will you invade their privacy? How will you enforce this law? I mean, shouldn't we make sure we enforce the gun laws we already have? What will happen if you refuse to have a gun? Will you be charged with a crime and sent to jail? Will you be fined? Remember now, these are the very same people who object to any paperwork requirements when a gun is purchased because it might lead to some sort of government record of gun ownership. How does this objection square with that point of view? Because of the stupid idea that a measure like this will keep the government from passing reasonable gun laws to keep us all safer in our communities, the NRA extremists are violating their own talking points. Hypocrisy as far as the eye can see.....

This article takes a look at the Georgia law that began this in the first place. Does everyone in this town own a gun or carry a gun? No. Why aren't they enforcing this law, then? Does everyone agree with this law? No. Then why pass this law in the first place? Making a political statement is one thing but we are talking about dangerous weapons designed to kill people. From the article:

A few blocks away, businesswoman Holly Jones, 49, also carries a gun. She’s been warming to gun control despite that, she said. Jones urged her daughters, 18 and 25, to avoid movies after the July theater killings in Aurora, Colorado, and is now afraid when her youngest goes to school.

After last week’s shooting, “I just cried all day,” she said as she painted flowers on a recycled wine bottle at her Painted Butterfly folk-art shop.

“I see both sides,” she said. “There’s the right to protect oneself, sure. I also see what the world is coming to. I really do think it’s come to the point where we need gun control. I just think the pros and cons don’t balance out anymore.”

As we all know, most reasonable gun owners, and even NRA members, want reasonable gun laws. I have written about that many many times before on this blog. NRA lobbyists don't like new gun laws, right? That's what they claim. But, wait- they love the gun laws that they, themselves, write and push on the public.This is ludicrous, stupid and dangerous. Where is common sense? A gun in the home is more likely to be used against you or someone in the home than to be used for self defense. Sure, guns are occasionally used for self defense in a home invasion or attack of some kind. But more often a gun is used in a suicide, homicide or accidental shooting. From the linked article:

“The main reason people give for having a handgun in the home is protection, typically against stranger violence,” he writes. “However, it is important to recognize that the home is a relatively safe place, especially from strangers. For example, fewer than 30% of burglaries in the United States (2003-2007) occur when someone is at home. In the 7% of burglaries when violence does occur, the burglar is more likely to be an intimate (current or former) and also more likely to be a relative or known acquaintance than a stranger. Although people typically spend most of their time at home, only 5% of all the crimes of violence perpetrated by strangers occur at home.”

In fact, adds Hemenway, research shows that most self-defense use of guns is not socially desirable. He describes one study in which “criminal court judges from across the United States read the 35 descriptions of the reported self-defense firearm uses from 2 national surveys and found that, even if description of the event was accurate, in most of the cases, the self-defense gun use was probably illegal. Many were arguments that escalated into gun use.”

“There are real and imaginary situations when it might be beneficial to have a gun in the home,” Hemenway concludes. “For example, in the Australian film Mad Max, where survivors of the apocalypse seem to have been predominantly psychopathic male bikers, having a loaded gun would seem to be very helpful for survival, and public health experts would probably advise people in that world to obtain guns.”

“However, for most contemporary Americans, the scientific studies suggest that the health risk of a gun in the home is greater than the benefit,” he adds.  “There are no credible studies that indicate otherwise.”

Let's have some real discussion about whether guns in the home are a good idea or not. Let's talk about whether using a gun for self defense actually is necessary or actually works. People are free to own guns if they want to. There are responsibilities that come with gun ownership and having a gun in the home should not be forced on anyone. Just like the tired argument about passing new laws leading to gun registration and confiscation, requiring citizens to own guns would violate people's rights to privacy and freedom not to own a gun. It goes both ways. This is a serious violation that just won't pass legal muster. Why do it then? That should be what this discussion is about. Until we have serious discussions, accompanied by serious research, these are the ridiculous and dangerous laws that fill the void of facts and evidence. But we have shut off the ability to adequately research this public health and safety issue because the NRA bought and paid for politicians have copped out to the gun lobby. It's time for that to stop in light of our national problem with mass shootings and every day shootings. Too many lives are lost every day. Enough is enough.
Posted by japete at 8:36 AM