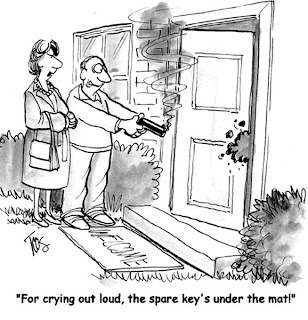 I have been thinking a lot about the difference between the two sides of the gun issue. Or maybe there are three or four sides for that matter. All I know is that there are people who read this blog who just hate what I say. They feel threatened by every word I write. They write ugly and offensive messages in comments that don't get published. They demean me on their own blogs and make a mockery of my words. They don't believe that reasonable gun laws and reasonable views about preventing the devastation in our communities caused by gun violence can co-exist with the second amendment. This divide is not necessary. But we have a culture in America where some folks, the minority as it turns out, worship guns. Guns have been become idols to them and any restrictions that would only affect other people who shouldn't have guns, sends these folks into a frenzy of fear, paranoia and hysteria. They seem to have ignored the actual problem in the country. That is that too many people are shot every day by bullets. Too many people have died. On that we have to agree. For if this carnage is just collateral damage to these folks, then the gun culture deserves a serious examination.

One can't open up a newspaper without reading about a shooting incident or commentary about the gun issue. The examination of the gun culture has begun. I ran across this article that espoused the views of many of us on the side of gun violence prevention. From the article:

When used in the way it is intended t be used, a gun – any gun, from the most powerful tank to the smallest derringer – damages something, puts a hole in something. Unlike other such devices (and only arrows come to mind as a truly “such” device) a gun attacks invisibly, in some cases (e.g. Hadiya Pendleton had no idea what was coming at her), and irretrievably in all cases – once you pull the trigger, it’s too late to even yell “Duck!”

Gun safety laws are, of course, vital in any civilized society. Ever improving treatment of mental illness is likewise vital.

But perhaps more vital is that we scrub our culture of the notion that guns are a good thing, that they’re cool, that they’re a mark of being American.

That can happen. It can’t happen easily, without great effort and encountering a lot of pushback from powerful people. But it can happen, for we have outgrown a lot of things in our culture we once thought cool or glamorous. (Take a peek at a few of these ads, for instance.)

Smoking is perhaps the best example. Smoking was glamorous: it wasn’t just advertising that made us buy cigarettes – they were a lifestyle, something, you know, Bogey did. Consequences? Eh.

There was a time being drunk was funny – Frank Fontaine, Foster Brooks, Dean Martin. Hilarious. Believe it or not, the concept “designated driver” was not born concurrent with the invention of the automobile: it wasn’t until the 1980s that driving drunk was considered more than merely “risky”, that it was a menace that begged a societal effort to fix.

There are laws now about smoking and drinking that weren’t on the books when Bogie leered through a cloud of smoke, when Dean Martin stumbled into a piano and slurred the words of a song: e.g., you can’t smoke on planes or certain buildings; you can sue a bar owner for enabling drunk driving.

Americans change our paradigms. We discard our crutches. We are wise that way, and adaptable. We can change our culture, if we truly want to. Those laws helped, but they aren’t what changed our minds. We changed our minds. There were efforts to educate us, to point out the consequences; and, since we’re reasonable, we bought into the programs.

We need to promulgate the attitude that owning, or using, a gun is nothing to be proud of -- that it is, at best, sometimes a distasteful last alternative, that use of a gun is something to be sad about.


The most ardent advocate for gun rights, the National Rifle Association, casts the link between guns and suicide as something of a virtue. “Gun owners are notably self-reliant and exhibit a willingness to take definitive action when they believe it to be in their own self-interest,” the NRA wrote in a fact sheet, called “Suicide and Firearms,” on the Web site for the group’s lobbying arm. “Such action may include ending their own life when the time is deemed appropriate.”

Sigh. Is it ever"appropriate" for a teen-ager to take his/her own life with a gun? The NRA lobbyists and leaders don't think much about whether the culture of guns contributes to the high rate of gun suicides in America. Here are some observations by parents of a gun suicide victim and then some facts ( from the article):

Shannon knew how to handle the gun. Her parents had taught her and her sisters to fire weapons. They had gone to shooting ranges. “The mind-set out here is that we use guns for hunting, for target shooting, to keep the family safe,” said Massolo. “If you want to keep the family safe and you have mental illness in the family, then lock your guns up for a while or give them away for a while. We’re not saying give them away forever. We don’t want to take the gun away.”

The gun Shannon used to kill herself had been in the family for years. It was a gift to her father from his father-in-law, a former Reno police officer. Shannon had used it for target practice many times.

“That’s something we’ve dealt with,” Massolo said in a recent interview. “We taught her how to kill herself. But we were trying to teach her how to be safe. It’s a different mind-set out here about guns. I know the East Coast doesn’t think that way.” (...)

Contrasting life experiences, whether from a family member’s suicide or the death of a relative in a homicide, drive the nation’s split over an essential element of the gun debate: Would fewer guns save lives? Survivors of homicide victims consistently tell pollsters that the answer is yes, but the response to suicide is different.

“We have less empathy with those who take their own lives,” said Sean Joe, an expert on suicide and violence at the University of Michigan. “So we don’t have the same national outcry. The key argument for me is that increased access to firearms increases suicide and homicide.”

Guns make a difference. Guns are part of our culture. That will not change. But our attitudes towards guns and keeping us safe from gun violence in our homes and communities can change. Passing laws matters. It has mattered in most other democratized countries in the world where gun violence is just not part of their culture. It doesn't have to be this way. If we didn't have this culture, men who are angry with their spouses or partners wouldn't decide to use the ultimate threat to gain power and control over women. If we didn't have this culture, perhaps the 20 children massacred on 12/14 would be alive today, going to school and playing happily with friends.  Perhaps the 6 fathers who were shot at the Accent Signage Company would be around to hug their children good night, or the Sikh Temple families would still have their loved ones with them at their place of worship. Or perhaps 32 people at Virginia Tech would not be among the statistics of the nation's worst school shooting by number killed. Perhaps Representative Gabby Giffords would be serving in Congress today, doing the job she was elected to do. Most assuredly Trayvon Martin would be alive.

And if you don't think something needs to change, please read this article about a church that encouraged children to make "pop tarts" in the shape of guns to make a point about second amendment rights. Check out, from the article, why our gun culture is nuts:


This past Sunday, a Chicago area church sponsored a Second Amendment Sunday filled with “assault” pop-tarts, “combat” cupcakes and a sheet-cake that featured a chocolate semi-automatic Glock handgun with a quote from Jesus that read “Blessed are the peacemakers.” John Kirkwood, Pastor of Grace-Gospel Fellowship in Bensenville Illinois said the idea came to him after reading a column by Doug Giles entitled “Christian Parents Should Have Their Kids Play With Toy Guns.” (...) “Second runner up received a double barrel shot-gun that we nicknamed ‘The Biden,’ and when we presented it we made sure to say what ‘not’ to do with it in a real situation.  The prize for runner up was a Navy Seal sniper rifle that we named ‘The Chris Kyle’ in honor of the American Sniper.  We felt that it was appropriate,” added Kirkwood, “given the insulting way that this administration ignored the death of this American hero, yet had the crust to send a delegation to the memorial service for Hugo Chavez.”

Peacemakers? This is a part of a culture that literally worships guns in a church and exposes kids to the culture. This sort of behavior is not acceptable in a country where 20 little children were massacred in their school classrooms. It may take years for a change to happen but the Sandy Hook school massacre has managed to focus national attention on this gun culture. Along the way, people are learning about things they didn't know before. Along the way, people's opinions have changed and they are expecting their elected leaders to do something to prevent senseless and preventable shootings. And you will notice that these people are not saying they want to take away rights nor are they saying guns should be confiscated. They are asking for common sense. That's all. Common sense can co-exist with the second amendment. It can't co-exist with extremism. It can co-exist with reasonable people who exercise their rights to hunt and own guns for self defense and recreation. It can't co-exist with people who believe that their guns and rights will be taken from them if any reasonable gun law passes. Enough is enough. It's time for a change in the laws and it's time for a change in the culture. What we are doing now is just not working.

Today is national day of action. Please contact your U.S. Senators and tell them to vote in favor of the reasonable gun laws before them. Lives depend on it.
Posted by japete at 7:09 AM