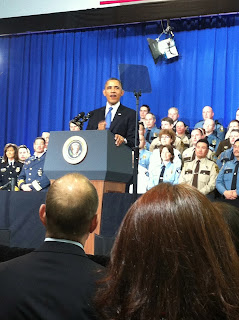 Today I had the honor of being an invited guest to President Obama's press event in Minneapolis. This was his first event outside of Washington D.C. to bring his message about the need for common sense gun measures that will save lives. The room was full of law enforcement officers most of whom agree with the President's proposals. I spoke to a few of them who were tired of the NRA extremist rhetoric and want something to get done soon. They are outgunned on our streets. They see the bodies of gunshot victims and have to be with the families after shootings. The confluence of victims, law enforcement officers, elected officials, community activists, clergy, ATF agents, domestic abuse activists, mental health officials, corporate organizations involved in anti-violence efforts, etc. is just what is needed to get the job done. Here is a good article about the event today:

""We don't have to agree on everything to agree it is time to do something," Obama said in his 15-minute speech at the Minneapolis Police Department's Special Operations Center. "Each of us has a role to play."

The stage for the president's speech, at 4115 Dupont Av. N., is four blocks south of where 5-year-old Nizzel George was fatally shot last summer in his home in a gang dispute. Last year, police averaged one gun seized a day in the North Side's Fourth Precinct.

If the nation is serious about preventing the kind of violence, "law enforcement and other community leaders must have a seat at the table," Obama said. Law enforcement "is on the front lines of this. They know what works, what doesn't work, and how to get things done," he said.

"We might not be able to prevent every massacre or random killing," the president said. "If there is just one thing we can do, one life we can save, then we have an obligation to try.""

We have an obligation to try and try we will. We will do more than try. We will succeed. Why? Because the public is coming to a lot of consensus about doing something about the carnage. The public is tired of the shootings. The public is tired of our leaders standing with the NRA lobbyists instead of the public and the victims of gun violence. The public is tired of the devastation in their communities from shootings. The public knows that we are better than this as a country and wants a plan to deal with the epidemic of gun violence. And since the NRA leaders and lobbyists don't speak for the public or even their own members, it is time for them to either agree that doing nothing is not an option any more or sit down and be quiet. It's time for them to join with the 90% of Americans to get something done. Lives are at stake. As the President said today, there is not time to wait. Will we wait until after the next 12/14? Or will we get to work and save lives?

Starting tomorrow in Minnesota, we have a chance to strengthen our gun laws. There will be hearings for the next three days at the legislature about bills to require background checks on all gun sales, to limit ammunition magazine size, to restrict assault weapons, to fix some problems with our current laws that have allowed too easy access to guns to people like the shooter at Accent Signage Company in Minneapolis last September. He was able to get a gun and a permit for a gun even though he had led police on a high speed chase some years before the shooting. He also had mental illness. And he had easy access to guns. Lives were lost. We need to fix our gun laws. The family of the Accent Signage CEO met with President Obama today. I met them all after the event. Their courage in standing up to demand stronger gun laws while still in mourning for their father and husband is to be admired. From this linked article written by Sami Rahamim:

While it will be an honor to meet President Obama today, I will never forget the tragic circumstances that have led me to this moment. My father was a living, breathing example of the full potential of the American Dream, but instead he is now the face of a broken system that allows dangerous weapons into the wrong hands.

I am calling on Congress to follow the White House’s lead by taking the necessary action to reduce the plague of gun violence that has affected so many families like my own. I also urge Americans across the country to contact members of Congress and ask them to support the passage of this critical legislation.

We have shed enough blood. We have lost enough family, friends, neighbors, and fellow Americans. We have seen enough carnage.

If only our leaders would have this much courage. The public will see soon enough which politicians care more about their A rating from the NRA than about their conscience and doing the right thing. Listen to 17 year old Sami whose wisdom is well beyond his years. He is wiser than some of our leaders.
Posted by japete at 9:18 PM