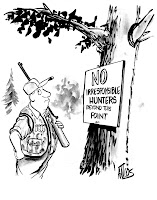 I ran across this thoughtful and articulate article written by a North Carolina gun owner who wants nothing to do with the NRA. He explains how he started hunting and became a gun owner and comes to the conclusion that the NRA does not represent him any more in the current discussion about gun policy post 12/14.

"All too predictably, the National Rifle Association tried to groom me: I started getting their recruitment and fundraising letters, and I received ridiculous robo-calls telling me about purported plots of the United Nations to take our guns away. But credit the savvy of the NRA's direct marketers: The mailings and phone calls ended quickly. They must have figured out that I'm not one of their suckers.

The NRA wasn't always this way. As various news outlets have reported recently, for a century the NRA was a respectable, noncontroversial organization focused on promoting safe shooting and the conservation of public game lands. That NRA supported the National Firearms Act of 1934, passed in response to gangster violence, as well as the Gun Control Act of 1968. However, in 1977, as cheap Saturday night specials flooded America's cities, the right-wing nuts took over the NRA. And America's ability to craft sensible gun laws ground to a halt.

I don't want anything to do with the NRA, but it won't leave me alone. Thanks to the NRA's appalling and evil power in Washington, I am besmirched and complicit. It's the first or second question people ask me: "You're not a member of the NRA, are you?" It's like the old days when traveling North Carolinians constantly had to answer for Jesse Helms.

And it gets worse for the left-wing North Carolina gun owner. A North Carolina-based holding company called The Freedom Group has bought up legacy gun manufacturers, including Bushmaster and Remington. The Freedom Group is headquartered in Madison, N.C., north of Greensboro, and it is owned by a Wall Street venture firm, Cerberus Capital Management. Furthermore, George K. Kollitides, CEO of The Freedom Group, is on the NRA's nine-member nominating committee. (After Sandy Hook, however, Cerberus announced its intention to divest its holdings in The Freedom Group. And I may need to divest myself of my Remingtons.)

I like to think that as a nontraditional gun owner, I can help build bridges and encourage sensible gun discussion. But the NRA doesn't want this to happen, and I am often discouraged by the silence of moderate gun owners. Our silence leaves a vacuum to be filled by aggrieved non-gun owners and the shrill, irrational, often frightening gun zealots. But this isn't an accurate picture of reality: No less an authority than Republican pollster Frank Luntz has determined that a majority of gun owners, including some NRA members, would prefer to see tightened rules. But speaking up means exposing oneself to angry denunciations from the gun fundamentalists."

And, further, the writer implores reasonable gun owners to speak up. He's right. If you aren't part of the solution, you are more than likely part of the problem. More from the linked article above:


Normal, sane gun owners need to speak up. We need to disassociate ourselves from the nasty, delusional fools along with the sinister, secretive, evil NRA that purports to speak for all of us.

I write these words as Barack Obama is inaugurated for his second term. My enthusiasm for Obama has always been muted. I'm someone who wishes he had been tougher on the banks. I want more socialism in Obamacare. I suspect his drone strikes have killed more children than Adam Lanza did in Newtown. But the gun issue is making me a fan. It takes courage to face down our gun culture, to see your name on hateful placards brandished by gun extremists around the country.

So, gun owners, law-abiding patriotic Americans that we are, we need to get our heads out of the sand and meet non-gun owners on common ground. Meet our besieged law enforcement officers who want tighter regulation. Meet the grieving parents.

If we don't, we may not be invited to the discussion when policymakers' hands are forced by the next massacre of unarmed children.

Thank you to yet another reasonable gun owner. This one was particularly powerful and heart felt. They are speaking out every day in increasing numbers as the NRA lobbyists and leaders dig in their heels deeper and harder in the face of growing public support for common sense. It's time to stop this extremism and absolutism. It's not working. The ugly, threatening and insurrectionist remarks are not only not resonating but they are calling attention to the craziness of the extremist positions held by a few noisy gun rights extremists. In the face of this, it's hard to speak out but people are doing so anyway. I like their courage.

North Dakota is known as a "red state" and pretty conservative. Gun rights are big in North Dakota. Or are they? Only 70 advocates for gun rights showed up on gun appreciation day to rally in favor of refusing any gun violence prevention measures. Those present uttered the typical paranoia and hyperbole. This brave North Dakota gun owner did not join those extremists but instead, wrote the letter below:

By and large, these measures seem eminently reasonable — but not to the gun lobby. The National Rifle Association, gun manufacturers, Rush Limbaugh and many gun owners complain, “The government wants to take all of our guns away,” and “Protect the Second Amendment.”

Of course, this crowd seriously believes that the solution should be teachers toting guns in the classroom, armed guards in every school or armed volunteers patrolling the school perimeter.

Let’s level the playing field, the members of this group say, so that when a bad person with a gun invades a school or home, there will be lots of good people armed and ready to take that person out.

What madness. Just wait until the first innocent people are mistakenly gunned down by such civic-minded vigilantes. Or, when the local police show up on the scene and, among all the trigger-happy residents, don’t have a clue who the real psychopath is.

And just get over the wrap-thyself-in-the-flag mantra about the Second Amendment. It was written because our founding fathers feared the establishment of a standing army.

Today, of course, it seems like the amendment should read, “To ensure my productive hunting season, to protect my Private Property, to let me add as many firearms to my collection as possible and to retain my ability to oppose the democratically-elected government of my country with armed force, my right to keep and bear Arms, shall not be infringed.”

And they think Obama is over-reacting.

Any bets that the writer of this letter is getting ugly, offensive and maybe even threatening e-mails, comments and calls after writing this? For that is the intolerance people like him face from the gun rights extremists who refuse compromise and refuse to acknowledge our national public health and safety epidemic. I love the satire here because it gets the point across so well.

Sadly and unfortunately, some "law abiding gun owners" who have been buying assault weapons off the shelves at gun stores all over the country are not too interested in being responsible with them. This Minnesota man used his in an argument with his daughter over her school grades. From the article:

Kirill Bartashevitch was charged with two felony counts of terroristic threats in connection with the Jan. 13 incident.

According to the complaint, St. Paul Police responded to St. Paul Central High School on Jan. 17 after a report of an assault against a 15-year-old female student. A social worker at the school had received a report from a parent who had been monitoring her son’s electronic communications. The communications showed that Bartashevitch had sent the son a message that he had pointed an AK-47 rifle at the girl.

The complaint states that the girl and Bartashevitch were arguing at their residence on Jan. 13 about her grades in school. She was getting two Bs in school instead of two As. He swore at the girl, who then told him she hated him, and he grabbed a recently purchased AK-47 and pointed it at her.

According to the complaint, he bought the rifle because he knew it would soon be banned. The girl’s mother jumped between them when he pointed the gun, and the girl was eventually ordered to go to her room by Bartashevitch.

The girl’s mother told police that when she intervened, Bartasevitch threw her to the floor and that he pointed the gun at both of them, the complaint states.

On Jan. 24, police conducted a search warrant of his home and found 9mm ammunition and receipts for the purchases of two rifles.

This man is obviously not one of the reasonable gun owners who want to see change in our gun laws. He represents the fear and paranoia of the minority. He is also a liability to the cause of the gun rights extremists who deny that things like this will happen with legal assault rifles. Is this man's assault rifle going to be used in self defense or for hunting? Apparently not. But many more reasonable gun owners are speaking out. You can read other examples in my previous posts. I am going to end, for this post, with writings by well-known novelist and gun owner Stephen King who has published this response on Kindle for download.  An excerpt from his essay:

Determined and at times profane, the 8,000-word essay confronts NRA members straight on: “In the wake of the Sandy Hook shootings,” King writes, “gun advocates have to ask themselves if their zeal to protect even the outer limits of gun ownership have anything to do with preserving the Second Amendment as a whole, or if it’s just a stubborn desire to hold onto what they have, and to hell with the collateral damage.”

“I have nothing against gun owners, sport shooters, or hunters,” King writes, but “how many have to die before we will give up these dangerous toys? Do the murders have to be in the mall where you shop? In your own neighborhood? In your own family?” (...)

He concludes with what he calls “a trio of reasonable measures to curb gun violence”:

2. Ban the sale of clips and magazines containing more than ten rounds.

3. Ban the sale of assault weapons such as the Bushmaster and the AR-15.

As one of the most popular authors in the world, King is immediately a powerful new presence in the gun control debate. But he repeatedly emphasizes the need for all sides to work together. Acknowledging the political difficulty of getting new restrictions passed, he notes that meaningful change will only happen “if gun advocates get behind it.”

Thank you Stephen King for writing this essay. It is full of common sense and reflects the views of the majority of reasonable gun owners and all Americans who have had enough of the pandering to the NRA lobbyists and gun industry while the families of the shooting victims mourn for their loved ones and communities live with the devastation caused by gun violence. We are better than this and the above gun owners understand that very well. It's time to work together to save lives. Let's get to work.
Posted by japete at 7:14 AM