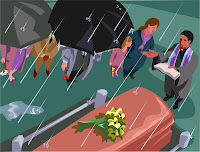 There is something so emotional about saying the name of a deceased loved one out loud. After my Dad died, I attended a service at the hospital where he died to remember those lost in the last year. We were encouraged to say the name out loud of our loved one. It was very hard. After my mother died, I attended two memorial services. One was at the funeral home who prepared her for burial. We said her name. It was emotional. Then we went to a service at the Assisted Living facility where my mother lived in her later years and died. Again, we said her name. It was emotional. Let us say the names of some of the women who have been shot to death in domestic disputes. This article encourages us to remember the victims. There is so much here to absorb and highlight. Let's start with this:

While disheartening and indefensible, I get the turn towardsconcussions, guns, and the masculinity of sporting cultures.  The murder-suicide shines a spotlight on a number of issues that many have been grappling with for many years.  It encapsulates people’s discomfort about a culture that condones on-the-field violence that may contribute to so much pain off-the-field.  It highlights society’s moral failures whereupon profits are put in front of people.  There will be a time for these conversations, but for now the spotlight needs to be on Kasandra Michelle Perkins.
Upon hearing about this tragic murder of Kasandra Michelle Perkins, I too turn my attention to these issues; I am guilty of this failure, having tweeted about concussions, suicide, and the culture of the NFL. These issues are real, but so is the tragic death of Kasandra Michelle Perkins.
Kasandra Michelle Perkins cannot be a footnote.  She cannot be an afterthought.

(...) Her murder is a startling and sobering reminder about the all-too common tragedy of domestic/intimate partner murders.  “Each year thousands of black women are shot, stabbed, stalked, and brutalized in crimes that never make it on the national radar.  Black women experience intimate partner violence at a rate of 35% higher than do white women,” writes Sikivu Hutchinson.  “Intimate partner violence is a leading cause of death for black women, yet they are seldom viewed as proper victims and are rarely cast as total innocents.”

The failure to value all lives equally, to scream to demand justice embodies American racism and sexism.

And more from the article:


The media erasure, particularly of the lost lives of women of color, is a root problem.  It points to a systemic failure.  The consequences are grave and mortifying.  The ubiquity here is haunting; the devastation is disheartening; and our collective silence, paralysis, and acceptance are shameful.

So say some names. Speak out in their names. Guns in the home make the lives of these women more risky. Guns carried by some law abiding citizens make it easy to walk into a beauty salon or a church and kill someone you used to love. Kay Sisto. Kasandra Perkins. Rita Sawyer. Zina Haughton. April Oles. Noelia Gonzalez-Brito. Gladys Cabrera. Barbara Lund. Marcia Santiago. Carolyn Seitz Vorhees. Of course, there are hundreds and thousands more whose names are etched into the heads of those who loved and knew them. There isn't enough space here for me to name them all. Darlene Sitler was among the latest of those women killed in a domestic dispute by a man wielding a gun. It's not clear yet why Eldred ( the ex husband shooter) decided to walk into a Sunday morning church service and shoot his ex-wife who was playing the organ. From the article:

Pastor Evon Lloyd told police that Eldred entered the church wearing a hooded, beige jacket and "leveled a gun at the victim and shot," according to the criminal complaint. The woman then fell into the organ pit. Eldred quickly left the building and put a handgun on the hood of his vehicle while those inside called 911 and aided Sitler.

Another witness, Leslie Rolfe, said Eldred picked up the gun about five minutes later, while Rolfe tried to hold the church doors shut but couldn't. Rolfe and his wife, Dr. Beverly Prince, tried to persuade Eldred to drop his gun, but he instead threatened to shoot them and the pastor, telling Prince "I want to finish this," the complaint said.

Eldred then walked toward his ex-wife saying, "I got to see her. I got to see if she's dead," before firing two more shots at Sitler, the complaint said.

Police said nobody else was hurt, though Eldred's gun went off once when Rolfe and other members of the congregation struggled to subdue Eldred and take his gun.

No one mentioned that Eldred had a criminal record. I think we can assume he was a "law abiding" citizen with a gun he decided to use in a crime of passion, anger, depression or for whatever reason people get a notion in their heads that a gun will solve some sort of problem. There are too many victims of this kind of shootings. The papers are littered with the stories of them. Say their names. It makes a difference. They were real live people who in an instant were suddenly silenced. That is why we should focus on women like Kasandra Perkins, killed by a suicidal man with a gun who then shot himself. Many of the incidents that lead to the murder of women in domestic disputes also end with the suicide of the shooter. When a gun is available, moments of anger or depression can turn quickly into funerals. Where is common sense?

Here is one of many more good articles about domestic violence written by someone who tried to kill his girlfriend and himself:

What binds together all male perpetrators of murder-suicide—there are a handful of very rare cases, such as the murder of Phil Hartman, where women kill their lovers and then themselves—is the grandiose sense that another person’s life is ours to take. Belcher may have been motivated by rage and pain and traumatic brain injury, while I was driven by a bizarre sense that I was carrying out a merciful act, but in the end our assumptions were the same: We got to make the call about who lived and who died. This is what makes murder-suicide an inherently misogynist act: It’s based on a man’s assumption that a woman’s body belongs to him. That’s as true when it’s motivated by a perverse chivalry as when it’s driven by hate.

Men who attempt murder-suicide are, like all domestic abusers, in great pain themselves. Killing themselves at the same time or shortly after they’ve taken the lives of their partners is often about expiating guilt and diverting the rage of survivors. We live in a culture where we’re trained to be sympathetic to the depressed and the self-destructive; committing suicide (especially in the very public way Belcher did) is a way of demanding sympathy and understanding. Alas; that strategy too often works. (...)

My ex and I are alive, thanks more to my intoxicated ineptitude and the absence of a firearm than anything else. Kasandra Perkins and Jovan Belcher are dead. And though it’s worth discussing how drug addiction, brain injuries, and the easy availability of guns played a part in this tragedy, we also need to remember that we live in a society that encourages men to displace their own rage and hurt onto the women they love. Whatever the surface motive—sexual jealousy, fear of abandonment, the terror of dying alone—murder-suicides are almost always about men’s belief that they have the right to make the most irrevocable decision of all for women whose chief crime is poor taste in men.

I can hardly keep up with the number of articles that have been written about the domestic violence case of the Kasandra Perkins shooting. These are shedding much needed light on the issue of domestic shootings and domestic violence in general. Here is a particularly good one from the Family Justice Center Alliance:

She died at the hands of man who was likely verbally and emotionally abusive to her. We know he was suicidal now. We know he was homicidal. We know he had access to firearms. We know he was jealous and possessive. Police and friends have already reported a history of arguments and disputes between them before the murder. His rage toward her motivated what he did to her. The killing was the ultimate act of power and control. It was not about head trauma and hopelessness.

Relationships do not go from healthy, happy, and functional to murder-suicide overnight. It never happens. There is almost always a history and there is always a pattern. Over time it will be clear that friends, family, and colleagues knew things and saw things and did not take action. The escalating conflict did not get addressed with the help of outside professionals. And the result? Jovan Belcher consciously chose to kill the mother of his daughter after years of little or no accountability for his rage and abuse. Only then, after becoming a domestic violence murderer, did he choose hopelessness and take his own life.

Here is another article about victims of domestic violence from Care2. From the article:

For the right, there is never an “appropriate” time to talk about gun violence or domestic violence, a reality the National Football League must be counting on given that this year alone of the 32 teams in the NFL, 21 have had at least one player who’s been charged with either domestic violence or sexual assault.

Like the NFL, the National Rifle Association has its own agenda its pushing at the expense of women’s lives. “Up until the moment Javon Belcher executed Kasandra Perkins in front of her mother with a handgun, he was precisely the type of ‘law-abiding gun owner’ that the National Rifle Association loves to portray as infallible.” said Ladd Everitt, Director of Communications for the Coalition to Stop Gun Violence. “Had anyone questioned Belcher’s mental state – about which we will certainly learn more in the days to come – the NRA would have been the first to tell us that Belcher’s guns were none of our business and certain to make both him and those around him safer.”

The reality is gun culture depends on, and is built upon, open misogyny. It’s what fueled the immediate victim-blaming of Perkins, the eulogizing of Belcher, and the reason the single-greatest threat young African-American women face is death at the hands of a partner.

Was Perkins’ death preventable? Absolutely. Will this country get serious about preventing another senseless homicide thanks to easy access to guns? That’s a much more difficult question. “Americans frequently struggle with mental health issues and when they do, firearms are readily available” said Everitt. “Only an involuntarily commitment or adjudication by a court as a ‘mental defective’ prohibits one from buying a gun based on mental health background. What percentage of severely mentally ill Americans fall into either of these two narrow categories?”

Clearly not Belcher, which is exactly how the NRA and other domestic violence apologists intend it to be