And now, firefighters are not safe from gunmen 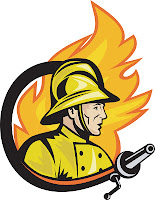 I wasn't going to write on my blog until after Christmas, assuming there would be the usual number of shootings during the holiday. But there is a story that needs to be written on this Christmas Eve day. That would be the story of 2 firefighters in Rochester, New York who were gunned down by a crazed gunman with an assault rifle. From this article:

"Two brave volunteer firefighters were shot dead today and two injured when a lone gunman started a blaze as a trap to lure the men and opened fire on Christmas Eve.

In addition a single police officer from the West Webster police force in New York was hit by shrapnel during the shooting which comes just ten days after the Sandy Hook Elementary School massacre rocked the nation.

The firefighters were called out to the fire on the shores of Lake Ontario at around 5.35 a.m. and the shooter immediately opened fire and initial reports claimed he was using an assault rifle - before a police SWAT team arrived and soon after the gunman died from a gunshot wound. It is unclear if it was self-inflicted."

The firefighters were lured to the scene by a felon with an assault rifle. He served 17 years after killing his own grandmother. And today, on Christmas Eve day, he set fire to a house and a car and lured firefighters to the scene so he could shoot them. Have we now had enough? This is just almost more than our country can bear after the recent epidemic of mass shootings. Why and how did this guy get his gun? More will be released later about that, I'm sure. For now, more families are grieving the sudden, violent and senseless deaths of a loved one. The title of the article above is "Christmas Eve gun horror." Indeed. Horror.

I guess this will be our way of life going forward if our leaders choose to ignore our American public health and safety problem crying out for a solution. Some will resist common sense measures to prevent future shootings. They will be on the wrong side of public opinion. The public does not understand the need for assault type weapons in our communities. From a poll in the linked article:

Even NRA members and conservatives are speaking out about restricting these type of military style weapons. This editorial piece, written by the conservative judge who sentenced Jared Loughner made his case for getting rid of these guns:

So what's the alternative? Bring back the assault weapons ban, and bring it back with some teeth this time. Ban the manufacture, importation, sale, transfer and possession of both assault weapons and high-capacity magazines. Don't let people who already have them keep them. Don't let ones that have already been manufactured stay on the market. I don't care whether it's called gun control or a gun ban. I'm for it.

Very reasonable. The public agrees with him. But some just can't give up their association with the extremists of the NRA lobbyists and their leaders who promote the sale, purchase and use of assault weapons. And some other insensitive folks have chosen to turn a deaf ear to the carnage and promote guns even days after the massacre of 20 small school children. Check out this gun group in Utah giving away guns this Christmas:

Here's a Christmas gift that won't be coming in Santa's sleigh — a 9 mm handgun that a Utah gun group plans to giveaway to celebrate the success of its new online firearms classified page.

The Utah Gun Exchange was created by Nick Moyes and three of his friends earlier this month to fill the void left when KSL-TV temporarily suspended firearms listings on its popular classifieds website after the Connecticut school shooting.

KSL officials said they felt it was appropriate to halt gun ads during a time of national mourning.

Moyes' site already has 600 firearms listings, and hopes it becomes a place for responsible, polite Utah gun owners to unite.

The Utah Gun Exchange group will be picking "one lucky winner" among some 7,000 people who have "liked" their Facebook page and are 21 years or older. The winner must pass the requisite government background check.

The winner will receive a Sig P2022 9 mm handgun with a mounted laser. There is no significance to the gun, other than the fact that it was inexpensive and cool, Moyes said.

Moyes says the gun is used by French police, and was the one pulled out of a safe by fictional character Jason Bourne in the "Bourne Identity" movie.

The gun giveaway is callous and offensive, said Abby Spangler, founder of Alexandria, Va.-based Protest Easy Guns. The national group advocates for a law that would require background checks on all weapons sold in the United States, including in private sales.

Seriously folks, it is beginning to look a lot like chaos. Yet another police officer was shot to death in Houston this morning around the same time as the firefighters in New York were shot in an ambush. When people carry loaded guns around with them, an ordinary altercation can turn deadly in an instant as it did in this case:

A Houston traffic stop ended with a gunman shooting and killing a police officer and a bystander on Christmas Eve in the parking lot of a body shop, police said.

The incident that began shortly before 9 a.m. Monday quickly evolved from a routine traffic stop into a violent confrontation when the suspect sped off in his black car rather than pull over as the police officer had requested, Houston police spokesman John Cannon said. As the suspect fled, he sideswiped a white truck, which also took off after him, he said.

The suspect and the white truck eventually pulled into a nearby Maaco body shop, and that is when the officer with the Bellaire Police Department approached the vehicle, Cannon added. Apparently, he said, an argument of sorts erupted, and the suspect pulled out a .380 caliber handgun and shot the officer.

"The saddest thing is that the officer, who is deceased, didn't have the opportunity to pull his weapon and defend himself," Cannon said. "It happened that fast."

A man then walked out of the body shop, and the suspect fired at him, Cannon said.

Other officers arrived at the scene and a gunfight erupted between the police and the suspect. The suspect was shot and fled on foot, Cannon said. He hid under a parked truck but officers followed a trail of blood and arrested him.

Good grief. Senseless. This bears repeating: " The saddest thing is that the officer, who is deceased, didn't have the opportunity to pull his weapon and defend himself"..."It happened that fast." Remember now that Wayne LaPierre and the NRA minions he claims to represent, are very sure that this would never happen to them. If they have a gun on them, they would be able to defend themselves and school children from shooters who take them by surprise, much like this incident happened. They are wrong, of course. But they continue to spew their lies and have managed to convince some unwitting and naive folks that they are right. And how could the bystander possibly have defended himself from this totally surprise attack as he was walking out of a body shop? What would possess someone to just randomly shoot someone- anyone-as they walk by? Is this a game to some people? Sort of like shooting at moving ducks ( or is it sitting ducks?) at a fair tent? The problem is that real guns have real bullets that kill real people in cold blood. Enough.

There's a bit more information about the shooting of and deaths of 2 firefighters and injury of 2 more in Rochester, New York yesterday. From this article:


Emergency radio communications capture someone saying he "could see the muzzle flash coming at me" as Spengler carried out his ambush. The audio posted on the website RadioReference.com has someone reporting "firefighters are down" and saying "got to be rifle or shotgun — high powered ... semi or fully auto."

And, about the senseless shooting from the community:

The shooting and fires were in a neighborhood of seasonal and year-round homes set close together across the road from the lakeshore. The area is popular with recreational boaters but is normally quiet this time of year.

"We have very few calls for service in that location," Pickering said. "Webster is a tremendous community. We are a safe community, and to have a tragedy befall us like this is just horrendous."

O'Flynn lamented the violence, which comes on the heels of other shootings including the massacre of 20 students and six adults at Sandy Hook Elementary School in Newtown, Conn.

Gun violence does and will affect any community in America. It happens in urban areas with regularity and it also happens in small sleepy towns or in suburban America. Yes, even in rural America. It is pervasive and has a ripple effect across our country.

It needs to be added that law enforcement now knows where the shooter of the firefighters got his guns. He was a felon who couldn't legally buy a gun. Now a 24 year old woman has been arrested for "straw purchasing" the guns for the shooter:

U.S. Attorney William Hochul Jr. said at a 4 p.m. ET press conference that Nguyen bought the guns on June 6, 2010, from a Gander Mountain store in Henrietta, south of Rochester. He said William Spengler Jr., a former neighbor in Webster who ignited an inferno and ambushed first responders before dawn Monday, picked out the guns and Nguyen bought them.

As as a convicted felon, Spengler was banned from owning guns. He served 17 years in state prison for killing his grandmother with a hammer in 1980. Nguyen lived next door to Spengler for about five years, in the house where he killed his grandmother.

"It is sometimes referred to acting as a 'straw purchaser' and that is exactly what today's complaint alleges," Hochul said.

Hochul indicated that in his rambling suicide note, Spengler revealed how he got the guns.

Police interviewed Nguyen late on Christmas Eve and she told officers she had bought the guns for personal protection and that they were stolen from her vehicle, but she never reported them stolen.

On Christmas, Nguyen texted an off-duty Monroe County Sheriff's deputy and referenced the killings, the Associated Press says. Later, police said, she called the deputy and admitted she bought the guns for Spengler.

Nguyen's lawyer, Dave Palmiere, said Friday that his client "purchased the weapons legally, and they were stolen," but that she doesn't recall whether she reported the theft to police.

Several neighbors described Nguyen's home in Greece, west of Rochester, as quiet, but said there was constant traffic in and out. There were five or six cars parked in the driveway Friday afternoon.

This is why a crack-down on straw purchasing is important and why gun dealers need to be monitored more closely and held responsible if they knowingly sell to someone when they know it is a straw purchase. It is also why a mandatory reporting of lost and stolen guns is important. If a gun is actually stolen, it aids law enforcement in solving crimes. But if a gun is found at a crime scene and someone claims it was stolen but wasn't, it adds to the problem of illegal guns in our communities. Gun laws matter.