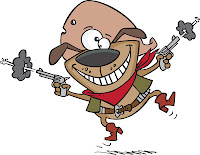 A new study points to the obvious. More guns have not made us safer. But we live in the NRA's fantasy world that says more guns equal less crime and will make us safer. It's just not true. Let's take a look at this Mother Jones article that has researched the issue of more guns and more mass shootings.

"In the fierce debate that always follows the latest mass shooting, it's an argument you hear frequently from gun rights promoters: If only more people were armed, there would be a better chance of stopping these terrible events. This has plausibility problems—what are the odds that, say, a moviegoer with a pack of Twizzlers in one pocket and a Glock in the other would be mentally prepared, properly positioned, and skilled enough to take out a body-armored assailant in a smoke- and panic-filled theater? But whether you believe that would happen is ultimately a matter of theory and speculation. Instead, let's look at some facts gathered in a two-month investigation by Mother Jones.

In the wake of the slaughters this summer at a Colorado movie theater and a Sikh temple in Wisconsin, we set out to track mass shootings in the United States over the last 30 years. We identified and analyzed 61 of them, and one striking pattern in the data is this: In not a single case was the killing stopped by a civilian using a gun. Moreover, we found that the rate of mass shootings has increased in recent years—at a time when America has been flooded with millions of additional firearms and a barrage of new laws has made it easier than ever to carry them in public. And in recent rampages in which armed civilians attempted to intervene, they not only failed to stop the shooter but also were gravely wounded or killed."

And further, from this article:


There is no evidence indicating that arming Americans further will help prevent mass shootings or reduce the carnage, says Dr. Stephen Hargarten, a leading expert on emergency medicine and gun violence at the Medical College of Wisconsin. To the contrary, there appears to be a relationship between the proliferation of firearms and a rise in mass shootings: By our count, there have been two per year on average since 1982. Yet 24 of the 61 cases we examined have occurred since 2006. This year alone there have already been six mass shootings—and a record number of casualties, with 110 people injured and killed.

Armed civilians attempting to intervene are actually more likely to increase the bloodshed, says Hargarten, "given that civilian shooters are less likely to hit their targets than police in these circumstances." A chaotic scene in August at the Empire State Building put this starkly into perspective when New York City police officers confronting a gunman wounded nine innocent bystanders.

I suggest that you take a close look at this article. There is a map and timeline of mass shootings in America as well as the types of guns used by mass shooters and where they get them. It highlights, once again, that these shootings are an American tragedy. It is not a pretty picture.

Since this article was written, of course, my home state of Minnesota has suffered its' worst and first workplace mass shooting. I wrote about it in a previous post. It's interesting that the national media focused on the shooting for a day or two and moved on. Thus is the nature of mass shootings or any shootings in America. They have become so commonplace that we talk about them for a while and then move on. The victims' families and friends don't move on, however. They are now part of a club of which no one wants to be a member. I am part of that club. It's not exclusive. It includes families from all walks of life. It's a life time membership. There are no regular meetings or membership dues, except for the everlasting grief and pain that results from the brutal and totally unexpected death of a loved one. The survivors never forget either. In this article, survivors of the Minneapolis workplace shooting talk about their experience:

"Oh, my God, it's Andy! He's got a gun!" Yosef Ben Harush, a manager, shouted to other employees as he ran downstairs to the basement to tell workers to get out of the building.

Interviews with survivors of the state's worst workplace shooting in memory were made public Friday by Minneapolis police. Accent workers described the minutes filled with terror and bloodshed at the Bryn Mawr sign factory on the afternoon of Sept. 27. Some watched as Engeldinger calmly walked or jogged by them, wordlessly shooting employees while sparing others.

Five people died and three were wounded in the rampage. Engeldinger, 36, then took his own life.

Some employees interviewed by police said they knew that Engeldinger, the strange and quiet man who worked on the production floor, would be fired that day. His employment file "indicated there were issues regarding quality of work, showing up for work on time and dealing with other employees," according to the police report.

There's just nothing like the surprise and terror of someone who has a gun that can be used indiscriminately to kill anyone in the path of the shooter- from close range or far. It's difficult to get away from the trajectory of bullets. Terror reigns. Adrenaline rushes. Fear takes over. Survival instincts happen. Get away from this guy with a gun firing bullets at anyone in his path. Hide. Run. Call 911. And using your own gun rarely works in cases like this. But never mind, the NRA and its' minions sell myths about how easy it would be for someone carrying a gun to take out a shooter. It's a myth. Did Engeldinger buy the myth? He had guns for self defense. He had a permit to carry his gun. He bought into the NRA's version of American and then carried out a mass murder. He was mentally ill. Never mind. Guns should be sold to anyone.

Let's look at yet another article about our nation's spate of mass shootings that have not managed to make it into any discussion by the two men running for President, nor any candidates for that matter:


On his visit to Aurora, Barack Obama spoke a few half-hearted words—he might have wished he could venture more—on the topic. His rival, Mitt Romney, continued simply to pander to the rich coffers of the National Rifle Association. In Washington, you can be assured that hardly anyone will do more, and not simply because members of Congress “don’t have the spine to act,” the verdict of Rep. Carolyn McCarthy, whose husband was murdered and son was wounded in a gun attack on a commuter train 17 years ago. The stark reality is that the half-century battle for gun control has been lost politically—again, and again, now perhaps permanently. And that outcome seems impervious to any new outrage perpetrated in the increasingly grim randomness of America as a recurring, movable shooting gallery.

How sad and how ludicrous. There is a lot more in this article worth reading as well because it highlights the stupid and dangerous influence of the NRA on politicians. We all know why guns cannot be mentioned in the political silly season. The NRA. Shhhh. Don't mention guns or gun policy. The Brady Campaign and Mayors Against Illegal Guns tried to get the issue onto the list of questions asked during the first Presidential debate in Denver, held just miles from the Aurora and Columbine shootings. But the question was not asked along with a whole host of others that weren't asked in the free wheeling debate that was allowed by moderator Jim Lehrer. From the Brady Campaign's President Dan Gross ( linked above):

Tonight an opportunity was missed to move our national conversation forward, but we, and the families, know that the conversation has only just begun.

We represent the 87 percent of Americans who want better and stronger policies to prevent gun violence and who believe we are better than a nation where mass shooting tragedies like the one in Aurora happen with such alarming frequency.

We refuse to accept that politics stands in the way of our right to live in a safer nation. In the coming weeks and months, we will continue to press our representatives to do what’s in the best interest and safety of the American people. These families, and the families of those murdered every day by guns, deserve nothing less. They know, we are better than this."

I wrote a previous post about why the question should be asked. In that post, I included this video which was run as an ad right before the televised debate. It's worth looking at it again:


I guess even a survivor of one of our nation's worst mass shootings can't even get the attention of our leaders. We shouldn't talk about guns. Shame on us all. We are better than this. My letter to the editor in the Duluth News Tribune was printed 2 days after the debate. This letter was printed in the Minneapolis Star Tribune as well imploring us all to take a good hard look at a very important national issue. As the letter writer said, "We have been conditioned by movies, television and videogames to believe in a fantasy world where an armed person is a kind of superhero -- a Dirty Harry keeping the world safe from the bad guys." Our "fantasy world" that says more guns makes us safer is just that- myth and fantasy propagated by one of the nation's largest and most well funded lobby group.

If we can't discuss such common sense issues as this important public health and safety issue, but rather talk about conspiracy theories about fudging numbers for the recent jobs report or whether or not President Obama was born in the U.S. or whether or not women should have access to birth control in the year 2012, we are fast becoming a nation that just doesn't care about what is going on in the every day lives of Americans. It's a fantasy world for sure. Except real people are dying in large numbers every day because of our nation's refusal to deal with our gun violence problem. Surely we are better than this.
Posted by japete at 8:03 AM