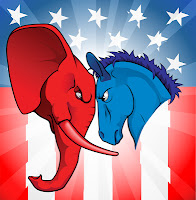 Will there be a question asked about guns and gun policy at the Presidential debate tomorrow? There should be. Two high profile shootings have taken place just miles from Denver, the site of the first debate. Columbine, of course, was one of the first major school shootings that kick started a major gun control debate in America. 13 were killed and 21 were injured. What happened as a result? Left to elected leaders, nothing. But citizens in Colorado got enough signatures to put a ballot measure to close the loophole which allows private sellers to sell guns without background checks put to a vote. The ballot measure was passed by a large margin which is what happens when you let the people decide rather than the legislators who are too afraid of the NRA to speak up.

The second more recent mass shooting, of course, was in Aurora- the now infamous movie theater shooting which killed 12 of the 70 who were shot:

This bears repeating:" Seventy people were shot or otherwise wounded, the most victims of any mass shooting in United States history[27] and the deadliest shooting in Colorado since the Columbine High School massacre on April 20, 1999." And what has happened as a result of this senseless shooting? Nothing. Why? Because it's election season. Candidates are so stupidly afraid of the mythical power of the NRA that the word guns can not be uttered. That which shall not be named. GUNS. SAVING LIVES. SENSIBLE LAWS. NO CONFISCATION-JUST LAWS TO STOP DANGEROUS PEOPLE FROM GETTING GUNS. BACKGROUND CHECKS ON ALL GUN SALES. LIMITING INTERNET AMMUNITION SALES. LIMIT TYPES OF AMMUNITION AND ASSAULT WEAPONS. SENDING RECORDS OF DANGEROUSLY MENTALLY ILL PEOPLE TO THE FBI'S NATIONAL INSTANT CHECK SYSTEM. PUBLIC HEALTH AND SAFETY. SAFE STORAGE OF GUNS. REPORTING OF SUSPICIOUS SALES OF GUNS AND AMMUNITION. COMMON SENSE ABOUT GUN POLICY. And much more.

But families of the victims of the Aurora shooting want the candidates to not only discuss the issue of gun policy, they want action:

Victims of the Colorado theater shooting that left 12 dead and 58 injured are speaking out, urging Mitt Romney and President Barack Obama to address gun control during Wednesday's presidential debate in Denver.

"When you watch the presidential debates, ask yourself, who has a plan to stop gun violence?" Aurora shooting survivor Stephan Barton, 22, asks in an ad.

"Let's demand a plan," Barton adds after highlighting that 48,000 Americans will be killed by firearms during the next president's term - "enough to fill over 200 theaters."

The ad is sponsored by the bi-partisan gun control advocacy group United Against Illegal Gun Support Fund and is accompanied by a petition urging the candidates to address the issue on Wednesday.

There is plenty to talk about. But will it happen? I am not the only one to want a question about guns asked at the debate. The Washington Post's Ruth Marcus posted this article today. Here is the question she thinks should be asked:


President Obama, during the 2008 campaign you called for reinstituting the assault-weapons ban. Despite the shootings in Colorado, Arizona and elsewhere, you have remained silent on gun control as president. Will that continue in a second term?

Great question. Mitt Romney was once in favor of an Assault Weapons Ban and other reasonable gun laws for goodness sake. Now he is endorsed by stupid and crazy NRA Board member Ted Nugent and made this appearance at the recent NRA convention.

Give me a break. Mitt Romney is not a gun person. He is not a hunter though he claimed to have shot at some varmints once upon a time. Really? Why does the NRA like this insincere man who changes his positions with the wind.

President Obama used to talk about reasonable gun laws as well. That was before he got so scared of the NRA one he became President that he dared not utter the word GUN. We know that he is in favor of reasonable laws to stop senseless shootings from his prior record. The NRA gets apoplectic about the President wanting to take all their guns away-a specious and ridiculous claim with no fact behind it. But never mind, the NRA's Wayne LaPierre rants conspiracy theories, saying that because the President hasn't talked about guns, that means it's more certain that he's out to get your guns. You can watch this totally nonsensical rant below:

Of course, he has more threats against his life than just about any other President. This most recent one on Facebook came from a Tennessee congressional candidate, no less:

A Republican candidate for Congress says his Facebook post featuring a photo of his gun and a “Welcome to Tennessee” message for Barack Obama was in no way meant as a threat to the president.

“Good Lord, no,” Brad Staats told The Tennessean in a telephone interview on Monday. “Absolutely not. I’m not one of those that would ever threaten the president. He’s probably got enough of his own stuff to worry about without me.”

Wow, will this guy get elected to public office? Let's hope not but Tennessee loves loves and gun rights. I suggest this man is not qualified to run for public office. But this is what we get when we give the NRA the mythical power it has managed to gain.

And here is another plea for moderator Jim Lehrer to ask a question about sensible gun laws from Fox news' Juan Williams:

President Obama, the Brady Campaign to Prevent Gun Violence has given you an “F.” They say the failure is based on your “lack of leadership” the gun control issue.  In your first term, we have had three of the worst mass shootings in US History, (Tucson, Arizona, Aurora Colorado, and Oak Creek, Wisconsin) Could you have done more to stop the spread of assault weapons and gun violence over the last four years?

Will you make gun control a priority in your second term? Are you paralyzed by the National Rifle Association’s political clout?

Great question. Can we at least have a national conversation about one of our biggest national public health and safety problem? We all know we have too many gun violence victims. But we sit back as a country and just let them happen because of one mythically uber powerful lobby group- the NRA. This is ludicrous, unacceptable, irresponsible and just plain wrong and dangerous. If you agree with me, check out the we are better than this web site to let Jim Lehrer know you want a question asked about guns asked at the debate. Or check out the demand a plan site to demand that our Presidential candidates and other elected officials come up with a plan to deal with too many people being killed and injured in daily senseless shootings.
Posted by japete at 4:48 PM

Email ThisBlogThis!Share to TwitterShare to FacebookShare to Pinterest
vention, Open Carry, Demand a Plan, Jim Lehrer, Mitt Romney and guns, NRA, President Obama and guns, Presidential debates, Ted Nugent, Too Many Victims, We Are Better Than This