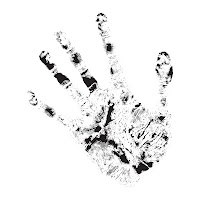 Didn't we just know this would happen? When a "law abiding permit holder" shoots someone, he/she sure as heck wants everyone to think it was the other guy in the wrong. Because surely, they, themselves, as self styled safe gun owners, would not make a fatal mistake. It doesn't look good, does it? But these folks try their hardest to defend their actions. Lives are lost. People are grieving for the loss of a loved one or a friend and the shooter is making things up to protect himself. Such is the case with George Zimmerman. Remember him? He hasn't been much in the news of late. But yesterday, some new evidence was released in the case against him for shooting Trayvon Martin.

"The results from forensic tests also included within the documents show that Zimmerman's DNA was the only one that could be identified on the grip of the gun used to shoot 17-year-old Trayvon Martin.

The results rule out Martin's DNA from being on the gun's grip.

Hmm. This just does not fit with the story told by Zimmerman. More from the article:


Martin was shot to death by Zimmerman, a volunteer neighborhood watchman, in a Sanford townhouse complex. Zimmerman said the shooting was self-defense.

Zimmerman said Martin was on top of him, slamming his head against the ground when he grabbed his gun from a holster before Martin could get it.

I suggest that if we didn't have Stand Your Ground laws on our books in quite a few states, we wouldn't need to be wondering about cases like this. It would most likely be the case that when someone shoots a person in a questionable case such as the Trayvon Martin case, the onus would be on the shooter to prove that he/she was practicing actual self defense. Instead, with the laws we have in some states, the onus is on the state to prove that the victim didn't deserve to die because someone with a gun had a feeling the victim was doing something wrong or about to do something suspicious that may or may not harm said shooter. There is no common sense to these gun laws. The NRA and its' minions have made sure to muddy the waters by injecting their agenda that more guns make us safer and that they themselves get to decide the rules after the guns are used in shootings involving Stand Your Ground. It may be that Zimmerman will not use Stand Your Ground as his defense but that was clearly his intent when he shot Trayvon Martin. Without the Florida law in place, it is much less likely that Zimmerman would have felt bold enough to shoot his gun that fateful night. Rather than a license to kill we should do a better job of making sure vigilantes like George Zimmerman don't get gun permits in the first place or, at the least, do a much better job of screening people who carry loaded guns around in public places. We are better than this.