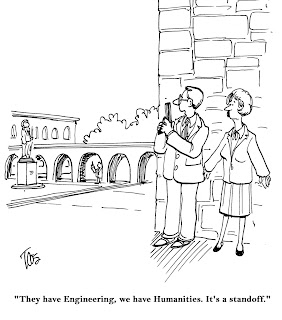 Raise your hand if you think this is a great idea. Raise your hand if you want to send your own students to NRA University. The specious and unsupportable claim in the video that college campuses are places that encourage anti-gun thought is part of the NRA propaganda. If you don't agree with the NRA, then you are the enemy. Never mind the facts. Does anyone remember the Aurora shooting? Does anyone remember that the shooter was a severely mentally ill college student? Does anyone remember Virginia Tech? Does anyone remember that Cho was a mentally ill college student? Does anyone remember the Northern Illinois University shooting? Students should be studying, enjoying friendships, preparing for a future and perhaps working. They shouldn't be thinking about guns. Though campus shootings are big news and usually are mass shootings, they are rare. The chance of being shot on campus is much less than in the home or on the streets of our community. Mass shootings get a lot of attention as well they should. But 32 Americans a day die from gun homicides and many more from accidental discharges and suicides. Putting more guns in the hands of young adults will also increase the chances of using that gun off campus as well in gun homicides, suicides and accidents.

There are ways to survive a mass shooting without a gun. Virginia Tech survivor Colin Goddard was just plain lucky. He has said over and over that a gun in the Virginia Tech shooting would not have changed the outcome. His cell phone call actually alerted law enforcement to the location of the shooter and within minutes of his call, Cho shot himself as police approached the scene. Here is an article about what to do in case of a shooter on campus.

“The odds of being involved in a situation like this are similar to your chances of being struck by lightning,” says Spivey, the narrator.

The video teaches the “out” strategy. Students should first try to get out. If they can’t get out, they should find a place to hide out. Lock the door, barricade it with heavy objects and turn off the lights. If they can’t get out or hide, Spivey says, students might have no other option than to devise a plan to attack the shooter using strength in numbers.

It’s a more forceful message than Amador ever got during lockdown drills at Beloit Memorial High School.

“I was always taught in high school to huddle,” she said. “Go to the corner and be quiet.” But “Shots Fired” tells students to spread out.

“It’s much easier for someone to shoot a group of people who are huddled in one place than if they are scattered around the room,” Spivey says in the video.

UW-Whitewater had counselors on hand at the event in case students felt distraught by the dramatization, but no one needed consoling.

“What really came as a surprise was the fact that you could use sort of anything (as a weapon),” Amador said. “I’m an athletic person. I would use basically anything I could get my hands on and throw whatever I had, probably at their head.”

Adding more guns to the situation is not the answer. Look at the video below to see why. I have provided many examples of incidents where a shooter was stopped by means other than guns. But a better idea is to prevent the shootings in the first place by passing sensible gun laws to keep guns away from people who shouldn't have them. Why wait until a tragedy happens? America has been waiting to do something after multiple tragedies over many years. And nothing has changed. Except that the NRA continues its' campaign to get more guns into more hands. The NRA is never one to ignore an opportunity to get more people to buy guns. Follow the money. Public safety be damned. If college students are led to believe they can protect themselves from campus shootings, they just might buy this crap. Never mind that one needs to be 21 in most states to buy and carry a gun around. So that leaves a very small group of students left to protect everyone else on campus from a shooter. Never mind that if someone with a loaded gun isn't in the particular hall or class where a shooter appears. Never mind that it is so unlikely that having a gun in a mass shooting would result in killing or stopping the shooter. The NRA doesn't care. The NRA doesn't care that more guns on campus is a terrible idea and could result in senseless incidents resulting in accidental discharges, suicides and yes, even homicides. No matter. What's a little collateral damage amongst gun owners? College presidents and security personnel don't want students to carry guns on college campuses. Never mind. The NRA knows better. They want them. They aren't very successful at getting laws passed to force college campuses to allow guns. That's because it's such a bad idea.

ABC's 20/20 program, 'If only I Had a Gun" did an exposé about the idea that a person with a gun could make a difference in the event of a shooter entering a room or gathering place. Here is the video:

This video, of course, has been panned by gun rights extremists. What is shown in this video is important information, however. It happens to be be true. People who go through the police officer simulation videos understand how difficult it is to shoot at a real live moving person in an unexpected situation. Human bodies react to situations like this, as is shown in the video, with autonomic responses in blood flow and adrenaline. That is why it is so important to get proper and continuous training when carrying a loaded gun around in public. Some of my readers here have claimed that training is not necessary. That is ludicrous, of course. That sort of false assertion and bravado can only lead to stupid and dangerous decisions when faced with a real life situation. Common sense tells most people that more guns at a shooting scene such as that at the movie theater in Aurora, CO in July won't work out very well. So training students at NRA University is not for safety. It is to get more people to buy guns. We are better than this.
Posted by japete at 6:39 AM