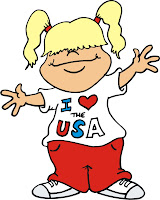 So recently on this very blog, some of the gun rights extremists tried to claim that their own training surpassed that of law enforcement to carry their loaded guns around in public. I didn't believe them. I still don't. I provided a video of Lilly Habtu, Virginia Tech survivor, getting her permit by doing the Internet course for the Virginia license. She cheated. She got her permit within weeks. Stupid and dangerous. The rise in out of state residents getting Virginia permit to carry has increased. Why? Well, maybe it's that a third grader could answer the 15 true/false questions on the other end of the computer screen. If we want to know why so many people who shouldn't be carrying guns around in public do so anyway, look no further than Virginia. From the article:

One of at least two Internet sites that offer the training, http://www.onlinegunclass.com , highlights on its home page the eight states that allow residents to carry a concealed weapon if they get a permit from Virginia.

"You heard me right - Virginia," a pitchman says in an online promotional video outlining the process for potential customers.

Their home states may impose more stringent requirements, he tells prospects, but they can get a Virginia permit simply by paying $39.99, reading five chapters about firearms and correctly answering 15 of 20 true-or-false questions on a quiz. The customer receives a certificate to be mailed along with other application materials to the Virginia State Police. After passing a criminal background check, the applicant receives a permit to carry a concealed weapon in his or her home state and 26 others that have reciprocity agreements with Virginia.

Customers can take the test up to four times if they have trouble passing, the man in the video says, adding: "I don't think it's going to be a problem."

Here are a few of the sample questions that, if answered correctly, will allow anyone who can answer them to carry a loaded gun around in public:


"The first step in cleaning your firearm is to make sure it is unloaded," says one true-false offering.

"Always keep firearms pointed in a safe direction," says another.

Several blogs are also keeping track of what's going on in the world of law abiding gun owners/gun permit holders. I suggest you read them. The Kid Shootings blog, to which I contribute, posts articles about actual shootings of and by kids and teens. It's startling to read what is posted there. Here is just the latest tragic incident from the state of Virginia:


An 11-year old boy in Loudon County, Virginia, found a loaded handgun that his father had hidden in the slats of the boy's bunk bed.  While he and his parents were together in the boy's room, the boy put the gun to the back of his mother's head and pulled the trigger, thinking the gun wasn't real.  The gun fired and hit her point-blank.  She is now in serious condition.

49-year-old Bing Michael Yee, of Cedar Park, Texas was out walking his dog when a neighbor's dog came out of a house and ran towards him. According to police, Hayes pulled out a handgun "and just starts shooting the dog. I don't know how many rounds he fired, but the dog was killed. People were either in a yard near Yee or across the street from him."

One of the women standing nearby was injured by shrapnel or debris kicked up by the shots. She was taken to the hospital, treated and released.

According to witnesses, when the people outside reacted to Yee shooting the dog he aimed the gun at them and continued to point the gun at another neighbor who stepped outside when he heard the shots. Several people told him, "You need to put your weapon down."

The dog's owner, Amber, told reporters, "Shock, horror, disbelief. I was probably 20 feet from the guy when he unloaded his gun into my dog."

"I've met him. I've been in his house," said Billy, Amber's husband. "His dog has played with my dog. I don't understand why there was so much aggression and violence and the outcome."

Yee, who has a concealed weapons permit, lives on a corner lot with an NRA sticker on his front door. He has told neighbors that he owns dozens of guns and thousands of rounds of ammunition.

Yee was arrested and charged with aggravated assault with a deadly weapon and deadly conduct discharging a firearm.

Yup. Those permit holders with their loaded guns fear their own shadows around every corner and are so sure their guns are going to come in handy in a dangerous situation. Yet, this is what is happening instead. They are endangering the lives of other people. Where is common sense? We are better than this.

Where are our politicians when it comes to protecting the public from incidents like these? Nowhere. They are afraid to mention the word gun when out talking to constituents or at national party conventions. The Democrats, in particular, at least have a tepid position on gun policy. They refuse to mention it for fear that the gun rights extremists will come unglued and say ridiculous and false things about them. I will write more about this in a coming post. From the article:

Most of the gun language in the Democrats' draft platform mirrors what was in the 2008 document, but the call for an "open conversation" about gun control — something that's been all but absent for years on Capitol Hill — is a new addition.

The provision marks a subtle shift in messaging for Democratic leaders who have been reluctant to press for tighter gun control — or even hold hearings on the subject — for fear of a political backlash.

But the issue has been tough to ignore this Congress in the face of a long series of headline-grabbing shooting sprees stretching back to the very first days of the 112th, when then-Rep. Gabby Giffords (D-Ariz.) was critically injured during a rampage that killed six people in her district.

Indeed, the draft platform's call for a public debate on guns is pulled almost directly from President Obama's reaction to the Giffords shooting.

"Clearly, there's more we can do to prevent gun violence," Obama wrote in a March 2011 op-ed in the Arizona Daily Star. "But I want this to at least be the beginning of a new discussion on how we can keep America safe for all our people."

Does anyone remember this moving moment at the Democratic National Convention?

Does anyone remember how Representative Gabrielle Giffords got to be in this tragic position? Jared Loughner was a law abiding Arizona gun permit holder. He shouldn't have been but he was anyway. 6 people were shot dead in one shooting at a Tucson shopping mall because of our loose gun laws and Gabby Giffords led the Democratic National Convention in the Pledge of Allegiance in her halting speech, leaving everyone in tears. Here was an opportunity to discuss common sense gun regulations. But the chance was not taken. We are better than this.

The Republican positions on gun policy are in concert with the NRA:


For Republicans, the Second Amendment is not limited to the holdings of the Supreme Court decisions District of Columbia v. Heller and McDonald v. City of Chicago, where 5-4 majorities only held that armed self-defense in the home, with a hand gun, is a fundamental right of law-abiding citizens. Allegedly, the right to keep and bear arms also "includes the right to obtain and store ammunition without registration," a right to self-defense "wherever a law-abiding citizen has a legal right to be," the ability to purchase and maintain unlimited ammo clips, and the ability to purchase and maintain assault rifles. All and all, Republicans see the Second Amendment as a means to enable "Americans to defend their homes and communities."

The writer of this article ends with the truth about the two versions of the world espoused by the gun rights extremists and those who are more interested in protecting public safety:


The point here is not that public gun prohibitions are the definitive answer to solving or ending gun violence. There may be some truth to the argument that more guns in the hands of properly trained, law-abiding citizens deter crime. Instead, the point is that public gun regulations to preserve order and prevent public injury are part of our Anglo-American tradition, and it is a subject that has always been regulated by the legislatures in the interest of the common good. It is for this reason that the Republican's laissez-faire interpretation of the Second Amendment is worrisome. Not only does it seemingly foreclose an open and honest discussion on the dangers of gun violence, but it implies an armed society facilitates law and order, not government order. And if this is the Republican platform on guns, the Founding Fathers are shaking their heads at the Republicans and nodding in support of the Democrats push for "an honest, open national conversation about firearms."

Look no further than this to understand the differences- Mitt Romney was endorsed by none other than NRA Board member Ted Nugent. Nugent's extreme positions are frightening and yet embraced by the far right extremists and now a candidate for the President of the United States. It is the silly season. But it's not silly when 32 Americans a day die from gun homicides. Check out the positions of candidates on the gun issue and ask them to tell you how they will protect citizens from senseless gun violence. Since the American public is in favor of a serious national discussion and common sense, ask they if they are willing to do what the public wants. If not, they should not be elected.