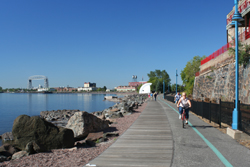 (This article has been updated since it was published.)

In my home town, we have a lovely wooden walk way extending along the shores of Lake Superior from the Canal Park area of downtown to the far eastern end of Duluth. I walk on this Lakewalk often with friends and go there for gatherings ( it is near the Memorial for gun violence victims). The City Council in Duluth just recently decided that people will no longer be allowed to smoke cigarettes along this walk way. From the article:

"Duluth police said they believe the resolution passed by the City Council on Monday forbidding smoking along the Lakewalk and adjacent parks will give them another tool to deal with those who create a public nuisance there.

Police Lt. Eric Rish said police have 30 days to work on developing a strategy on enforcement before the ordinance goes into effect.

“A lot of the ordinance is designated for Lake Place Park and the Lakewalk. Will it make it easier to do some enforcement? Yes,” Rish said. “We’re always trying to eliminate nuisance crimes and quality-of-life crimes, and I think the experience on the Lakewalk will be improved by having it in place. We’re going to be working on a strategy of how to enforce it.”"

So, to stop nuisance crimes and improve the quality of life along the Lakewalk, there will be no smoking. Guns?- allowed on city property and can't be prohibited. Is there something wrong with protecting citizens from gun crimes and gun violence along the Lakewalk by telling people their guns are not welcome along the walkway? In all the years I have walked this area, I have never seen an incident that frightened me enough to think my safety was at risk. I don't walk there at night alone. There have been a few crimes of violence along the walkway. I don't walk there in the dark or alone. That is just common sense. I think it will be nice to not see cigarette butts along this beautiful walk or not smell smoke. There is something jarring about being in this place of so much beauty and walking behind someone who is smoking. There is also absolutely no need for a gun here. Why don't we tell people they can't bring their guns to the Lakewalk? It's the Second Amendment stupid. The NRA and its' minions use it to stop any reasonable laws to keep the public safe. There aren't a lot of crimes along the Lakewalk but allowing people with guns here just doesn't make sense. I write enough about permit holders and ordinary law abiding gun owners misusing their guns in public that preventing any potential for a problem makes a lot of sense.

Guns are generally treated differently than just about anything else when it comes to public safety. What about this court case decided in favor of a Walmart store that sold ammunition to a minor and then it was later used in a murder? The Mississippi store was found to be not liable for the sale of the ammunition to a minor. Hmmm. Stores can't sell cigarettes or alcohol to minors and must see ID to make sure they aren't. Ammunition and guns? Maybe not so much. From the article:

Walmart, the largest seller of firearms in America, expanded sales of guns from 1,300 to 1,750 stores -- about half of its U.S. fleet -- last year, according to Hargrove.

Walmart fired Martha Parker, the worker who sold Moore the ammunition, a few days after the shooting occurred. Parker claimed in court that she had not known the bullets were for the underage Moore, and thought she was selling them to his friend, Ladarius White, who was shopping with Moore. But the shooter claimed he had given White money in plain view and lied to say he had forgotten his ID.

The court said that even if Parker knew she was selling to someone underage, Walmart wasn't responsible for the death because it was impossible to know that Moore would use the bullets to commit a violent crime. But dissenting judges argued that anyone could guess that a minor is more likely than an adult to misuse a firearm, the very reason why there is a law prohibiting young people from possessing guns in the first place.

"Though 18- to 20-year-olds make up only about 5 percent of the population, they account for about 20 percent of homicide and manslaughter arrests," said Daniel Vice, the chief attorney at the Brady Center to Prevent Gun Violence, a non-profit that lobbies for gun control. "This was a flawed ruling."

A 2005 law gives gun sellers and manufacturers broad protection against lawsuits. Gun control groups, like the Brady Center, have been fighting the law in courts ever since, Vice said.

The National Rifle Association, the largest gun rights lobby, did not return a request for comment Tuesday.

The NRA doesn't want to comment on cases like this. It makes them look bad. Minors should not be able to buy guns and ammunition. We are talking about lethal weapons designed to kill people. If you but read the Kid Shootings blog, you can find more than a few incidents of kids and teens misusing guns in shooting accidents and homicides. There is a reason guns, ammunition, cigarettes and alcohol shouldn't be sold to minors. It makes common sense for the safety of our young people and public safety in general. We are better than this.

A businessman who gunned down a police officer at his suburban Detroit home held authorities at bay for hours with an arsenal of high-powered rifles and other weapons before finally killing himself, officials said Tuesday.

Officers were responding to a report of a possible suicide attempt Sunday night at the home in West Bloomfield Township when Ricky Coley shot Officer Pat O'Rourke, authorities said. About 15 families were evacuated from nearby homes during the subsequent 20-hour standoff that ended when Coley was found dead in his bed Monday evening.

More than 1,000 people attend a memorial vigil for O'Rourke outside the township police headquarters Tuesday night.

Sheriff Michael Bouchard told reporters Tuesday that the standoff lasted so long because relatives had warned investigators about his weapons, and because of a barrage of gunfire from Coley.

"It appeared to be just a battle mindset," Bouchard said. "He had the firepower. He had barricaded windows and covered doors. And the way he was firing — probably because part of his military background — he knew the best way to fire and not be spotted by a sniper."

Yesterday I asked, are we at war? A "battle mindset"? More from the article:

Coley, 50, was recently divorced and had been ordered to leave the home by Monday. He also faced financial and legal turmoil, including a lawsuit from federal authorities accusing him of mishandling employee's insurance funds. West Bloomfield Township police said they had also been called to Coley's home about a month ago because he was reportedly suicidal.

These are the kind of people the NRA supports and encourages. Who needs weapons, ammunition and equipment like this man? People who comment on my blog have arsenals like this and defend their right to have them. It is stupid and dangerous. A police officer is now dead senselessly. Where is common sense? Even the neighbors were at risk from this man's bullets:

Residents who live in the upscale neighborhood where the standoff happened were back home Tuesday.

Jeannie Zimbalatti pointed to a bullet hole in one of her bedrooms. She said her family was "trying to reconcile how we knew Rick to what we were seeing on TV."

"We were unaware of what was transpiring in his personal life," she said. "I'd had conversations with him about his business, and we knew things were tough. But there were no signs of any of this coming. He was an incredibly nice person to us."

"He was an incredibly nice person to us." Why do the neighbors and friends often say this? We have angry and unstable people with arsenals of guns in their homes. One or two small or large things can set them off and they start shooting. They walk around looking and acting like everyone else. They are normal law abiding gun owners until suddenly they aren't. This man was a firecracker waiting to go off.  Guns are dangerous. People die.

Within minutes of posting this one, I ran across yet another shooting in a domestic case. This one involved a South Dakota man with an order for protection who shot an innocent woman when he was headed to a beauty salon to likely do harm to his estranged wife. How many more of these? How many? Why do we tolerate a culture where angry men with power and control issues are able to get their hands on guns when they clearly shouldn't? This one is just one of way too many. And what's with domestic abusers shooting women in beauty salons? Anyone remember this one? 8 dead in 2011 California beauty shop shooting. Where is common sense?

9/13- As I was saying, the smallest of slights can lead to a law abiding citizen getting out his/her gun and shooting someone. Here, now, is the latest from St. Louis, MO:

The shooting happened during an argument early Monday. Police say the men were arguing over whether the cuts of meat they were planning to cook were pork steaks or pork chops. Cunningham said they were pork steaks, but Lowe disagreed.

Police say the argument became physical and the two had to be separated by someone else in the house. Cunningham then allegedly retrieved a shotgun and shot Lowe, who died later at a hospital.

What are you having for dinner tonight? I suggest you ask your relatives and friends to check their guns at the door.

And another. Here is a man who could afford an AR-15 and other guns but was turned down for food stamps after Hurricane Isaac:

Louisiana State Police say a claims processor in LaPlace told officers a man became irate after being denied aid Tuesday evening after recent Hurricane Isaac. They say officers providing security at the location saw the man go to his vehicle and troopers, sheriff's deputies and national guard troops surrounded and disarmed him.

That's right. Food stamps, no; guns, yes. Why not? Is this another law abiding citizen who didn't get what he wanted so decided he would use force and maybe even injury and death to get it? Where is common sense?