Beware of guys with guns at the polls in November 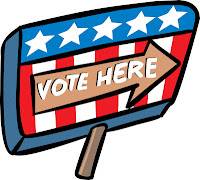 There is a scary thing happening in our country. Voter integrity is threatened in many states, including my own where a voter suppression issue is on the ballot as a Constitutional Amendment. As if this isn't bad enough, the gun rights extremists in Florida believe that they could and should shoot people who they suspect of voter fraud. This is so frightening that I'm surprised there hasn't been more national attention to it. Please watch an interview with a Florida gun owner who is proposing this idea from the linked article above:

Raise your hand if you think this is a good idea. Statements from Nelson, in the video, should be taken seriously. If even one person is shot at the polls, we are not a democracy any more. Does anyone remember the days when black people were denied the right to vote and when women were denied the right to vote? Who are these folks trying to stop now? There is no voter fraud, or very little of it. But never mind, the far right makes specious claims otherwise and have managed to get some really bad laws passed to stop certain people from voting. These would be the elderly, college students, people of color and low income. Voter suppression is ugly and un patriotic and should not be tolerated anywhere. But the idea that law abiding gun owners should be allowed to shoot, with impunity, people they themselves think have committed voter fraud should send chills up and down our spines. Far from "Protect the Polls", we need to protect voters from law abiding gun owners with crazy and dangerous ideas.

Let's examine some of the words spoken in defense of this illegal activity promoted by law abiding gun owners. "We would like the law to be, if you suspect someone's committing voter fraud, you have a legitimate reason to believe it, you can legally pull out your weapon and not face criminal charges to stop it." Wow!! This takes my breath away.

A judge determined last week that the Florida voter suppression law could not be enacted the way the far right legislature wanted it to work. There was a law passed that made it almost impossible for "outside groups" like the League of Women Voters to register voters. We all know why the law was passed. Most of the newly registered voters in the 2008 election happened to have been Democrats. Were they registered illegally? No. Some groups happened to have registered more voters than others and worked harder. But to make registration of new voters almost impossible is beyond the pale and a clear effort to stop certain voters from taking part in our national elections. From the article:


Looking at some of the harsh laws which Florida has passed, it's easy to see how Republicans have implemented the game plan that Greer talked about them crafting for the past four years. They're throwing anything they can that may stick to get fewer African Americans and Latinos to vote, constantly discovering secret new belts to punch below. It's had a devastating affect on registration already, and the Republicans will fight for every law they can keep on the books without costing them more than it's worth. With Romney's unpopularity, this move is important enough to them that Republicans will probably be tattooing this issue's talking points on their henchmen.

Are the henchmen now the guys with the guns? And who will they shoot at the polls? Will they be on the look-out for minority voters who they don't like?  This is too ugly to consider but the words of Nelson, above, make this possibility more than just speculation. Watch out for guys with guns at the polling places. They do not have good intentions and they might just decide you look suspicious enough to get shot to death for exercising your right to vote. This is the vision of our country espoused by the NRA. It is dangerous and unacceptable. It is promoting gun violence for no reason whatsoever and promoting the idea that the guys with the guns get to make the rules.

No, Mr. LaPierre. You don't get to decide who votes and who doesn't. Voting is a right. Unless there is a very good reason, such as being an actual felon, or a non naturalized citizen, everyone should vote. We should be making it easier to vote in America, not harder. These laws are making us look like a country that needs to call in United Nations monitors to make sure our elections are legitimate. Where is the outrage? Where is common sense? Certainly, we are better than this.

It has come to my attention that this is a hoax. I have no more details about who the man in the video is or why he was involved in the hoax. As more details emerge, I will update the post or write a new one. For now, though, I am thankful that this nonsense isn't for real and hope that nothing like this is suggested or actually happens during our election season.
Posted by japete at 12:38 PM