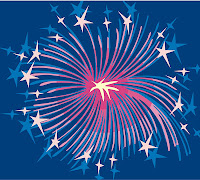 So today I went shopping at the local Target store to get some things for our week at our cabin with the family. I decided to get some "Pop Its"- little firecrackers that can be thrown against the pavement and make a popping noise with a little smoke. The clerk asked me for my ID!! Not only that, she had to physically scan my driver's license. Let's take a look at fireworks and firecrackers going into the July 4th holiday. What are restrictions on firecrackers? Here is an article about restrictions in my state of Minnesota and attempts to loosen the restrictions:

"In Minnesota, what are called "novelties" -- sparklers, snakes and small fizzy fountains -- were legalized in 2002. The bigger consumer fireworks, such as bottle rockets, firecrackers and multi-tube skyrockets that blossom at 150 feet, remain illegal, but stubbornly popular. In the Twin Cities area, Wisconsin's thriving border fireworks marketplace is often the source.

Those who deal with the aftermath of fireworks displays gone awry are solidly opposed. Police and fire chiefs associations, burn centers at Regions Hospital and Hennepin County Medical Center, Children's Hospitals and Clinics, the Academy of Ophthalmology, the American College of Emergency Physicians and the League of Minnesota Cities are among the dozens of groups lined up against the proposals.

There was testimony from a man who owns a fireworks company. Of course, we can follow the money. Where there's money to be made, public safety be damned. This man, along with some legislators, did not consider the expansion of fireworks sales to be a problem. But others did:


Dan Winkel, the Andover fire chief and an official of the Minnesota Fire Chiefs Association is unmoved by Kriesel's arguments. He says fireworks have been responsible for several major grass fires in recent years, and the number of fireworks-related injuries tripled in the year after the 2002 law was passed. "We continue to oppose any and all expansion of fireworks, in that they will cause more injuries and fires that we will have to respond to," he told a Senate committee.

William Mohr, medical director of the Burn Center at Regions Hospital, said the number of burn injuries from fireworks is directly related to the availability of the product. "I don't think you can possibly put an economic value on either the catastrophic injury or mortality as a result of these devices," he told legislators.

"Eleven-year-old kids who lose their eye ... that's what I want you to think about, when you're trying to decide if we can get a little more income from surrounding states off fireworks sales."

Whew. Thankfully Governor Dayton vetoed this bill too. ( He also vetoed the Shoot First bill in this legislative session. ) In doing a little research, I found out that even "Pop Its" can cause some injuries so need to be used carefully. I will be sure to do so. You can see here that deaths and injuries from fireworks don't show up on the top 10 leading causes of death, according to the Centers for Disease Control. Deaths from homicides and suicides do, though and most of those come from firearms. Let's check this article so find out how many deaths and injuries occur from fireworks. From the article:

CPSC staff has reports of two fireworks-related deaths during 2009.  Both fatalities involved aerial shells.  In the first incident, a 41 year-old male was killed in an explosion of a professional display mortar shell that he lit in his backyard.  In the second incident, a 26 year-old male lit a consumer grade mortar shell that was in a launching tube that he held over his head.  The shell discharged from the bottom of the tube resulting in a skull fracture.  CPSC staff has reports of seven fireworks-related deaths in 2008.  Reporting is not complete for either year and the actual number of deaths may be higher.

• Fireworks were involved in an estimated 8,800 injuries treated in U.S. hospital emergency departments during calendar year 2009 (95 percent confidence interval 6,800 – 10,800).  CPSC staff estimated that there were 7,000 fireworks-related injuries during 2008.

So there were 2 deaths from fireworks in 2009 and 8800 injuries in the U.S. I remind my readers that firearms take the lives of 30,000 Americans every year ( including 8 children a day) and another 70,000 injuries costing the country billions of dollars. And yet, I needed to produce my driver's license to buy 2 boxes of "Pop Its" today! There is widespread recognition that fireworks and firecrackers can be and are dangerous. Guns? Not so much. I should say that most people understand the dangers of guns but the NRA and its' minions won't allow any common sense laws to pass to prevent deaths and injuries. I also remind my readers that private sellers of firearms are supposed to ask for a driver's license but many do not.  In hidden camera video after hidden camera video, we have the proof that many people buy guns without producing one piece of identification. Here is just one of the latest exposés about how easy it is to buy guns, no questions asked. It's easier to buy a gun than it is to buy fireworks. And fireworks cause a very small number of deaths and injuries to Americans in a given year. Where is common sense?

I wish all of my readers a very good Fourth of July celebration. Stay safe out there. And don't celebrate by shooting your gun into the air. I have a friend, Joe Jaskolka, whose life was forever changed when a bullet from celebratory gunfire landed in his brain while he was celebrating New Year's Eve in 1998 in Philadelphia:

He was 11 years old. Now 24, he is paralyzed on the right side of his body and face and has undergone nearly 55 surgeries to his brain and eyes.

I will be taking a few days away from my blog while spending some family time at our cabin. I know that gun deaths and injuries will not take a vacation and I will have plenty to write about when I post again.