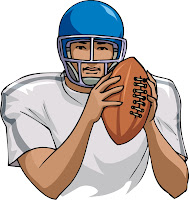 When it comes to shootings and sports figures, the score isn't great. I have written before on this blog about the number of athletes who have been shot, shot themselves or shot someone else. There is a lot of pressure to perform and succeed in sports. Many athletes get involved in doping, or taking drugs and alcohol. Some professional athletes make a lot of money but don't know what to do with their fame and fortune. Some are "used" by their coaches or managers or made to feel inadequate if they have a few bad games or matches. Some are put on pedestals until suddenly they are knocked off. Some have suffered from terrible head injuries leading to mental illness, or brain injuries. Sometimes there are problems with family life due to the life style of the athletes. Physical injuries can end careers suddenly or gradually. Some athletes, like some Americans, have lost loved ones to bullets. Coaches, too, have been affected by gun violence.

As we celebrate our country's origins this fourth of July, we may watch a little baseball or participate in some sort of physical activity or sport. With the Summer Olympics coming at the end of this month, there has been attention paid to some of the athletes getting ready for that great event. America is a country where almost all sports are played. This is a week for Patriotism. Sometimes sports brings out our patriotic spirit as well. We cheer for our own team. We love to watch Americans win events in the Olympic games. Athletes are greatly admired in America. But they are also victims of bullets. This new report from the Brady Center about Guns in Sports sheds a lot of light onto the gun injuries and deaths suffered by athletes, professional and amateur alike. The other very important message in this report is that many, if not most, of the gun deaths and injuries were preventable. In addition, some of the shootings were caused by guns obtained illegally or legally when they shouldn't have been. Easy access to guns around the house has also led to suicide deaths in some of the athletes in the report. From the report:

The sports world is filled with athletes at every level of competition who have been wounded, killed, lost loved ones, or otherwise been victimized by guns – or who have had their lives changed forever by turning to guns themselves. Entire rosters could be filled with star players who have been adversely affected by guns in some way.

Yet the fact that guns killed Sean Taylor, Michael Jordan’s father, Serena and Venus Williams’s sister, and Dallas Green’s nine-year-old granddaughter had nothing to do with their ties to the sports world. They lost their lives because they lived in a country with over 200 million firearms, where inadequate laws make it far too easy for dangerous people to acquire the means to kill. In one decade in America, from 1996 to 2005, there were almost 5 million violent crimes committed with firearms and more than 2 million crime guns recovered and traced by law enforcement.

You can read the entire report which highlights some of the more high profile shootings. There is also a complete listing at the end of the report of the many American athletes and coaches affected by guns and bullets. Since we are so close to the Fourth of July holiday, let's take a look at the article in the report about National Football League star Steve McNair, who was shot to death on July 4, 2009 by his girlfriend:

On the night of July 4th, 2009, McNair was sleeping on his couch in Nashville when his girlfriend, Saleh Kazemi, shot him twice in the head and twice in the chest, killing him instantly. She then turned the gun on herself, committing suicide.

Kazemi was 20, not old enough to buy a handgun legally from a licensed federal firearms dealer (“FFL”), so she would not have passed a Brady background check. But she obtained her gun for $100 through a “private sale” by Adrian Gilliam, Jr., a convicted felon, in a mall parking lot. Gilliam also obtained the gun from the private sale loophole, as he was prohibited from purchasing a gun from a FFL.

Closing the loophole that allows anyone to purchase guns through a private seller could reduce and prevent gun injuries and deaths. We can't do that in the U.S. because the NRA, its' minions, and the gun industry ( who works hand in hand with the NRA) have made it clear that any such effort would inevitably lead to total confiscation of the guns of law abiding citizens. Such nonsense and lies should not be tolerated but many politicians are too timid to stand up for what's right so private sales continue unabated along with senseless and preventable gun deaths of not just athletes, but many other Americans.

There are many other examples of how gun violence has affected sports figures in this report. One more that many remember is Ricky Byrdsong, Northwestern University Basketball Coach, who was shot and killed on July 2, 1999. Today is the anniversary of his death:

On July 2, 1999, Byrdsong was out for a run with two of his children in the Chicago suburb of Skokie, Illinois, when neo-Nazi Benjamin Smith drove past and fired at them, killing Byrdsong. Smith continued his shooting spree for two more days, killing one other and wounding nine.

Smith was prohibited from buying or possessing guns because he was subject to a domestic violence restraining order. Due to this, he was stopped from buying a gun from a licensed gun dealer when he failed the Brady background check. However, Smith was able to obtain guns through the private sale loophole by buying from a gun trafficker named Donald Fiessinger, for which no Brady background check was required or conducted.

Other loopholes enabled Fiessinger to engage in gun trafficking. Because federal law places no limit on the number of guns someone may purchase, Fiessinger bought 72 handguns in under two years from Robert Hayes. Hayes had every reason to suspect that Fiessinger was illegally selling guns without a license, but Hayes had every financial incentive to supply Fiessinger’s illegal business. In turn, Fiessinger armed Smith with two guns bought from Hayes that Smith used to kill Ricky Byrdsong and shoot many others.

Old Prairie Trading Post and Fiessinger were eventually convicted of violating federal gun laws, but only after substantial press attention on the shootings.

Again, we can see how our weak gun laws have led to senseless shootings. When there are no limits to the number of guns people can buy at a time and over a period of time, it is an invitation to trafficking of guns and using them for harm. But never mind, we don't change the laws. We continue to allow this stupid and dangerous abrogation of responsibility because of the NRA's dark version of America. There is no common sense when it comes to gun laws in the U.S.

These are just two of the athletes about whom this Brady Center report writes. The report is not only well written but points out the problems created by our lack of ability to pass sensible gun laws that could save lives. This report points out some of the major problems with U.S gun laws. Below are what was revealed in the report and included in the Brady Campaign/ Center press release about the report: (in addition to the ones mentioned above):
Focusing on sports figures call attention to our national public health and safety problem in a way that resonates with those who care about sports, care about their country and care about keeping athletes and other Americans safe from shootings. We should all care about preventing senseless shootings.
Posted by japete at 1:26 PM