Gun guys getting away with illegal activity 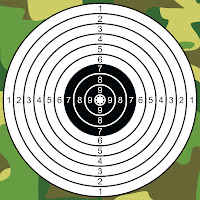 Are law enforcement officers just plain afraid to deal with the gun guys when they do something wrong for fear of being attacked by them? Or why else would this situation in Illinois not end in some sort of charge against the offender? I find this one particularly interesting because it pitted gun owner against gun owner. One gun owner and NRA member who lobbies for conceal and carry at the Illinois Capitol called the offender irresponsible. Yes, it happened. I guess even gun owners can get mad when a bullet from an unregistered "gun range" in a neighbor's yard comes flying into his house. From the article:

"Debra Gaskin said the officer who came out to their three-acre property said there was nothing he could do, that range shooting was legal in some parts of Will County, especially where the houses were far apart. When she persisted, insisting that firing into a person’s home was not legal, he called another officer. Together, the officers went to the neighbor’s house. Bill Gaskin, having returned from work, did the same.

“The homeowner said he always believed that the range was safe,” Hoffmeyer said. “And when he found out why the deputies were there, he was physically upset and concerned.”

Merritt was unable to be reached for comment. He did not have a working phone number listed.

Bill Gaskin said Merritt apologized and offered to pay for the damage caused by one of the 25 or 30 shooters at the target practice event he was hosting that day.

Gaskin said that event was run by DMZ Tactical in Homer Glen. A man named “George,” of DMZ, who would not confirm his last name, says he was at the event but insists he did not run it. He said he also apologized for the wayward shot.

“We do everything possible to keep it safe,” “George” said. “This was an accident.”

Bill Gaskin said his encounter with “George” turned ugly after he asked about the shooting instructor’s credentials.

“George” on Thursday told the SouthtownStar that he’s been teaching people how to shoot since he got out of the Marines in the 1990s. His website describes his mission as “tactical firearm training for the rest of us.” DMZ Tactical has been in business for a couple of years now, “George” said, although it is not registered with the village of Homer Glen nor with the Illinois secretary of state’s office. The address listed on his website leads to a box inside a UPS Store.

He also accused Bill Gaskin of being “anti-gun.”

Bill Gaskin said he is a member of the NRA and Illinois Rifle Association.

“I’m not anti-gun, just anti-irresponsible shooting,” he said. “I lobby in Springfield each year for conceal and carry because I believe in it. I don’t believe in irresponsible gun practices.” (...)

Though Merritt has agreed not to host any more events at this address, Bill Gaskin said he’s concerned for the safety of others.

Curt Paddock, director of the Will County Land Use Department, said shooting is allowed in Will County on property zoned C-6 commercial, according to county ordinances. Paddock said no properties in the area where Gaskin lives appear to be zoned C-6.

He says his office will investigate, if the homeowners file a complaint.

So why didn’t sheriff’s police cite Merritt? Hoffmeyer said deputies found a spent 9 mm round on the floor of the son’s closet.

Sheriff Paul Kaupas said the deputy interviewed the homeowner and the shooting party’s host and everyone cooperated.

“It doesn’t appear there was any criminal intent,” Kaupas said. “The state’s attorney’s office will review the case. It’s not illegal to shoot a gun on your property unless zoned otherwise, but that sanction would come from them (land use) based on our report.”

The police report described the incident as non-criminal damage to property. But according to Sect. 24-1.5 of Illinois’ gun law, reckless discharge of a firearm, which endangers the bodily safety of an individual, is a Class 4 felony.

“I just don’t understand,” Debra Gaskin said. “They could have killed my son.”"

Never mind public safety. Stupid and dangerous all the way around. No felony charges though the law says there should be. What's going on? Why not? Further, who needs "tactical firearm training"? What country do we live in again? Are we at war? We have stray bullets flying around in neighborhoods coming from the law abiding and the not so law abiding. We have children being shot to death by stray bullets. We have a close call where a teen or two could have been shot by a guy who says it's perfectly legal to do what he's doing and saying he was trying to keep it safe. How can shooting guns at targets in your back yard possibly be safe when you have a makeshift gun range too close to homes? As "dog gone" noted in a reply on a recent post on this blog, don't shooters need to follow the bullet they shoot and know where it is going? Don't responsible gun owners know to follow gun safety rules? Why are gun ranges in neighborhoods in the first place? Don't shooters know how far bullets can fly? Where is common sense? This is the version of America the NRA loves. Raise your hand if you think this is a good idea.
Posted by japete at 3:24 PM