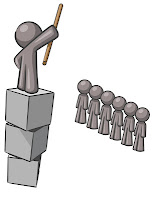 Meet Mike Vanderboegh. He is a thug and a bully. He has inspired violence. He is a militia member who influences an "army" of idiots. Now, the infamous Mike Vanderboegh who started the ridiculous and false circus over Fast and Furious has predicted armed insurrection because the Affordable Health Care act was upheld in the Supreme Court. When the gun guys don't get what they want, they threaten to use their "second amendment remedies." Let's not forget that Vanderbough's advise was taken by idiot memes who actually believed him before when he urged people to throw rocks and bricks through the windows of Democratic Congressional members who voted in favor of the Health Care bill. This man means business. He is a crazy and angry anti-government character who has become a favorite "expert" about gun issues on Fox T.V. Here is a story about that from the linked article:

So, back to his latest nonsensical claim. He is saying the Supreme Court's decision represents tyranny when he himself is calling for the same. Up is down and down is up. This is the dark version of America the NRA and its' minions support. From the Media Matters article:

"The blogger posted the statements, which come from a recent unpublished interview, the same day the House of Representatives voted to find Attorney General Eric Holder in contempt over his unwillingness to release documents related to Fast and Furious.

In the excerpts Vanderboegh posted on his blog "which deal with the decision today," he says of a then-potential decision upholding the health care law, "You may call tyranny a mandate or you may call it a tax, but it still is tyranny and invites the same response." He further predicts the response of his ilk: "If we refuse to obey, we will be fined. If we refuse to pay the fine, we will in time be jailed. If we refuse to report meekly to jail, we will be sent for by armed men. And if we refuse their violent invitation at the doorsteps of our own homes we will be killed -- unless we kill them first. ... I am on record as advocating the right of defensive violence against a tyrannical regime."

Vanderboegh gained fame in 2010 when he urged his readers to respond to the passage of health care reform by breaking the windows of Democratic offices, then took credit after vandals struck several such offices. The Alabama-based blogger has previously been part of the militia and Minuteman movements, and leads the Three Percenters, a group which claims to represent the three percent of gun owners who "who will not disarm, will not compromise and will no longer back up at the passage of the next gun control act" but will instead, "if forced by any would-be oppressor, ... kill in the defense of ourselves and the Constitution.""

Let me get this straight. Vanderboegh wants to defend the Constitution after a bill that passed by a majority vote in the U.S. Congress is upheld as Constitutional by the Supreme Court. Did I get that right? What does Vanderboegh get so wrong? Will there actually be blood over the Supreme Court decision? Time will tell. If there is, we know who to blame. Call me cynical but here is a question from a "reporter" on Vanderboegh's blog:

Question: What are your thoughts about how the Supreme Court will rule on health care Thursday? What do you see as the potential implications of its decision?

See above. If the individual mandate is upheld, me and a few million of my friends will not comply and we will make ourselves so obnoxious in our refusal that sooner or later some government agent is going to try to kill us. Because the one thing a tyrant cannot tolerate is the example of someone being unafraid and saying "No." It's a bad example for the rest of the sheep and might encourage noncompliance. When that happens, you have only to read history to predict the outcome. To believe anything else is to whistle past the graveyard of history.

A few million of his friends? Raise your hand if you are a friend of this man and agree with what he has written. I want to know if any of my readers are a part of this dangerous agenda. This is not only stupid and dangerous, it is cynical, paranoid, ludicrous and downright egregious. Let's hope that common sense wins out and nothing happens to any Supreme Court Justices or elected officials. Vanderboegh will have some explaining to do.
Posted by japete at 3:31 PM