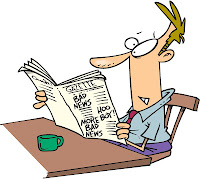 What in the world is going on? I decided to check the local news updates of my newspaper and here were the news headlines:

And then there were a few other articles of interest. This one, "Protect-the-Castle Laws and Homicide"points out the obvious:

We find no evidence that castle doctrine law deters crime…. Furthermore, our estimates are sufficiently precise as to rule out moderate-sized deterrence effects. Thus, while our view is that it is a priori reasonable to expect that strengthening self-defense law would deter crime, we find this is not the case. We find suggestive but inconclusive evidence that these laws increase justifiable homicide by private citizens. However, the absolute impact of even the largest and most statistically significant estimates is quite small, given how few homicides are classified in this way. Our estimates suggest the laws cause at most 50 additional justifiable homicides per year across all 23 states that adopted castle doctrine.

Wow- even though some of these "self defense" shootings are killings of criminals, the laws have made it more possible to shoot another human being and whether or not all of those "criminals" should have been killed for their crimes is the question. Shooting to kill is a very serious matter. Gradually, since the laws have been passed in states all over the country, it has become easier to take lives. This is all a part of the NRA's dark version of America. We are not seeing fewer shootings, injuries and deaths. Rather, we are seeing more. More guns in more places carried by more people is most definitely not making us safer. To believe in that is stupid, dangerous, insane an delusional. To continue to read the headlines like the ones I posted above is ridiculous. The public is becoming numb to news about shootings instead of getting angry and demanding change. When the news is so grim, it's easy to ignore. Maybe the NRA is also hoping for that. At what point will enough be enough? Maybe when enough people are affected by the violence? Maybe when our elected leaders finally get some common sense and start standing up for victims and what's right instead of sitting down with the gun lobby. Unfortunately there are a lot more headlines than the ones I chose and there will be a lot more coming. Time will tell but people are dying and being injured while we are waiting.

I am compelled to update this post with this article about the hearing in Florida yesterday concerning the controversial Stand Your Ground law. The hearing was prompted by the shooting of Trayvon Martin and invited people could testify before the panel. From the article:

Joellen Standard was tucking her kids into bed when she heard three pops outside her Crystal River home. She ran downstairs and found her husband at the end of the driveway, holes in his head and side, their neighbor standing over him.

When the man who shot Scott Standard dead claimed self-defense, Joellen couldn't believe what she was hearing. She had called the police on their neighbors 20 times before that night, she says. There was a paper trail of bad blood.

But no charges came and the days clicked by and, on Tuesday, after a year and four months without any kind of justice, she drove across the state, stepped to a microphone in a megachurch here, television cameras rolling, and told her story to the world.

"They were never charged because they said they were in fear for their lives," she told a 19-member panel tasked by the governor to reconsider the state's 2005 expansion of self-defense protection. "The 'stand your ground' law shouldn't apply."

And why again did we need Stand Your Ground laws? They have become license to kill laws and justice is not being served. With the case highlighted above, and more, don't we have enough evidence to show that these laws are a bad idea? I encourage my readers to read the comments from law enforcement:

Palm Beach County Circuit Judge Krista Marx, who sits on the panel, said the state "significantly expanded" the self-defense law when it removed the duty to retreat. In Florida, a person has the right to stand his ground if he reasonably believes it is necessary to do so to prevent death or great bodily harm, is not engaged in an unlawful activity and is attacked in any place where he or she has a right to be.

"This is a tremendous change in the law," Marx said.

She also pointed out that the courts have not defined the exact scope of "unlawful activity" and suggested the task force address that. Does unlawful activity include double parking? Does it mean someone with marijuana in his pocket, or a vagrant in a park after dark, may not be granted immunity from prosecution if he defends himself with deadly force? Should "stand your ground" protect someone with an active warrant, or an illegal immigrant?

These laws passed "under the radar" of most citizens. Now that they have, there have been too many victims and it's too late for them. But maybe by testifying and letting others hear their stories, something will be done to change or repeal these dangerous laws.

Today in the MInneapolis area, a construction worker was struck by 2 bullets while working:


Based on X-rays taken at Fairview Southdale Hospital in Edina, the worker was most likely hit by "a metal or lead bullet" twice while directing traffic in a closed lane near Hwy. 110 and Lexington Avenue, Roeske said.

What the heck? Can't people even go to work in the morning without worrying about stray bullets? As I have said before, "the chickens are coming home to roost." The dark version of the NRA's agenda is beginning to show itself in plain view. Too many people have too many loaded guns in too many public areas. It is touted by the NRA as a way to protect oneself. Instead, innocent people are being shot in communities all over our country.
Posted by japete at 10:58 AM

Email ThisBlogThis!Share to TwitterShare to FacebookShare to Pinterest
vention, Open Carry, Castle Doctrine, guns for self defense, NRA, shootings in the news, Stand Your Ground laws