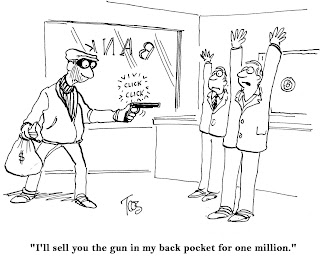 In my last post, I wrote about the fact that the more people carrying more loaded guns in more public places is causing senseless gun deaths. Some of my readers, of course, don't believe me and actually attacked me for writing about cases like this. They are sure they are right in needing their guns everywhere they go because they will surely be able to act in "self defense" if need be or to even "save the day" if they have to. This article about an incident in Texas shows the danger of permit holders thinking they can shoot it out with criminals with guns and win. From the article:

"Houston Police confirm it was a customer with a concealed handgun license who accidentally shot and killed a store clerk.  The CHL holder was trying to protect Tyrza Smith, 26, from armed robbers, but something went terribly wrong and she was killed.

It happened on May 17 at the Family Dollar located at 6951 Bellfort in southeast Houston.

Police say Dwight Richardson, 20, and another man who hasn't been arrested are accused of bursting into the store, locking the front door and holding a gun to the clerk's head.

"They come in, they got guns out and they're threatening people in there.  The CHL holder had every right to defend himself and that clerk," said Fox 26 legal analyst Chris Tritico.

The customer tried to leave but noticed the door was locked.

He pulled out his weapon and got in a gunfight with the robbers.  Smith was caught in the crossfire, and ballistics tests show the CHL holder killed her."

And then, the obvious question is asked in the article:


Should the customer have pulled his weapon, especially since most robbers are happy just getting the cash?

Kyle Dekay learned in his CHL class to turn and run unless there's an immediate threat to life.

"If at all possible, if there's a small opening, get out of there.  Hightail it.  The last thing you should ever do is go and draw for your weapon," he said.

Gun dealer Jim Pruett can't say for sure what he would have done.

"It's a tough one, and every situation demands a different reaction," Pruett said.

Each year there are thousands of cases of gun owners successfully defending themselves.  Tritico says it will likely be up to a grand jury to decide whether the CHL holder was justified in shooting his gun.

"That's what we have to look at.  What was this person thinking?  What was he feeling?  What were the circumstances at the time he pulled his weapon out?"

The CHL holder could still be sued in civil court even if the deadly force is found to be justified.

Trigger happy gun rights enthusiasts with guns at the ready may lose all common sense when it comes to a situation like the one above. The right question was asked. Did the man need to shoot the burglars? They could have robbed the store and walked away with no one being killed. That is usually what they want. Let's look again at what the gun permit class instructor said in the article: ""If at all possible, if there's a small opening, get out of there.  Hightail it.  The last thing you should ever do is go and draw for your weapon,..."". Sounds like good advice to me. Now the permit holder is in some trouble. Perhaps he should take out the NRA insurance policy I wrote about yesterday. More guns in more places do not make us safer. The NRA's dark version of America makes situations like this more likely and this will not be the end of such shootings, unfortunately. Law abiding people with guns are quite capable of doing stupid and dangerous things with their guns and it's happening with increasing frequency. It's time to do something about this.