Shoot someone in a restaurant or bar? No problem. Get NRA insurance. 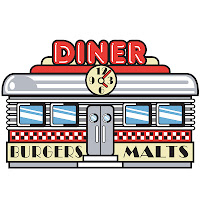 There are too many loaded guns carried by too many people who shouldn't have them into too many public places. This tendency, which came about as a result of the passage of conceal and carry laws in almost every state, has led to a dark version of America espoused by the NRA. That version is that loaded guns should be everywhere where people go in their daily lives. And I don't just mean guns in hands of criminals. I am talking about legal gun permit holders. Take restaurants and bars for example. This North Carolina blog writer wants to know how many shootings there have been by "law abiding" gun permit holders at restaurants and bars.

"So the question becomes how increasing public exposure to CCW permit holders in restaurants (including those that serve alcohol) will reduce the risk to citizens from a segment of CCW permit holders that have been shown to be less than responsible and capable of engaging in acts of violence.  Logic would dictate that expanding public exposure could only increase the risk of firearm discharge in public settings, and that attempts to intervene with guns can create substantial collateral damage.  Additionally, it is difficult to imagine an off-setting benefit that could justify this already established loss of citizen life by some permit holders.

These findings and concerns were summarized and sent to the NC bill sponsor with copy to leadership in both parties in both houses asking that full consideration be given should the bill find its way to the senate floor.

A couple of things are clear however.  First, stating that there have been ‘no problems’ with concealed carry at restaurants and bars needs to cease; it simply is not true.  Second, use of the term ‘law abiding citizen’ to defend the carrying of concealed weapons should not be applied to the entirety of the concealed carry population."

This North Carolina blog writer, Dr. Art Kamm, found that there have been a number of shootings in restaurants and bars by law abiding gun owners, the most recent of which is the shooting in Seattle a few weeks ago at a popular eating establishment by Ian Stawicki, legal gun permit holder. Clearly that shooter should not have had a permit to carry but he did anyway.  Let's review this one again in case you forgot:

This time it was 40-year-old Ian Stawicki, who entered a Seattle cafe on Wednesday and opened fire, killing four people. He then left Cafe Racer, killing another person during a carjacking before taking his own life.

The pro-gun reaction to this most recent slaughter by a concealed handgun permit holder? That's life.

"I don't know that there's anything you can do in these situations. We can't treat him like a child, he's got his own life to live and he can make his own mistakes no matter how horrific those mistakes turn out to be."

"Those mistakes" happen all too often. According to a running tally maintained by my organization, the Violence Policy Center, since May 2007, nearly 450 people have been killed in 334 non-self defense incidents by private citizens legally allowed to carry concealed handguns.

Mistakes? Is he kidding? These are human lives. The taking of a life should not be a casual mistake. Shootings like this are senseless and preventable. We are doing nothing to stop them because the NRA has way too much influence on the gun laws in our country. We shouldn't believe them. They are mistaken. There are many more incidents where this one came from. I came across other articles about shootings in just the Seattle area alone in or near bars or restaurants. They are here, here and here. And so why, again, are guns necessary to defend oneself from a shooter inside or near a restaurant or bar? Some of these shooters were law abiding gun permit holders, and not criminals. At least one (Stawicki)  had mental illness and his family was worried about him but Washington state law didn't allow law enforcement to take away his permit or his guns. God forbid that guns and permits are taken from anyone. And so, we have senseless shootings in public places carried out by people who either shouldn't have guns and permits in the first place or who shouldn't have them at a moment of anger or under the influence of alcohol. And then, of course, there are the accidental discharges of loaded guns, referred to by me many times on this blog. This latest and embarrassing accidental discharge by a Michigan permit holder is an example of how carrying loaded guns can go very wrong. There are more where those came from. Now these are mistakes that should never happen. But happen they do.

And not surprisingly, North Carolina gun rights activists are angry that the proposal to allow guns in bars and restaurants may just die during this legislative session. These folks must think so many people are being shot by criminals in restaurants and bars that law abiding folks just must have guns to defend themselves. From this article:

"Do we have to wait until more die, Sen. Berger?" wrote Valone. "Will your legacy be that Republicans turned their backs on slain restaurant workers due to fear of bad press? I urge you to pull HB 111 from the Finance Committee and send it to the floor for an immediate vote."

This is exactly what the NRA wants. They pushed for the passage of conceal and carry laws. Once they got them passed, they have not been satisfied. Another market for guns must be created. So if guns are allowed in more places, more people will think they need them. And that will lead to more people buying more guns. The NRA has also tried to convince the public and politicians that law abiding gun owners could do no wrong. Just trust these "law abiding" people who are until suddenly they aren't. And on the off chance they might be in a place where either an actual criminal might show up with a gun or say, maybe, another law abiding gun owner who has flipped out or hates his spouse and decides to end it all with a bullet, they will be right there to take care of business. Somehow it just hasn't turned out as predicted. Have there been shootings by criminals in bars and restaurants? What are gun activists talking about? Is anyone turning their back on all of those slain restaurant workers? Really? Are there a lot of slain restaurant workers? Sounds like hyperbole to me. Of course, there are some. There are shootings in every public and private place in America. The answer is not to introduce more loaded guns into more and more places. Prevention is possible. Given the gun culture in America, it is not probable.

And, by the way, there is a good deal for you gun nuts out there. In case you shoot someone in a bar or restaurant in claimed self defense, the NRA will be right there to help you with your legal fees. No worries. The NRA is offering insurance for self defense shootings just in case you decide to fire off your gun in a restaurant or bar and need to be protected from a law suit. From the article:

The insurance, which is administered by Lockton Affinity exclusively for NRA members, is available as a rider to their “excess personal liability” plan.

According to Lockton Affinity's web site locktonrisk.com, here is what is covered:

• Provides coverage up to the limit selected for criminal and civil defense costs.

• Cost of civil suit defense is provided in addition to the limit of liability for bodily injury and property damage.

• Criminal Defense Reimbursement is provided for alleged criminal actions involving self-defense when you are acquitted of such criminal charges or the charges are dropped.

Cheap insurance for sure. One can never be too careful. And what a great deal for the NRA. They are taking advantage of stupid and dangerous permit holders who have been convinced that they can shoot someone in self defense even if they shouldn't. Why not? Follow the money. Follow the paranoia. It leads directly to the NRA.

In the linked article above is a great cartoon exposing this nonsensical insurance plan. Here it is: From mattbors.com: 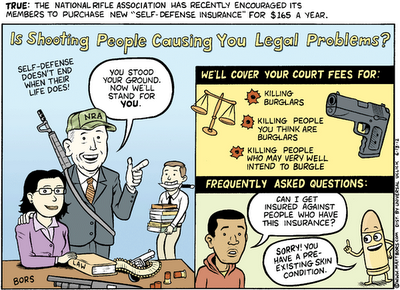 Cartoonist Matt Bors has it just right. Where is common sense?