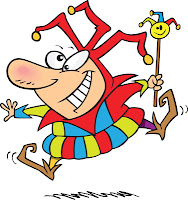 Today I simply must report on several fools in the news. These are gun rights folks who are not only foolish but stupid and dangerous. First is the now infamous, "Joe the Plumber" made famous in the 2008 election when he asked a question of then candidate Barack Obama and inexplicably ended up as a hero of the far right ( thanks in part to Sarah Palin, VP candidate). Joe Wurzelbacher is now running for a Congressional seat in Ohio. He has a theory about how the holocaust came about. From the article:

Mr. Wurzelbacher’s video features footage of him on a shooting rage blasting fruits and vegetables with a shotgun. As the clip draws to a close, Mr. Wurzelbacher, gun in hand, proclaims, “I love America.”

The description of the video describes gun ownership as “our last line of defense” from tyranny and poses a rather existential question about Mr. Wurzelbacher’s produce shooting hobby.

“If you hunt or just like shooting guns, the 2nd Amendment will always be a good thing. History also tells us it’s our last line of defense in the face of an out-of-control government,” the description says. “And killing fruits and vegetables is… what?”"

Wurzelbacher told POLITICO he has no sympathy for those who might be offended by his message.

“If people are looking to be offended by this video, they are probably serving a political agenda. Unfortunately there are a lot of whiners out there,” the Ohio Republican said in an interview. “The Second Amendment essentially allows us Americans to make sure that we keep our rights. It’s very important to make sure we sustain it.”

Right. It doesn't matter to these fools if they offend someone. They have no empathy or sympathy. Do they care at all about victims? Do they care that the laws they push result in senseless gun deaths? And further, who has the political agenda? It couldn't possibly be Joe himself could it? Joe is espousing the tired old unproven and ridiculous NRA theories about the Nazis and the Holocaust. He is also espousing the NRA's theories about "second amendment remedies" for dealing with their very own government in an insurrection. I will be writing more about this soon.

Second in line for fool of the week is this Florida drug dealer who is using the Stand Your Ground law to get away with murder. ( I wonder if he bought the NRA insurance!!)

Tavarious China Smith was not particularly lucky. A small-time drug dealer in Manatee County, Smith sold crack and marijuana not once, not twice, but three times to undercover cops.

But in one respect, Smith, 29, hit the jackpot.

On two occasions, more than two years apart, he committed homicides but was not charged thanks to provisions of Florida's "stand your ground" law. Smith claimed self-defense in both cases and prosecutors agreed. He never faced a judge or jury for fatally shooting Nikita Williams, 18, in February 2008 in a drug-related incident or Breon Mitchell, Williams' 23-year-old half-brother, in December 2010.

Smith's only punishment stemmed from using a gun to kill Mitchell. Since he was by then a felon, convicted on drug charges, Smith wasn't allowed to carry the Ruger .357 Magnum he used to shoot Mitchell outside a Palmetto nightclub in 2010. In January, a federal judge in Tampa sent Smith to prison after he pleaded guilty to being a felon in possession of a firearm.

The state's expanded self-defense laws have come under scrutiny since the fatal shooting in February in Sanford of Trayvon Martin by George Zimmerman, a neighborhood watch volunteer. A task force appointed by the governor is reviewing whether the 2005 law is being applied correctly.

Prosecutors say it has too often been used to protect gang members and drug dealers in shoot-outs. Although it does not apply if the defendant is committing a crime, the law does not define criminal activity and courts have differed on their interpretations of the statute. As a Times database of nearly 200 "stand your ground" cases shows, simply being a felon in possession of a gun or a drug dealer has not prevented defendants from successfully invoking the law.

Arthur Brown is the assistant state attorney in Manatee County who reviewed both of Smith's homicides and declined to prosecute Smith in the Mitchell case. He said both were clear-cut cases of self-defense and that provisions of the "stand your ground" law only strengthened Smith's claims.

"I agree this was probably not the class of people lawmakers were trying to protect when they wrote this law," Brown said. "But the law provides a larger umbrella than simply the home­owner that's protecting his house."

Who is the actual fool here? The politicians who fell for the NRA's agenda. The public who didn't realize they had been fooled by the NRA. The Smith case is an egregious example of why Stand Your Ground laws should be repealed or seriously changed. More from the article:

"Although Smith was shot at initially, he did take possession of a firearm and 'chase' Breon (Mitchell) so that he could shoot him," the police report said. "Chasing a subject in order to shoot and kill them goes beyond defending one's self."

But less than a month later, the State Attorney's Office dropped the murder charges against Smith. The prosecutor said the state was unable to disprove that Smith had acted in self-defense.

"There's no question that Smith was shot at first, that his ride had taken off so his most likely means of escape was gone and that the pistol Breon was firing at him has 10 rounds," Brown said of the gunfight, which took less than a minute. "A reasonable person could see that danger was still present when he (Smith) was firing back."

Brown said the victim's family was understandably upset by the state's decision.

"As I recall the family was aggrieved," Brown said of the victim, who had served time in state prison for cocaine possession and carrying a concealed weapon. "But there was no dispute that Mitchell had initiated the aggression."

Dee White, maternal grandmother to Smith's victims, said of the incidents: "I do not know what happened because I was not there, but in the end, God will take care of it."

One of the above lines bears repeating: "But less than a month later, the State Attorney's Office dropped the murder charges against Smith. The prosecutor said the state was unable to disprove that Smith had acted in self-defense." Are these really the people we want using self defense as a "get out of jail free card"? NO. This is the result of the NRA's dark version of America. Gang members and drug dealers can use Stand Your Ground laws to defend themselves for murdering someone. This was the very criticism of the gun violence prevention community when these laws were heard in the states where they passed ( or didn't). But never mind the facts. The NRA and its' minions have a dangerous mission. They don't care if criminals carry guns or even get away with murder as long as they, themselves, can do the same. Where is common sense?


I would like to add this link to the NRA's circus of fear to my list of fools. Please watch it here. NRA's Executive VP Wayne La Pierre knows how to whip up a crowd full of fools.