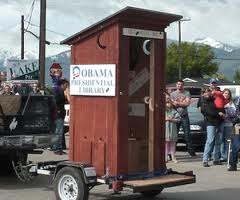 Yesterday I posted about the attacks on the rights of women, voters, health care and reproductive rights. These exemplify how far the right has gone and will go to take down our nation's first Black President. It is unseemly and gutter politics. Many agree with me. Dana Milbank of the Washington Post has written this post today about how low things have become. From the article:

"Under the Obama presidency, however, conservative leaders are encouraging the vulgarity — if not joining in by heckling the president from the House floor. The Republican Party’s presumptive presidential nominee, Mitt Romney, recently shared a stage with Donald Trump only hours after the buffoon tycoon had again floated the disproved allegation that Obama wasn’t born in the United States. Among many such episodes before that, Romney failed to challenge a supporter who suggested to him that Obama “should be tried for treason.”

Conservative leaders may believe it benefits them that one in six voters still thinks Obama is Muslim. But when conservatives sanction the debasement of Obama, they are debasing the presidency itself. A Gallup poll last year found that only 35 percent of Americans had confidence in the presidency. A Harris poll last month found that only 22 percent of Americans have a high degree of confidence in the White House."

Milbank also refers to the photo of the outhouse sitting outside of the recent Montana Republican convention with slurs against both President Obama and his wife, Michelle. From this article:

The outhouse with the name "Obama Presidential Library" displayed outside the state Republican Convention in Missoula this weekend, is drawing fire from across the country. But its builder said it's a political "spoof."

The outhouse has provoked debate crossing all party lines. A Florence man built it, and before the convention, had it displayed at the Memorial Day Parade in Corvallis.

It's a mobile political statement sparking a lot of emotion. Dave Hurtt said he built the outhouse as a statement against Obama's policies. Outside are fake bullet holes.

Inside, is a mockup of Barack Obama's birth certificate. There's also a sign that said, "For a good time,"...then the names Michelle Obama, Hillary Clinton and Nancy Pelosi.

"It's just a spoof," said Hurtt," a joke, maybe my humor is a bit crude for some people."

This is not just a spoof. It is not humorous. It is unwarranted, evil, vitriolic and below the belt attack on our nation's President. The man who created the outhouse is unrepentant. Shame on him. He and others like him don't seem to care. Anything goes with these folks. You can see the photo above. This photo is a prime example of the debasing of the President and the presidency referred to by Dana Milbank. It should not be tolerated but the right thinks anything goes. And it fits right in with the NRA's dark version of America.

And the right and mainstream media are complicit in allowing California Congressman Darrell Issa's past sleazy criminal record to go unnoticed and unreported as he has launched a vicious attack on Attorney General Eric Holder. This article from Media Matters spells out the interesting truth about Issa. From the article:


Rep. Darrell Issa's past includes arrests for weapons charges and auto theft, suspicions of arson, and accusations of intimidation with a gun, but you'd hardly know it from the media's recent coverage of the new chairman of the House Oversight and Government Reform Committee. While Issa was substantially mentioned in 15 articles in the nation's largest newspapers since the last election -- including several major profiles -- only one of those articles mentioned any of these allegations. Likewise, interviewers did not ask Issa about his alleged criminal past in any of the cable or network interviews he sat for during that period.


1982: Issa Suspected, But Never Charged, In Arson Incident At Manufacturing Plant. According to the Los Angeles Times: "A suspected arson fire ripped through [Issa's Ohio] manufacturing plant in 1982. No one was ever charged in the fire, but authorities were troubled by a dramatic escalation in the facility's fire insurance just weeks earlier. Even before the blaze was put out, investigators began peppering Issa and his partner with 'crazy questions' regarding their whereabouts before the fire, Issa recalled." [Los Angeles Times, 5/23/98, via Nexis, emphasis added] (...) Former AC Custom Executive Claimed Issa Intimidated Him With A Gun. According to the Los Angeles Times: "One of Issa's first tasks as the new boss [of AC Custom] was to remove an executive named Jack Frantz. According to Frantz, Issa came into his office, placed a small box on the desk and opened it. Inside, he said, was a gun." [Los Angeles Times, 5/23/98, via Nexis]

And if that isn't enough, there's more:

1972: Issa Was Arrested For Auto Theft. According to the New York Times: "In 1972, [Darrell Issa] and his brother William were arrested in the theft of a Maserati from a Cleveland car dealership." [New York Times, 7/23/03]

1972: Issa Also Charged With "Carrying A Concealed Weapon." According to the San Francisco Chronicle: "Court records...show that in March 1972, one month after getting out of the Army, Issa was arrested on charges of carrying a concealed weapon and auto theft. The court file doesn't indicate the type of weapon involved." [San Francisco Chronicle, 7/2/03]

So, where is common sense when you need it the most? If the media fails to report on the fact that a U.S. Congressman has been arrested and charged with many criminal counts in his past and then sits in judgement of the nation's Attorney General in an effort to take him down along with the U.S. President, we have a problem.