There will be a lot of "heat" in Tampa for the Republican Convention. 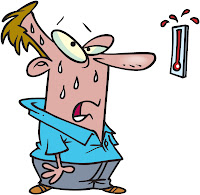 Everyone knows how hot it can be in Florida in August. This August will most likely be no exception. There is not only heat, but excessive humidity making being outside an uncomfortable experience. My family actually took a trip to Florida in August. I remember the ocean water being as warm as a bath tub and having trouble cooling off. Being from Minnesota, heat and humidity like that in Florida in the late summer is hard to take. It can make people irritable. So for Republican convention delegates and visitors who will gather this late August in Tampa, the heat could affect their visit. Of course, the Tampa convention center will be air conditioned so people inside will be cool. How about outside on the streets where the expected crowds of onlookers and protesters will gather? It will be a bit more heated for them.

How much heat will folks be packing while in Tampa in August? As it turns out, in a ridiculous and potentially dangerous decision by Florida Governor Rick Scott, packing heat seems like a good idea in spite of a request by the Mayor of Tampa to suspend Florida gun law for the convention to prohibit gun carrying in the city during the convention. But Governor Scott refused. After all, carrying a loaded gun around on the streets of Tampa should be just the ticket to keep you safe from all of those other people packing heat on the streets of Tampa. If there's a protester who gets in your face, just shoot him/her. Remember that you can claim self defense and get away with it in Florida, thanks to the Stand Your Ground law much in the news after George Zimmerman shot Trayvon Martin. If things heat up outside of the convention center, it is not far fetched to imagine someone packing heat in the heat taking matters into their own hands. No one, of course, will be drinking alcohol while at the convention!! Oh, er, I guess maybe that's not right. But guns and alcohol don't mix so well. From the linked article above:

Mayor Buckhorn argues that, "... in the potentially contentious environment surrounding the RNC, a firearm unnecessarily increases the threat of imminent harm and injury to the residents and visitors of the city." To which most citizens, borrowing a teen expression that really nails it, would understandably say something like, "DUH!"

Florida law bars anyone with a concealed weapons permit from bringing their guns into certain places where "a firearm would not be needed for self-defense, but instead (would) create an unnecessary threat of injury and harm to innocent bystanders." Those places include athletic events, polling places and meetings of the Legislature.

Under that definition, it seems clear that the convention qualifies as just such a place where guns should be banned.

No one attending the three-day event, neither conventioneer and party loyalist nor earnest and determined protester, should need to pack heat for self-defense. Rather, the presence of weapons could create a tinder box environment ready to explode into a Wild West shootout.

Anyone who doubts the potential for violence at a national political convention need only look back to the infamous 1968 Democratic convention in Chicago, which exploded with protester violence and was later described as a "police riot." Imagine how much worse the toll from that mayhem might have been if even one of the participants was "packing."

Officials in North Carolina are facing some of the same issues for the Democratic convention in Charlotte.

North Carolina state law is not quite as permissive of guns as Florida law. Guns cannot be carried at a demonstration or a parade in North Carolina, but are allowed if there is no demonstration, officials said.

The Charlotte City Council in January passed an ordinance allowing it to ban dozens of items that could be used as weapons during the convention.

"We will continue to evaluate every option to ensure a safe environment for our residents, demonstrators and everyone attending the convention," Charlotte Mayor Anthony Foxx said through a spokesman."


Check out this great video of MSNBC's Melissa Harris-Perry mocking the idea of allowing guns outside of the Republican National Convention in Tampa:

So, I have a question. Why does anyone think they need a loaded gun while attending the conventions?What is there to fear? Do they expect confrontations? What message is this sending to the country and the world? - and especially if the worst happens and someone actually uses their gun. And the worst part of this is that even squirt guns are prohibited during the convention. Maybe someone would use a squirt gun to cool down a speaker who gets too heated or speaks for too long.

It turns out that people can be fined for carrying all sorts of things while in Tampa for the Republican convention. Light bulbs? Seriously? Seriously. Check out this article:


If the party's gun logic will be subverted in the convention hall, at least it will reign supreme in the rest of Tampa, where a temporary ordinance will be in effect. Concerned about a "potentially contentious environment" in the city, Mayor Bob Buckhorn has banned a number of  items during convention week. They include: metal knuckles, mace, paintball rifles, hard plastic that is more than ¾ inch thick, wood that is more than ¼ inch thick and aerosol cans. In the area around the convention defined as the "event zone," glass bottles, light bulbs and locks that are not attached to a bicycle will be forbidden. As will pieces of rope more than 6 inches long as well as sticks, poles or water guns.

Yup. These things are definitely more dangerous than guns- if you live in gun world. And besides, they are not protected by the Second Amendment. That is the logic used by NRA supporter Florida Governor Rick Scott who said this:


As Scott pointed out in his reply, sticks, poles and water guns are not protected by the Second Amendment. Guns are. You can't argue with his logic.

Or can you? There is no logic when it comes to the gun rights community. It is usually their way or the highway. To them gun rights are so much more important than public safety and the safety of delegates, candidates, politicians, and tourists. This is how far the country has gone to appease the gun rights extremists. And remember the recent NRA convention where the major Republican Presidential candidates pandered to the attendees? Remember presumptive nominee Mitt Romney and his wife Ann, pandering to the NRA? No, let me remind you:

Romney sought to dispel any lingering concerns about his support for some gun-control laws as Massachusetts governor during his address to the NRA on Friday. He described President Obama and his potential Supreme Court picks as threats to gun owners' rights, which he vowed to protect.

"This organization is sometimes called a single-issue group," Romney said, "and that is high praise when the single issue you're fighting for is freedom."

But Romney devoted relatively little time during his remarks to gun issues, instead hammering away at Obama for his handling of the economy.

Trotting out the "freedom" card is always a good idea because NRA members have none of it, right? And then remember NRA Board member Ted Nugent's offensive and outrageous remarks at the convention? Remember that Mitt Romney was endorsed by Ted Nugent? Remember that he has not denounced this offensive man yet? Why not? This is the cozy relationship the NRA has with the Republican party. The NRA mostly endorses Republicans and donates mostly to Republicans at election time:


Instead, the typical NRA endorsee is a Republican incumbent from a strongly conservative district strolling to an easy victory. Over these four elections, 82 percent of NRA endorsees won their races by 10 points or more, and 62 percent won their races by 20 points or more. In other words, the NRA endorsement is mostly a reward for past service. In fact, in these four elections, the NRA endorsed a total of 106 House candidates who ran unopposed, and even donated money to 96 candidates with no opponent.

So how could Republican Governor Rick Scott stand up to the very folks who helped get him elected? How could he stand up to the gun rights extremists who control many in the Republican party? Don't anger them. They have the guns. They have the influence. They will be packing heat. It will be hot in Tampa. It could be dangerous in Tampa. Common sense will not be much in evidence in Tampa.

It never ceases to amaze me that the violent rhetoric coming from the far right extremists is not denounced by those in charge. So will Mitt Romney and the national Republican Party leadership denounce these threatening comments from a Virginia GOP group newsletter?:

A monthly newsletter published by the Greene County Republican Committee in Virginia is raising eyebrows for including a column in its March edition that calls for an "armed revolution" if President Barack Obama is elected to a second term in November.

Among articles denouncing a University of Virginia initiative to implement a living wage for employees of the institution, questioning if Obama is "America’s Most Biblically-Hostile U. S. President?" and an op-ed slamming the GOP establishment with generous use of capital letters, RightWingWatch picks out a column from the newsletter's editor, Ponch McPhee.

In it, McPhee urges readers to encourage other conservatives to vote in November. He goes on to warn that the consequences of not defeating Obama, a so-called "ideologue unlike anything world history has ever witnessed or recognized," would be dire.

"[W]e shall not have any coarse [sic] but armed revolution should we fail with the power of the vote in November," McPhee writes. "This Republic cannot survive for 4 more years underneath this political socialist ideologue."

A disclaimer at the bottom of the publication apparently attempts to account for this type of rhetoric, noting that the contributors do "not reflect the opinion of the Republican Party whole or in part" and are only representative of the "individual" -- in this case, the editor himself.

Right. Or does this reflect the thinking of the Republican party? If so, packing heat in Tampa is becoming a worse idea as time goes on.
Posted by japete at 7:04 AM