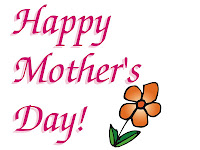 Happy Mother's Day to all mothers out there. This has become the iconic day to send cards, buy flowers, make breakfast in bed, take our mothers somewhere special for a meal and all of those other things people do to remember their mothers. Some mothers won't be getting their cards this year. Mothers all over the world have lost sons and daughters to disease, to accidents, to suicide, homicide, injuries suffered in battle, etc. Every day in America 8 children a day from gun injuries. That makes 8 mothers a day times 365 who won't be remembered by their children today. My mother is no longer alive so I won't be buying a card for her. My daughter and daughter-in-law are wonderful mothers and will be appreciated on this day. They are doing a great job of mothering in spite of the every day stresses of being busy moms.

Trayvon Martin's mother, Sybrina Fulton, is wanting us to remember the pain that mothers all over the country feel on days like this. Here is the video of her statement:

In the year 2000, 750, 000 mothers and others gathered on the Washington Mall on Mother's Day to remember lost loved ones and to demand more sensible gun laws that could prevent this senseless loss of life. We have gone backwards, in fact, since the Million Mom March in 2000 thanks in most part to the NRA and their version of the country where just about anyone should carry a gun around everywhere they go. Laws to prevent felons, dangerously mentally ill people, terrorists, domestic abusers and others who should not have guns get shoved to the background where they sit for fear of bringing up the issue of guns in our heated and political environment. Instead of trying to prevent people who would be dangerous with guns from getting them, we have chosen not to talk about the issue. Instead of keeping guns out of public places where they shouldn't be like schools, churches, bars, restaurants, etc, laws have been passed or introduced to make sure there are loaded guns wherever we gather in our communities. Instead of keeping guns and high capacity magazines from shooters like Jared Loughner (who unloaded his 32 round ammunition magazine in Tucson in January of 2011, killing 6 and injuring a sitting U.S. Congresswoman Gabrielle Giffords and others), we have chosen to ignore this risk to public safety. We have decided, apparently, that limiting deaths to fewer people in a mass shooting is not a good idea while what we should be talking about is preventing deaths in the first place by keeping people like Jared Loughner from getting his gun. Instead of keeping people like George Zimmerman, who shot Trayvon Martin, from carrying his loaded gun around in public, we have ignored his potential risk to public safety. Instead of making sure our laws do not encourage people with guns to shoot others when they claim self defense, we have made sure Stand Your Ground laws allow for immunity from legal responsibility in questionable claims of self defense. Guns can be in public but talking about gun safety and gun violence prevention- not so much.

Here's a plea to mothers everywhere. If you want to do something about gun violence prevention, get involved. If you want to make sure your children are safe in public places and even in places where they play and hang out with friends, join in the efforts of the Brady Campaign to Prevent Gun Violence and other organizations such as the Children's Defense Fund,  CPYV ( Center to Prevent Youth Violence) and many others asking for common sense gun legislation and safer communities. Blogs such as Kid Shootings point out the dangers and risks of guns around children and in the home. If families don't believe their children won't get access to guns in the home or a vehicle where parents have them for self defense, reading this blog will change minds quickly. The latest entry on the blog is about a one year who shot his three year old brother with a gun found in the parents' truck. This is tragic and senseless and pretty unbelievable. Check out the statement made by the father after the shooting:


12 News HD spoke with the childs' father who says "We have spent our entire lives trying to protect our children. In a split second, everything we worked for was in danger, including our childs' lives."

I would suggest that leaving loaded guns around in places where children can find them is not protecting children. It is the opposite, in fact. Guns are dangerous. Guns in the hands of children are dangerous. Irresponsible gun owners who leave loaded guns around where things like this can happen are also dangerous. The mother of both of these children will not have a very happy mother's day today. Sybrina Fulton will not have a happy mother's day today. Many will remember their lost children this mother's day and wish it were not so. My own mother lost her first born child when my sister was shot to death. There were no more flowers for my mother from her beloved daughter who most often sent beautiful bouquets of them on mother's day to her. My sister's children have no one to send their cards or flowers to on this national day of celebration of mothers.

I will end with this mother's story and a plea to do something about our gun laws.

This story is too common. The mother of 3 year old Terrell Mayes, a Minneapolis resident, is still mourning his senseless death while his shooter is walking free. Mothers of 3 year olds should not have to wonder if their children will be safe from stray bullets in their communities. There are many more stories where these came from. We can and must do better so we don't have to listen to these stories from mothers all over America. Stand with the mothers and others who are asking our leaders for public health and safety instead of the NRA's version of America. Happy Mother's Day.