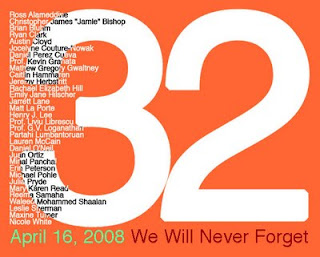 Today is the 5th anniversary of the Virginia Tech shooting. Victims will be gathered in Washington D.C. to commemorate the day and remember the victims. There will be showings of the film, "Living for 32"( documentary made about Colin Goddard, survivor of the Virginia Tech shooting and on the staff of the Brady Campaign) at George Washington University ( and at 32 college campuses around the country) and a panel discussion about the film. The victims will then visit Capitol Hill. Unfortunately, most who have offices in the Capitol or the surrounding buildings want to run away from the victims and are just not interested in touching the gun issue. They are wrong in thinking the issue is too hot or too controversial to touch. If just one stepped forward with the courage required to stand up the NRA, others would follow. The gun issue is a winning issue but the NRA has falsely convinced our leaders that they should be afraid- be very afraid. Be afraid of the victims' families and the survivors. They might remind them of the daily carnage from shootings in America. Why think about that? It's too painful. It's too hard. Well, I have news for them. It's not as hard as going to the funeral of a loved one whose life was unexpectedly ended by a bullet when they were sitting in class where they were supposed to be. It's not as hard as surviving a shooting and going through rehabilitation and living with scars for life.

Reema Samaha was one of the victims. In this video, her brother, Omar talks about her and about his advocacy for sensible gun laws.

This article about some of the survivors and others involved in the crime scene is a good reminder of the carnage of the day and the continuing pain. Five years later, how have the people involved changed? Think about the victims. Think about how ridiculous and shameful it is that we are doing nothing to stop the 32 daily gun homicide victims from losing their lives. Trying to change our country's gun culture and gun laws is hard. It shouldn't be that hard. Five years later, where are we? Marian Wright Edelman of the Children's Defense Fund asks that question in this article:

As a nation we can’t afford to keep waiting for common-sense gun control laws that would protect our children and all of us from indefensible gun violence. It’s time to repeal senseless gun laws like the “Stand Your Ground” laws enacted by 21 states that have grabbed so much attention in Trayvon’s case and allow people in Florida to defend themselves with deadly force anytime and anywhere if they feel threatened. More than two million people have signed online petitions saying they want to repeal these laws. It’s time to require consumer safety standards and childproof safety features for all guns and strengthen child access prevention laws that ensure guns are stored safely and securely to prevent unnecessary tragedies like those in Washington state. And in a political environment where the too-secretive and powerful advocacy group American Legislative Exchange Council (ALEC) pushed “Stand Your Ground” laws in other states along with other “model bills” that benefit some corporate bottom lines or special interests like the NRA, it’s time for all of ALEC’s corporate sponsors to walk away from enabling or acquiescing in destructive laws that protect guns, not children.

It’s a tragedy that five years after Virginia Tech so little has changed. How many years must we wait until tragic headlines about school shootings, children dying, and people using the “shoot first and ask questions later” defense to take the law into their own hands go away? When will we finally get the courage to stand up as a nation and say enough to the deadly proliferation of guns and gun violence that endanger children’s and public safety?

Colin Goddard, survivor of the carnage on April 16th five years ago, is going to push that rock further up the hill today and going forward. This piece for Huffington Post written by Colin and his Dad, Andy, lets politicians know that he, his Dad, and the rest of us who are victims and advocates for common sense, are not going away. Colin and other victims and survivors who will be on Capitol Hill today are increasing the decibel level of the voices of the majority of Americans until they, and we, get heard in the halls of Congress:

Every day in America, 32 people are murdered by guns. That's a "Virginia Tech" happening in our nation every single day. That's why there will be 32 of us walking the halls of Congress next week. But we will not just be there speaking for ourselves and our lost loved ones. We will be speaking for all of the 30,000 Americans who are lost to guns every year -- all of their families loved ones and communities -- all Americans who are sick and tired of living with the preventable tragedy of gun violence in our nation and who demand accountability from our elected leaders to end it.

Mr. Speaker, we're coming over to your office this week, and the offices of many of your colleagues. If you think it's not "appropriate" to talk about gun violence during the week that marks both Virginia Tech and Columbine -- the worst shootings in our country's history -- then when would it be for you?

It's inconvenient to talk about mass shootings and meet with the victims' families and the survivors. As I said earlier, it's also inconvenient to bury a loved one lost to gun violence. Colin also represents the inconvenient truth and he represents the people's lobby. Over 80% of Americans polled in dozens of polls over many years, including gun owners and even NRA members, agree with Colin. We will continue reminding our politicians of that and that they can actually do something about this national public health and safety problem. People have not forgotten. We can't let the memories of those who have been shot to death die with them. On the 5th anniversary of the shootings, many have chosen to remember and to support the efforts to change the discourse about gun violence. 7000 people ran through the Virginia Tech campus to keep those memories alive. Thank goodness for common sense.