Gun battles on our streets 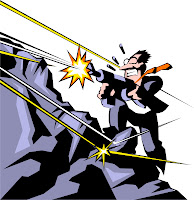 I have asked before- are we at war? This scene from a Massachusetts shooting makes this question legitimate and scary.

"A day after a shoot-out and standoff that featured more than 100 rounds of gunfire on West Street that left a state trooper wounded and the suspect dead, residents and witnesses were still in shock. (...) Authorities said Laguer wounded the first officer to respond to a call of shots fired – trooper John Vasquez. A gun battle and stand off between Laguer and state and city police ensued, lasting slightly more than two hours. No other injuries were reported, but Laguer was found dead inside 102 West St. (...)

More than 100 rounds were discharged between the suspect and police on a busy Friday morning. Bissonnette said he is thankful because the scene could have been much, much worse.

“We were pretty close to a real traumatic event in downtown Chicopee as you could possibly have,” Bissonnette said. “I’m still in shock no one else was shot.”

“At a quarter of 8, we have little kids walking to school, lots of commuters. It’s just horrific to know all the activity that was going on while this guy is just letting loose with a fusillade of automatic weapon fire,” Bissonnette said."

If Newt Gingrich has his way, though, we would be seeing this all the time. And not only in America. Newt would love to pass a resolution through the United Nations to arm everyone in the world with guns for self defense. Now there's a great idea. Seriously folks. Has he ( and those who agree with him) gone completely gun nuts?  Stephen Colbert reports on Gingrich's speech to the recent NRA convention below:


Is this the kind of world we want? Should everyone be armed everywhere we go? I know the answer to that one and please raise your hand if you think this is a good idea. Where is common sense? When it comes to guns, common sense goes out the window. Sometimes only humor can point out what is wrong with views such as those held by Newt Gingrich and others like him.

And so readers, we let this stuff happen with nary a twitch. We look away when Newt Gingrich makes these ludicrous and dangerous statements. The thing is, he happens to represent a group in this country who believe he is right. That's what we get when we fail to challenge the lies and myths of the gun lobby. That is what our elected leaders have ensured by their inaction on reasonable gun laws and passing laws that make our streets more dangerous.; a big yawn when another shooting happens. From this article in the Sun Sentinel:

Guns have become fun, and exciting, rather than instruments of death. We even have a new place in Las Vegas called Machine Guns Vegas, where cocktail waitresses are friendly and give you handguns and semiautomatics to try out. I am not making that up.

And we have public officials who also seem to think we need more guns.

Florida's Stand Your Ground Law has gotten a lot of publicity and criticism since the Trayvon Martin shooting, but you won't find enough legislators with any guts to do anything about it.

In Illinois, a ban on assault weapons — and yes, doesn't everybody need one of these — will quite possibly be overturned.

Judges are citing the Second Amendment. As if Thomas Jefferson and his buddies felt we all had the inalienable right to own our very own AK-47.

And no one really seems to care.

It's as if all this weaponry and violence have become just another pesky part of daily life that we have to accept, kind of like finding out we were given the fish sandwich instead of the burger at the McDonald's drive-thru.

And the bloodshed continues, and has less and less of an impact. We are becoming desensitized, numb to it all.

When we talk about gun casualties, that's one of the biggest.

The bloodshed does and will continue as long as we don't act or care. I care. More than 80% of Americans say they care and support gun laws that could prevent some of these shootings. It's time for them to demand action. This is a uniquely American problem as this article from the Guardian discusses. Gary Younge, the reporter, wrote about his experience at the recent NRA convention in St. Louis, Missouri and his reflections about the gun culture in America as a British citizen:

This has left the NRA with a problem. Now the Democrats have caved and the supreme court has a pro-gun majority, it simply has no worthy enemy. No one at the convention can point to a single concrete piece of legislation from the White House that they didn't like. Instead, they simply raise the spectre of an Obama second term. Unfettered by the need to stand again, he will come for your guns. There is absolutely nothing, beyond his right to appoint people to the Supreme Court and beyond, to suggest this is true. But there is nothing to prove it couldn't be either.

In Missouri, says Oxford, one representative attempted to add gun ownership to the list of protected categories alongside race, gender and disability so that no gun owner could be discriminated against in employment. "We asked her if she knew anyone that had ever happened to," says Oxford. "She didn't."

It is this fear, of the unknown and the known, both manufactured, exploited and real, that hangs over the convention. Time and again people paint scenarios in which I or my family might be attacked, threatened or in some way violated as a rationale for arming myself. In this atmosphere, Richardson's evocation of Rwanda, while extreme, is not entirely ludicrous.

"Ultimately it comes down to whether you trust other people or not," says one gun control activist. "We do, they don't." The ideas that the government might protect you, that the police might come, that if nobody had guns then nobody would need to worry about being shot, are laughed away. "By the time you call the police it could be too late," says Britt, who has never had to pull a gun on anyone but has had to make it clear he might a few times. "All they can do is write the report." When the breakfast is over I tell Britt that I am heading into town to see some people. "Be careful," he says. "St Louis is a very dangerous place."

Indeed. America's streets can be dangerous, but in a different way than "Britt" ( above) suggests. And then, of course, to end, are the statements made by NRA Board member Ted Nugent during the NRA convention last week-end. This is strong language and language that has the possibility to incite violence. In addition, it was so violent and threatening in its' nature that it caught the attention of the Secret Service as well it should. Check it out for yourself:

Our President and Attorney General are criminals? Really Ted? Chop their heads off in November? Really Ted? So why would GOP presumptive Presidential nominee Mitt Romney seek the endorsement of Ted Nugent and pander to this kind of rhetoric in the first place? Why does anyone want the endorsement of this vile man? Romney will have to explain more at some point but so far, this is all he has said so far:


"Divisive language is offensive no matter what side of the political aisle it comes from," said Andrea Saul, a Romney spokeswoman. "Mitt Romney believes everyone needs to be civil."

Not good enough. This was more than divisive language. Nugent's language came right from an extremist gun nut who has a national following as a rock music star and sits as a leader of the NRA. It also came from the current thinking of the NRA and the gun rights extremists who applaud comments like this. It is not only not acceptable, it should be called out and stopped before something happens as a result. What did the NRA leadership say about it?

What has Nugent said about his remarks once called out?

“I’m a black Jew at a Nazi-Klan rally,” he said. “And there are some power-abusing, corrupt monsters in our federal government that despise me because I have the audacity to speak the truth.”

He went on to add: “I spoke at the NRA and will stand by my speech. It’s 100 percent positive. It’s about we the people taking back our American dream from the corrupt monsters in the federal government under this administration, the communist czars he has appointed.”

Not only does not apologize, he makes it worse with his follow-up remarks.

If Ted Nugent's ideas about our country come to fruition, we may indeed have bloody gun battles on the streets but it wouldn't be coming from the side of gun control activists or President Obama. That kind of stupid and dangerous talk can lead to actual acts of violence. Common sense should tell Mitt Romney that he should distance himself from Nugent and reject his comments. Common sense says that these kind of remarks need to be called out and stopped by those in the position to do so. Common sense tells us that any kind of talk of an insurrection or political killing of those with whom we disagree in our own country is actually not out of the realm of possibility. Many in the gun rights movement are getting themselves ready for just that. From the "Insurrectionist Timeline"kept by Coalition to Stop Gun Violence:


February 22, 2012—Speaking at a town hall meeting in Bixby, Oklahoma, U.S. Rep. John Sullivan (R-OK) makes the following reference to a budget plan by U.S. Rep. Paul Ryan (R-WI) that had passed earlier in 2012 in the House of Representatives: "Like I said, after this last election, the first order of business is pass a budget. Now, I believe that. I supported the Paul Ryan budget and sent it over to the Senate. Now I live with some Senators, I yell at them all the time, I grabbed one of them the other day and shook him and I'd love to get them to vote for it—boy I'd love that. You know but other than me going over there with a gun and holding it to their head and maybe killing a couple of them, I don't think they're going to listen unless they get beat."

As long as we go along ignoring remarks like those made by Nugent and others like him, ignoring mass shootings and actual gun battles on the streets of America, ignoring the majority support for sensible gun legislation, ignoring the voices of the people's lobby in favor of listening to the gun lobby- this is what we will get.

UPDATE: This may not be the last update on the Ted Nugent situation. But here is his most recent comment about his threatening behavior and words:

"I respect their duty to do so," he said. "The rules of engagement for the Secret Service is to respond even when someone as maniacal as a Wasserman Schultz or Pelosi or Boxer or Feinstein" complains.

"They want to shut me up, and it ain't going to happen," Nugent said.

Really Ted? Maniacal? Some days one has to wonder if the up is down and black is white. What in the heck is Nugent trying to say here? Deflecting his own craziness by accusing perfectly sane people of being maniacal is surely proof that this man is losing it and needs to be shut up before he does any more damage. He tried to claim that he didn't make any threatening comments. He lies.