Tragic case of "self defense" in Florida 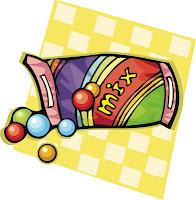 A Florida boy dead- armed with a bag of Skittles. I just can't stop thinking about this case of a 17 year old Florida boy who was shot to death by a young man who claimed self defense. The boy was walking home after going to the store for a bag of Skittles and a can of Iced Tea. They were in his pockets when his body was found. Did they look like a gun to the shooter? From the article:

"Trayvon Martin, an unarmed African-American teenager, was shot and killed in a gated community in Florida late last month by a white neighborhood watch captain, according to police. But the watch captain, George Zimmerman — a 26-year-old college student who has admitted to police that he shot the young man — still walks free. And Martin's family is pleading for answers and demanding justice.

At this point there are more questions than answers in the young man's death, but this much is known: Martin was packing little more than a bag of candy and a canned iced tea on the night he was killed.

"He had a gun, and Trayvon had Skittles," Benjamin Crump, a family attorney, told The Huffington Post this afternoon.

Martin, 17, a high school junior who lived with his mother in Miami, was visiting his father and stepmother at their home in Sanford, a suburb of Orlando, on the weekend of Feb. 26. During halftime of the NBA All-Star Game, Martin's family said he walked to a nearby convenience store to get some candy for his younger brother. On his way back home, according to reports, he caught the attention of George Zimmerman, a 26-year-old college student and self-appointed captain of The Retreat at Twin Lakes neighborhood watch.

Zimmerman, armed with a 9mm handgun, trailed the boy in his car. At some point, Zimmerman called 911, telling the operator there was a "suspicious person in the area," according to a police report acquired by HuffPost."

Zimmerman is walking free and the parents of young Trayvon have buried their son. Why?


The Sanford Police arrived and found Martin lying face down on a patch of grass about 70 feet from his family's home, a pack of candy in one pocket and an iced tea in the other.

"What happened between him being confronted, up to the point where he got shot, nobody knows but him and that guy," Tracy Martin, the boy's father, told HuffPost. "I'm looking for justice for my family. I want answers but I don't have any to give — not for his mother, his brothers or sisters. We don't have nothing, but we want answers."

According to reports, Zimmerman's gun was legal and he has claimed to authorities that he shot Martin in self-defense. Crump, the family's attorney, described Zimmerman as a "loose cannon" and questioned why any neighborhood watchman would be carrying a loaded gun. He has asked law enforcement authorities to turn over recordings of the call to 911 that Zimmerman made the night of the shooting, in the hopes that it might shed some light on the incident. Crump said if the recordings are not given to the family, he will file a public records lawsuit on their behalf.

(...) Lee said that Zimmerman has a legal permit to carry the weapon used in the shooting, and that he told police that he shot Martin in self-defense.

“He felt the need to defend himself,” Lee said. “ I don’t think it was his intent to go and shoot somebody” that night.

Here's the thing. Zimmerman may not have set out that night to kill someone. Maybe he didn't "intend" to shoot the boy. But he did shoot the boy. He was a legal gun permit holder. If he hadn't had a gun that night, he would have called police, as he did actually, and then let them take care of it. The boy would be alive and Zimmerman wouldn't be faced with the fact that he shot someone he didn't need to shoot. There was not an emergency. The boy wasn't breaking in to a home or attacking anyone. What happened is between the dead boy and the shooter, said the boy's father. And therein lies the problem with "Stand Your Ground" or "Shoot First" laws. No one but the shooter knows the truth because there are often no witnesses. The shooter can say whatever he wants and claim self defense. The shooter can walk away from a trial and a murder charge. The victim is dead. In this case, the victim was unarmed. So if there was an "altercation" should one get shot over a verbal exchange? When people like Zimmerman, described as a "loose cannon" by others, carry guns around on the prowl for potential trouble, they just might and just do use those guns. These folks are ready to shoot and are fearful of danger around every corner.

Florida has a Stand Your Ground Law. You can read here how people are using it to get away with murder. Readers of this blog know how I feel about the just vetoed "Shoot First" bill in Minnesota. The people of Minnesota did not ask for this law. But the bill's main sponsor, Representative Tony Cornish doesn't care. From the article:

Rep. Tony Cornish's office at the capitol looks like a taxidermist's dream, and he says he is locked and loaded for the next round of his push.

"We'll have to jam it down their throat," he said. "It may take two or three years, but we'll do it."

Cornish's castle bill offered armed property owners immunity from prosecuting for shooting or killing a person who entered a home by "stealth or force" and it expanded the so-called castle to include cars, business places and even a tent.

"We just want more latitude for the citizen who's grabbed by the throat and beaten up," he said.

"Jam if down their throat"? Really? Bluster and threats are just not good when trying to debate bills in the legislature. And further, Cornish has this to say about Minneapolis Police Chief Tim Dolan:


"The one that disappoints me most is gun-grabber Tim Dolan," Cornish said frankly.

Minneapolis Police Chief Tim Dolan said it comes down to the safety of cops on the street, who may run through someone's yard or show up at their door -- essentially giving criminals a license to kill by claiming they were protecting their castle.

Dolan isn't alone in his criticism either. Dennis Flaherty, of the Minnesota Police and Peace Officer's Assocation, called the bill "NRA propaganda," and said it's a solution in search of a problem.

"Gun grabber"? Really? And then Cornish, a former Chief of Police of a small town in southern Minnesota says this:


Cornish, however, cites Virginia Tech and other massacres as an argument for an armed citizenry, and points out that it took several years to pass the permit to carry bill he authored. The man who has John Wayne posters outside his office says he's not to be underestimated as a stuffed politician.

"I've been beat up. I've been cut by a sex offender. I've been shot at twice. I've been through the mill in 36 years," he said.

Cornish also pointed out that his bill does have a provision that wouldn't apply if the person using deadly force knew he was shooting at law enforcement, but critics say the problem is proving that they knew it beyond a reasonable doubt.

What does Cornish mean here? He was a Police Officer. Those things he describes presumably did not happen to him as an ordinary citizen. There is a difference between a private armed citizen and an armed police officer. He seems to have conveniently forgotten that distinction.

When people with guns are given an excuse to shoot someone under the pretense and totally subjective self defense claim, we will see more murders like this happening on our streets. The proponents of the bills say we won't. They believe we will only see justifiable self defense cases. Such is not the case so far. We already have "Castle Doctrine" laws that allow for self defense in the home with no duty to retreat. But to extend that to the streets is a dangerous precedent. There is no sense at all in carrying out vigilante justice. To use the word justice in this case doesn't fit the situation. The injustice is in the fact that a teen was allegedly shot by a trigger happy man. At the least, there should be a trial so the facts can come out. The shooter should not get to be judge, jury and executioner. That is not how our judicial system should work. Shame on the states that have allowed the pro gun extremists to convince them that these laws are necessary. They are not. Where is common sense?

The Florida shooting has a lot of people upset. As I mentioned in my last post, many of the gun bills coming from the NRA and their bought and paid for politicians fly under the radar. Often the public has no idea the bills have been passed or what the ramifications of them will be in real life situations. The public is not asking for the bills. They are foisted on our states by people with national agendas. They want what they want. They want to jam them down our throats. Just as the recent discussions of many other issues being pushed by the far right extremists, they go too far. The majority of the public is waking up and starting to fight back. There is now a petition drive to ask for justice in the Florida shooting. If you want to sign the petition to call for justice in this Florida shooting, here is a link to it.