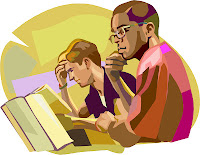 So in the last few weeks, virtually hundreds of articles and media reports about the shooting of Trayvon Martin have surrounded us. You would have to be living under a rock to be unaware of the shooting of the 17 year old Florida boy shot by a man claiming self defense. I have gone over a lot of details and provided a lot of links to stories. I have had to create a separate folder in my e-mail inbox for Trayvon Martin stories.

On the way to church this morning, we saw a group of teens walking along the street with hooded sweatshirts on. It happened they these were black teens. But it could have been white teens. It's a sunny, but chilly day in my neck of the woods today so it is not a surprise to see people with hoods of their jackets or sweatshirts up around their heads for warmth. But after the Trayvon Martin case, a hooded sweatshirt will never look quite the same. A hoodie. A black boy(or girl) with a hoodie walks through the neighborhood. What do we think? Do we think that it automatically means trouble. How about an adult that we don't recognize with a hooded sweatshirt? Do our sensors go out now? What is that person doing in the neighborhood? Will he/she be on the way to robbing a house? Will he/she be on the way to causing trouble down the block? Should I be afraid? What will I do? Should I get my gun out? If I do, will I shoot someone for walking in my neighborhood because I don't know him/her? There have been some recent home burglaries in my neighborhood. Does that mean someone should be shot for that crime? Some cars have been broken into. Should I shoot a person who is outside near a car?

But I digress. Back to church. While there this morning, I saw a young black man ( older teen) who had been a student of mine many years ago. He is hearing impaired and has had some speech/language disabilities. For a while, he had some academic and behavior issues. Thanks to the love and support of his parents, who adopted him, he graduated from high school and is now living on his own working at two jobs. He is quite tall and handsome and one could be reminded of Trayvon Martin. He is a soft spoken and kind young man who cares about his family and friends and making himself into a responsible citizen.  I spoke with him after church in a combination of speech and some sign language and finger spelling. He knew a little about Trayvon but he misses a lot of the news because of his hearing impairment. He asked me a few questions about the incident. Was Trayvon causing trouble or into drugs or something? I said no. He asked what he was doing then to cause the shooting. When I told him he expressed concern. He, too, could be at risk. At the end of the conversation, I asked him how he was doing. He said he was great and also that he was lucky to be alive. Indeed he is.

So what about the U.S. and the gun deaths and injuries of children and teens? Trayvon was not the only one. His death is finally the one that has called attention to some of our insane gun laws. His death has exposed some racial tensions that have been simmering in our country for many years. His death has been an eye opener for out country. This new report from the Childrens Defense Fund should also be an eye opener. It is dedicated to the memory of Trayvon Martin. Every year, the CDF puts out a report and titles it- "Protect Children, Not Guns". So here are a few of the sobering facts from this year's report:

• Would fill more than 229 public school classrooms of 25 students each;

• Was greater than the number of U.S. military personnel killed in action in Iraq and Afghanistan (5,013).2

Black children and teens accounted for 45 percent of all child and teen gun deaths in 2008 and 2009 but were only 15 percent of the total child population.

The most recent analysis of data from 23 industrialized nations shows that 87 percent of the children under age 15 killed by guns in these nations lived in the United States. The gun homicide rate in the United States for teens and young adults ages 15 to 24 was 42.7 times higher than the combined rate for the other nations.

Of the 116,385 children and teens killed by a gun since 1979, when gun data by age were first collected, 44,038 were Black—nearly 13 times more than the number of recorded lynchings of Black people of all ages in the 86 years from 1882 to 1968. Even so, more White than Black children and teens have died from gun violence.

Some of this bears repeating. "THE LEADING CAUSE OF DEATH AMONG BLACK TEENS AGES 15-19 IN 2008 AND 2009 WAS GUN HOMICIDE." (Caps are mine). If this is not something to wake you up, I don't know what is. Also, when it is put in the terms of how many classrooms the dead bodies of children killed by guns in 2008 and 2009 would fill--- 29---- why are we sitting here reading this blog? Trayvon, along with all of these student, will not be sitting in a classroom any more. What in the world has this country been doing? What in the world have our elected leaders been doing and thinking? Many have been listening to the NRA and the fear mongering while enough children have been killed by guns to fill up 29 classrooms. Where is common sense?

A new blog, Kid Shootings, is keeping track of the stories of kids being shot by guns or shooting others with guns. I urge you to read this blog here. If you don't believe the statistics, the real stories don't lie. Here is just from the latest entry:


A 14-year old Stuttgart, Arkansas boy was cleaning in a home with two other minors, including a 15-year old boy.  The boys found a loaded, unsecured .38-caliber Ruger handgun, which had been reported stolen.  The 15-year old was playing with it and shot the 14-year old in the buttocks.

Do incidents found on the Kid Shootings blog and in real life matter to our leaders? Who has their ears when voting on conceal and carry laws, now passed in 49 states and Stand Your Ground laws, now passed in over 20 states? Were they listening to this Utah gun blogger? Were they reading his blog as he tried to explain all the reasons why carrying a gun in public was a great idea? Were they reading about how he taught others how to safely carry a gun in public in his classes for permit holders? I hope not. Even he could not stop himself in a moment of passion and anger, or for whatever reason, when this happened:

Police Friday said they believe Landon S. Jorgensen killed his live-in girlfriend and her 5-year-old daughter before turning the gun on himself.

The three were found dead Thursday in a double murder- suicide in the rural southern Utah town of Central.

More about Jorgensen from the article:


Jorgensen is a former U.S. Marine and gun enthusiast, according to neighbors and investigators. He had a blog, "Guns, Freedom and Politics: One young man's perspective," in which he said he aspired to own a gun shop and shooting range one day. Jorgensen was also the former president of the Red Cliff rifle group.

Jorgensen taught a tactical pistol class as late as June, a post on the Southern Utah Pistol & Revolver website states. He also offered to teach a class for people to receive their Utah concealed firearms permit.

(...) On his blog, he wrote, "I am a USMC veteran and was medically discharged for my back issues. When I was discharged I immediately got into being a firearms instructor. My passion is to teach people the correct way to use firearms so that they can be both safe and fun."

He listed "Arguing With Idiots" by Glenn Beck as his favorite book.

He shot his girlfriend, her 5 year old daughter and then himself. Why? What a senseless loss of life. Who can shoot a 5 year old child? It's unimaginable. Guns do not make us safer. They don't even protect the people who proclaim that they will even teach others how to be safe and have fun with guns. Guns are dangerous weapons designed to kill people. And kill people they do- more in America than any other industrialized country in the world. It's the laws, stupid. It's our gun laws. There is no other way to explain it. We have insane gun laws in our country that have now, after much work and lobbying by the uber powerful and well funded NRA, resulted in an almost cavalier attitude about guns while trying to convince us, falsely, that guns have made us safer. They have not. How much more proof do we need?

Today in church, I announced an upcoming "hoodie" rally in my community to honor Trayvon Martin. Several people spoke with me after church about how the Trayvon Martin case had really gotten to them. At long last, people have had enough. Trayvon Martin is us. He is our children. He will not be sitting in a classroom where he has a right to be and where he should be.  George Zimmerman is the NRA. From this blog by Brady Campaign President Dan Gross:

But make no mistake, it is not a surprise that it happened in Florida, the NRA’s closest thing to an armed utopia.   In fact, much more so than any of the shills they had promoting their agenda in their big budget propaganda campaign, George Zimmerman is the embodiment of the gun lobby and its vision for America.

George Zimmerman is the NRA.

And now the NRA has made it abundantly clear that their vision is of an America that looks just like Florida, a nation where it’s easy for criminals and dangerous people to get, carry and use guns — a nation without any gun laws, where just about anybody can get a gun and use it anywhere.  Their spokespeople use fear, bordering on paranoia to justify flooding our streets with armed and violent people, and the result is more tragedies like Trayvon Martin

Zimmerman represents the crazed thinking that has led to dangerous laws that have resulted in more pre-school aged children ( from the CDF report above) to die from bullets than law enforcement officers in 2008, 2009! Really everyone. When is enough enough? There are things that can be done. I will write more about them in another blog.