Holes in the arguments 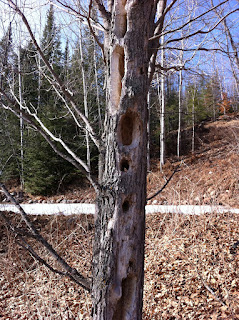 Yesterday I had the chance for a hike into a friend's cabin for a few hours on a beautiful uncharacteristically warm "spring" day. We brought our snowshoes but didn't need them because the snow was melting so fast that there were bare spots on the road. On the way there we saw two bald eagles and after arriving we saw a Pilated Woodpecker flying near the shore line of the lake. They are splendid to see. But they also peck some huge holes in trees and stumps. The photo here is a tree trunk near my friend's cabin where the woodpeckers have worked for years to carve out huge holes. They have left the tree there on purpose because of it's reminder of the birds.

It was a wonderful retreat from the world of blogging and the world of gun violence. It was quiet, serene, full of the big sky and the treed landscape overlooking a big bay of the lake near Duluth. But upon my return, it didn't take long for reminders of the real world carnage of bullets on our streets to intrude back into my life. I just wonder how many more times, for example, we will read stories like this one about a three year old finding a loaded gun in the car of his parents and, being curious as kids are, shooting himself to death. What are gun permit holders thinking? This is the 3rd such incident in almost as many weeks of a young child shooting him/herself or another with the loaded gun of a parent. The others are mentioned in the linked article above. One of them involved the gun of a police officer, who also carelessly left it, loaded, in his car and one of his children killed the other with the gun. Where is common sense? Here is the interesting statement:

A spokesman for the Second Amendment Foundation said existing laws are enough to encourage gun safety, as long as the gun owners obey them.

"Responsible people will maintain gun safety whether there is a law or not; irresponsible people will ignore the law," said Dave Workman, senior editor of the group's publication, called thegunmag.com. He said existing statutes, including child endangerment laws, were designed to prevent such tragedies.

Workman said what he can't figure out is why the two men left their guns in their vehicles when they were licensed to carry them.

"Most responsible gun owners, especially if they're licensed to carry, will keep their firearm with them," Workman said.

Here's the thing. Permit holders are not always careful. They should be. When state laws were passed allowing more people to carry more loaded guns in more places, the gun rights groups said these things would just not happen. People would be careful. Permit holders are law abiding and wouldn't be shooting people or be careless in public. But they have been- too often to count on two hands any more. Permit holders leave their guns all over the place, intentionally or not- in cars, in store dressing rooms, out on a table, in backpacks and purses- where they are discharged on purpose or by accident. Just one of these shootings is one too many.

On the same day as the news of the three year old's tragic shooting, this shooting outside of a Texas courthouse made the news. The man seemed to have "snapped" and grabbed a gun and just started shooting at anyone. Now one is dead, and 3 injured senselessly. From the article:

Authorities said Granger was outside the courthouse awaiting the continuation of his criminal trial Wednesday when he grabbed a gun from his truck and opened fire. Seabolt was shot as she tried to run to the courthouse, while others dropped to the ground and law enforcement officers returned fire.

"It was crazy," said Beaumont Police Chief Jimmy Singletary. "He was shooting. Our guys were shooting."

Judge Larry Gist, whose office is across the street from the main courthouse building, said there was "pandemonium" as law enforcement flooded the scene.

Police said Granger fired more shots from his truck then ran over his daughter as he drove away. He abandoned the truck in the middle of the street about three blocks away and took several people hostage at a construction business.

Granger told police by phone that he was wounded, then he surrendered and was taken to the hospital.

Rife Kimler, Granger's attorney, said his client's 20-year-old daughter had testified against Granger on Tuesday in what was an emotional family dispute, but that he had thought the trial was going reasonably well.

"I didn't have him on my list of dangerous ones," Kimler said of Granger.

He wasn't on the list of "dangerous ones". Here's the thing. Often people who don't seem to be dangerous can become so in a flash. And when a gun is available to them, not only are they dangerous, they are armed and dangerous and sometimes deadly. Notice that pandemonium reigned at the scene. Notice- there were armed police officers there and they had difficulty stopping the man even while engaged in exchanges of gunfire with him. That pokes holes in the argument that an armed citizen could have saved the day. That is the hole in the gun rights arguments. More guns will make us safer in public. More people carrying will make us safer. Until, of course, we aren't. Until children shoot themselves or a sibling with that gun for self defense in public. Until someone suddenly starts shooting crazily in a public place in a moment of anger or passion. Until..... There are just way too many holes in the arguments for having more guns on our streets.