A country tired of George Zimmerman 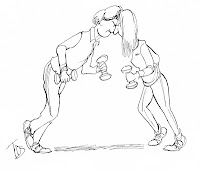 Enough is enough. Aren't we all getting tired of the daily news reports about what George Zimmerman did or didn't do before, during and after the shooting of Trayvon Martin? Are we tired of the unwarranted attacks on Trayvon Martin his problems at school as if they had anything to do with what he was reportedly doing the night of February 26th? We need some resolution to this before things get worse. As we watch the video of George Zimmerman walking into the police station, speculation abounds. Did he have a gash on the back of his head? Were those stitches there? If so, did he receive medical attention for the stitches? Since the video was timed at about 35 minutes after the reported shooting took place, was there time for him to be treated at an emergency room? Where was blood on his clothing from his supposed bloody/broken nose and/or from Trayvon? Why did he exit the patrol car in a manner inconsistent with someone who had just been in the fight for his life? Why did police allow him to walk around in the shoes that could have provided evidence? If this video occurred a mere 35 minutes after the shooting, how much time did it take to investigate the crime scene? Was evidence taken from Zimmerman's clothing? Where are the alleged grass stains? Let these things be decided by a jury. Let the process begin and get it out of media speculation on both sides.

And now yet another witness has come forward. This person says that Zimmerman got up quickly right after the shot was fired. Does this square with Zimmerman's story that Trayvon had him pinned on the ground and had been banging his head on the pavement in the struggle right before the shot was fired? If Trayvon had been on top of Zimmerman, how did he get up so quickly under the weight of a dead and bloodied body? If there is a gash on Zimmerman's head it appears to be towards the top of his head. How could that have been the result of someone pounding his head into the pavement? The longer this goes on, the more questions there are and the longer the situation festers in the court of public opinion. The vacuum will continue to be filled by conjecture and opinion and some actual facts.

This article from the Orlando Sentinel, trying to clear up a few things, makes a claim that according to the Sanford Police Dept. the clothing of both men was taken and bagged by police. Really? Then how did Zimmerman still have on the clothing he must have been wearing at the time of the shooting when he was taped walking into the police department? Did he change clothes? When was the clothing taken? If it was taken after Zimmerman walked into the police department, wasn't it already compromised because of the time elapsed? Did it show grass stains on the back of the shirt? From the video it doesn't appear that Zimmerman's shirt has stains on it. From the video, an officer is seen to touch Zimmerman's clothing and wipe something on his own pants. Was that evidence that could be used in a trial? We need answers but we won't get them in the court of public opinion.

Reporter Joy-Ann Reid of DeGrio.com took us to the crime scene as she walked from where the altercation likely began to the place where Trayvon's body was found. As it turns out, it was a sidewalk between two rows of town homes with the back yards of the homes abutting the sidewalk. It is used by the neighbors to walk their dogs and get to other homes by foot. Trayvon was heading to the town home where he had been visiting with his father's fiance. His body was found, according to Reid, face down in the grass, some feet from the sidewalk, with his feet facing the sidewalk. How does this square with Zimmerman's story that Trayvon was banging his head against the pavement? Was there blood on the sidewalk? It was raining that night so it might have been difficult to discover that? We need answers but we won't get them in the court of public opinion.

And then Zimmerman's father makes a political statement as if things were not already becoming too divisive: " I never foresaw so much hate coming from the President." What does he mean by that? Why did he interject that into the conversation? How could President Obama's statement about Trayvon Martin be considered to be hateful?

So the longer this goes on, the worse it will get. With pro gun commenters and bloggers making incendiary and racist comments like this on the Facebook page of Coalition to Stop Gun Violence, how can the communities and the country come together and solve the problem of potential racial tensions? ( language taken from the quotes and not mine):

Pro-gun activist Thomas O'Neill found the topic of shootings involving children hilarious and commented, "Did you guys know that there is a new kind of bullet that is actually built with technology that can pin-point the trajectory to people's heads?! 1 to 4 year old specifically!"

McKenzy Mallon had a good laugh, too, writing, "NO! Guns are evil devices made by evil people! If Zimmerman was not allowed to carry an assault machine gun Trayvon would still be ALIVE!"

With the extremes taking sides on the issue making statements such as the ones above and the ones by the Black Panthers, below, how can we solve the problem of people shooting each other?

Members of a group called the New Black Panther Party are offering a $10,000 reward for the “capture and citizens arrest” of George Zimmerman, the neighborhood watch coordinator who shot Trayvon Martin in Sanford, Fla., on Feb. 26.

“We cannot sit back as men and allow Zimmerman to remain free and on the loose because he is a danger to himself and others ... We must use our constitutional rights and Florida law to organize a citizens arrest in order to see that justice is done,” said group spokesman Chawn Kweli, according to a press statement on the group’s website.

The court of public opinion is not making things better. But it may just be reminding Americans of the many gun deaths in general in our country as it did for these California parents. And speaking of the many gun deaths in America, today is the 31st anniversary of the assassination attempt on President Reagan and the shooting of his Press Secretary James Brady. Let us remember the life long struggle of the Brady family as they have coped with the after math of that high profile shooting. Let us also remember that President Reagan favored reasonable gun laws.


As reported in the media, after mentioning he was a member of the NRA, President Reagan stated the following at a George Washington University ceremony on March 28, 1991, marking the 10th anniversary of his near assassination: "With the right to bear arms comes a great responsibility to use caution and common sense on handgun purchases. And it's just plain common sense that there be a waiting period to allow local law-enforcement officials to conduct background checks on those who wish to purchase handguns."

Let us remember that the system of requiring background checks for sales of guns by Federally Licensed Firearms dealers was named for James Brady- the Brady Handgun Violence Prevention Act of 1993. Let us remember that Travyon Martin's case, as polarizing and senseless as it is, is one of the many that happen every day in America. Let us not make Trayvon's case just another case that gets forgotten and that some of our elected leaders would like us to forget. It might remind some of them that they have voted in favor of weakening our laws that have put more guns into the hands of some who should not have them and have created an atmosphere of acceptance for guns everywhere. This has created communities where fear and paranoia cause more people to carry guns and more people to think of shooting someone over stuff or over a suspicion or because of too much to drink, or because of mental illness, or because of anger or a domestic dispute. Guns are not the answer. Guns are not the solution. Guns are the problem.

With the NRA ( and ALEC) under scrutiny because of its' roll in helping to write and push gun laws that allow shootings like this to happen, how can we believe anything the organization pushes in the future? And yet, they keep at it. I guess to these folks, Trayvon's shooting was justifiable and the Stand Your Ground laws are just fine. Five states are still pushing for Stand Your Ground laws after the shooting of Trayvon Martin. Where is common sense? The laws are working just fine- for some- but not for the increasing number of victims. Not for Trayvon Martin's family.

This case should not be tried in the court of public opinion. If justice is to be done, Zimmerman needs to be arrested and then the legal system should be allowed to work. People of many different viewpoints share the view that it's time to have the case dealt with by the justice system and not the rumor and innuendo system as it is now. This blogger from the Chicago Tribune agrees that the court of public opinion is not helpful and can be harmful.

But the unofficial judges in the court of public opinion deserve similar criticism. Consider, for example, the case of Richard Jewell, tried and convicted by the masses of setting off a bomb at the Atlanta Olympic Games though he had nothing to do with the crime; the case of the Duke lacrosse team, prematurely convicted in the media of gang rape; or the case of John and Patsy Ramsey, widely reviled after their daughter JonBenet was murdered.

Consider any number of other cases where we all just knew the outrageous truth until suddenly — gulp — we didn’t anymore. With apologies to those whose lives we left in ruins.

Yes, the Trayvon Martin case still demands more answers. But when those answers come, fairness demands that we listen to them.

As my readers know, I have taken a side in this case. My side is that Zimmerman should have to answer the questions in a court of law. My side is that  because Zimmerman had a gun and had the mind set of so many who carry loaded guns in public just about everyone seems suspicious. Suspicion paired with a gun and Trayvon Martin is now dead ( and expressed in the above video of Brady Campaign President Dan Gross). It is my belief that part of the reason we have been left with all of these questions is because the Florida law assumes that the person who claims self defense is right and therefore the usual attention to the crime scene is not given. Chris Hayes of MSNBC sums it up well in this video:

If self defense is claimed and then determined by law enforcement to be true, as it was in the Trayvon Martin case, that can be the end of the case and the families and friends of the victim have no closure. This case just doesn't pass the smell test and the public is demanding answers. Let us hope that they will come soon so we all get a little rest and let the process of justice begin. And let us also continue to call attention to the dangers of guns everywhere in our communities. Then let common sense work it's way into the discussion and the process.