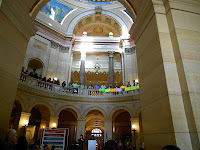 Today I went to the beautiful Minnesota State Capitol for Action Day to End Violence Against Women. But a lot of the talk turned to how happy people were with Governor Dayton's veto of the Shoot First bill which came last night. The Governor was scheduled to speak to the group but he got sick with a stomach virus. Could it have anything to do with Shoot First?  But I digress. I met a lot of supportive people who signed petitions and thanked the Governor and legislators for their votes against a bill that is one of the centerpieces of the pro gun extremists.

The main purpose of the visit today was to lobby in favor of legislation that will keep women safe from violence. I went as a Board member of Domestic Abuse Intervention Programs and because of my work in gun violence prevention. Many of the people there were victims themselves and could speak with authority about their own situations. Some of the people we were representing are no longer alive to tell their own stories. We all received the Minnesota 2011 Femicide Report. In 2011, 23 Minnesota women died from domestic violence and at least 4 children died from domestic violence. In addition, 6 family members/friends died and 1 man died as well from domestic violence. A brief synopsis of each woman and child's death was included in the report. Of the 23 domestic violence deaths, 12 were due to gunshot injuries. The others were strangled, beaten or stabbed. The report stated that, "While the percentage of femicides using firearms fluctuates year to year, murder with firearms is the most frequent weapon of choice, supporting the studies showing that possession of firearms can increase the risk of lethality. In 11 of the 12 gunshot cases, the perpetrator then killed himself. 5 of 6 family members, friends, and interveners were killed by gunshot."

The women and men who participated in the rally today know very well that guns are a factor in domestic killings. They don't need me to remind them. They know that the Shoot First bill, had it passed, would give domestic abusers a possible excuse in the shooting of a domestic partner. Of course, in most of the cases for 2011, the men also killed themselves knowing that facing the penalties for the taking of another human life would be unendurable. But I have personal experience with the man who killed my sister and lived for a while until he eventually took his own life - not with a gun. In his story to people with whom he came in contact after the murder, he mentioned that he felt weak compared to my sister and her friend, neither armed or dangerous. Was this a case for self defense? We will never know because he didn't live to try to make that case in a trial. But the victims were dead and couldn't tell their own story. That is the problem with taking the subjective word of the shooter when he/she shoots as a first resort rather than as a last resort. We should be making it harder to take another's life rather than easier. And so far, no one in Minnesota has been sentenced for justifiable self defense. Until we can prove that we have a serious problem with people not being allowed to use self defense when it is justified, we don't need a law to give people license to kill another and extend it to places outside of the home. 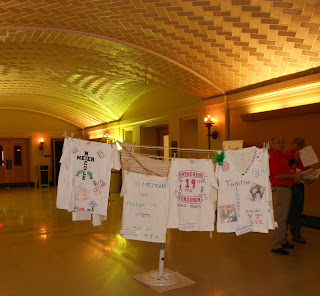 What we do know is that we have too many victims. Too many women die every year at the hands of an abuser. And the majority of the murders are due to bullets fired in the heat of passion from a gun that makes it all too easy. What's left is the stories of the women that are told by the rest of us when we lobby in favor of bills to protect women and against bills that will make them less safe. We also have the Clothesline Project about which I have written before. My sister's name is on one of the thousands of tee shirts that are strung up each year in various places. Today, the shirts of the 2011 Minnesota domestic murder victims were hung up on clotheslines at the Capitol. One can hardly look at them without tearing up. It is a powerful visual of a problem that continues to be with us. As long as there are tee shirts to be hung up with names and drawings and words about these murdered women, people like me and the hundreds who joined me today will continue to work on common sense solutions to save lives and protect women and children from senseless deaths and injuries.
Posted by japete at 9:46 PM