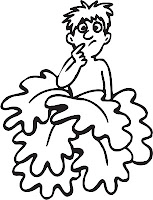 Some days, you just don't know what's next with guns and their owners! Again, those darned guns are causing problems. Here is a naked North Carolina man with an AK47 shooting in the neighborhood and at police officers. This was a 15 hour plus stand-off with the naked man retreating inside of his home and police surrounding the house. He was eventually apprehended. One man with an AK 47 can terrorize an entire neighborhood. Listen to the interview on the news video report about this incident. The neighbors had to stay inside their homes and didn't know what was going to happen. Others couldn't get into their homes or the neighborhood. That is because everyone knows that one man with a semi-automatic weapon can kill lots of people. In addition, this incident occupied most of the town's police department for hours. What a waste. This falls under the category of stupid and dangerous. A crazy person should not have an AK 47 or any other kind of gun for that matter, but many do. That's because we are doing virtually nothing to stop them from getting and keeping their guns. Where is common sense?

I guess even folks at gun shows, especially those law abiding folks, don't always know how to control their guns. The owners of guns should be more careful. This Tennessee licensed gun dealer was "showing off" his concealed handgun when it discharged.

Adams, a licensed vendor at the event in the Jacob Building on Magnolia Avenue, apparently was showing his personal concealed weapon — a Kimber .45-caliber semiautomatic handgun — to a customer when the weapon discharged, DeBusk said.

Adams had removed the gun's magazine, but one round was still in the chamber, DeBusk said.

Oops. How does this happen? I thought law abiding gun owners knew better than this. Apparently not. He's got more than a little egg on his face and certainly doesn't do the pro gun movement any favors. In addition, he has to be thanking his lucky stars that the bullet didn't actually end up shooting anyone else but himself when the bullet lodged in his hand. The owners of guns are not so careful. Guns are dangerous.

And this one from Connecticut is just one more reason why people should not be carrying loaded guns around in public. These things are not supposed to happen either, but happen they do. They happen too often to ignore. This man was lucky that a young person didn't come into that store dressing room and find his loaded gun. It could have been stolen and used in the wrong way. It could have actually been discharged by someone who had found the gun. Guns are dangerous. If people think they need a gun for everyday activities, then they have been wrongly convinced that it's very dangerous out there at church, in stores and while tending to a sick child. According to the article, the man was planning to go to the gun range after doing some other things. Couldn't he have put his gun in his car? Oh no, wait- not a good idea. Guns can be stolen from cars. Hmmmm. Where to leave that gun? From the article:


In an interview with the Post, Williams explained that he taken his gun and loaded it in anticipation of going to a shooting range in Bridgeport later that day.

"But then we were rushing around. We had a lot of things to do at church, then my son got sick and then I went to the store to get a shirt," he related.

He said he put down the gun in the dressing room to try on a shirt and forgot it. "I was just in such a hurry because I was worried they were going to be closing the store soon," he added.

If it's so inconvenient to have that gun with you everywhere you go, perhaps you should leave it at home. He went to church with the gun???? His son got sick? Don't take the gun. We'll all be safer.
Posted by japete at 7:49 AM