Shopping with your gun 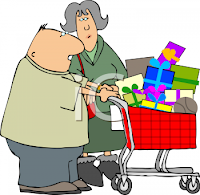 Really all, I do have to ask why a gun is needed when shopping. As you may or may not recall, I have written about a number of cases of permit holders accidentally discharging their weapons while shopping or on their way into a store or even while sitting in the car in a shopping mall. Several men shot themselves when the guns they were carrying fell from pants waistbands and discharged on their way into grocery stores. I wrote recently about someone who accidentally left a loaded gun in a dressing room. He was in a hurry and took his gun off to try on clothes. Whatever. Then I have written about guns discharging in stores. Here is the latest one about a gun discharging in the bathroom of a Walmart store. What in the world does someone need a gun for in a Walmart store? This is not the first time a gun has been discharged in a Walmart. In April of 2010, a man discharged his gun in the check-out line of an Arizona Walmart store. From the article:

Police are considering it an accidental discharge, but the video clearly shows David Walters fidgeting and playing with his gun in the moments before.

Witnesses and employees told police that Walters was moving the gun in and out of its holster while walking through the store, and would even take the magazine out and put it back in. A clerk at the electronics counter got scared she would be robbed.

Then in the checkout line, Walters was playing with the gun and the magazine fell out. When he reloaded it, police say, it accidentally discharged into the ceiling.

I hope you all remember that in Arizona, a permit is not needed to carry a loaded gun around in public. Nor is any training required. And these are the folks who would be able to carry in any other state if the National Conceal Carry Reciprocity Act of 2111 was passed into law. Good idea, don't you think? Or we could have people like this irresponsible law abiding gun owner hanging around in stores all over the country. And here's the worst of it:

The woman, who asked not to be identified, tells WTXL she was shopping at Governor's Square Mall Sunday when she realized she had lost her gun somewhere at the mall. She says she kept in the bottom basket of her child's stroller and perhaps it fell out when she was moving a diaper bag.

She says she carries the pistol for protection and that it was inside a black zipper case. She says it was the kind of case where you wouldn't know what was inside until you opened it.

She did a search with mall security, which she says turned up nothing.

The woman says she fears the gun could have been picked up by a teenager "who thinks it's cool to have a gun" and their parents may be unaware of it.

There is so much wrong with this it's hard to know where to start. Where is common sense? A woman is carrying a gun for self protection in a shopping mall. She has it in the bottom basket of her baby's stroller? You've got to be kidding. So if you are accosted at the mall, you will reach down and try to disentangle the gun from the stroller after you get it out of its' case and then what? In the mean time, what happens to the baby? Or let's hope the gun doesn't discharge in all of the confusion over trying to get at it in the stroller under shopping bags or whatever else is in that bottom basket. And then, to make matters worse, the woman is worried that a teen might have found this loaded gun. Really? Then why bring it into the mall in the first place? Leave the gun at home. We will all be safer. People have more to worry about from irresponsible "law abiding" gun permit holders in malls than they do from a random shooting in a mall or a grocery store. This is just not the kind of communities we should want for our country.
Posted by japete at 2:12 PM