Pick your Karaoke song carefully or else... 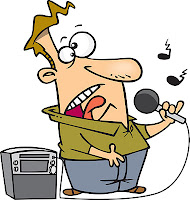 I guess even Karaoke is now dangerous. When a man with a gun doesn't like the song selected, you never know what will happen next. In this case, a California man shot his own son over an argument about Karaoke.


"According to a Shasta County sheriff's summary of events, the junior Oller told investigators the shooting erupted after he and his father argued over his playing of karaoke music. The report did not specify what song might have ignited the argument and sheriff's detectives have said they don't know."

I'd like to know which song could have made someone so angry that he would shoot his son about it. Those darned law abiding gun owners. You just never know when they are going to explode over something as small and insignificant as a song. That's the problem with guns. Their owners sometimes use them when they get angry over small things and suddenly they have created a very large mistake. In this case, the victim will live but the 70 year old father will spend the rest of his life suffering the consequences of being angry under the influence of a gun. Where is common sense?

Speaking of music and guns, it's a sad day in America. Don Cornelius, the producer of the T.V. show, "Soul Train" shot himself early this morning.  From this article:

In 2008, Cornelius was arrested and charged with spousal battery and dissuading a witness from making a police report, and assault with a deadly weapon. He was sentenced to three years probation.

During his rocky divorce battle with his ex-wife, Viktoria, TMZ reported that Cornelius made a morbid request in the couple’s divorce papers. "I am 72 years old. I have significant health issues," Cornelius said. "I want to finalize this divorce before I die."

It's always hard to know why someone commits suicide. Usually the survivors are left at guessing. In this case, it seems that Cornelius had problems with his marriage and domestic abuse and also with his health. It's such a final answer to one's problems that could perhaps be solved or dealt with in some other way. Guns make suicide easy. Suicides account for the highest percentage of overall gun deaths in America. From this article on the Brady Campaign web site:

People who want to die by suicide are well aware that a gun is the most effective method. Many people are now mourning the death of Cornelius who started out doing much for soul music and ended his life in tragedy.