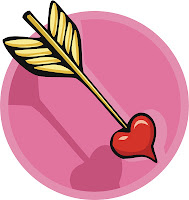 Nothing says "I love you" like a gun. Except of course, when one is used to kill someone you love. But never mind all of that. On this gun store website you can see how the day can be celebrated with your loved one shooting guns or who knows what else is possible? It looks like you can shoot a machine gun with your love. Or maybe "guns and roses"? That's always a good combination. You can get married at a gun range or order a special tee shirt for your love. If you check out the woman in one of the ads, sex appeal is big on this website. I guess that helps to sell guns.

Or how about a nice pink handgun or assault rifle for that special person in your life? Watch the video on this article about sales of guns for Valentine's Day. At the end, the gun store owner says, "Nothing says love like a gun on Valentine's Day." Whatever. This is not exactly the picture most people have of Valentine's Day gifts. From the article:

This year, the company designed gift cards with a Valentine's Day theme. He said holiday business for this holiday involves both men shopping for women and women shopping for men.

Because H&H has its own shooting ranges and a cafe, he often finds couples coming in to spend the day together.

“They just kind of make a date night of it,” he said.

So let's take a different look at this idea of guns and lovers. Guns are the weapon of choice in domestic disputes that end in murder. Women are killed most often by their domestic partners or ex-partners. This website highlights the facts about guns and domestic violence. From the site:


Guns and domestic violence are a lethal combination - injuring and killing women every day in the United States. A gun is the weapon most commonly used in domestic homicides. In fact, more than three times as many women are murdered by guns used by their husbands or intimate acquaintances than are killed by strangers’ guns, knives or other weapons combined. Contrary to many public perceptions, many women who are murdered are killed not by strangers but by men they know.

Domestic violence is a world-wide problem. Because of the gun culture in the U.S. guns are used most frequently by abusers to kill their domestic partners or ex-partners. From the IANSA Women's Network comes this information:


Perhaps most shockingly, the greatest risk of gun violence to women around the world is not on the streets, or the battlefield, but in their own homes. Women are three times more likely to die violently if there is a gun in the house. Usually the perpetrator is a spouse or partner, often with a prior record of domestic abuse. Gun violence can be part of the cycle of intimidation and aggression that many women experience from an intimate partner. For every woman killed or physically injured by firearms, many more are threatened. This is why IANSA has launched a campaign to demand policies which would keep women safe from gun violence.

As I have said many times before on this blog, women are the subject of many shootings by their spouses or partners. If they choose to have their own gun, they may also be at risk of that gun being used against them by someone in the home. Some women feel safer with guns in the home or carrying them. But the risk of being shot in the home is greater than being able to use the gun in self protection. From the Brady Campaign to prevent gun violence:

Every time a gun injures or kills in self-defense, it is used:

7 times in criminal assaults and homicides, and


So Happy Valentine's Day everyone. Please use common sense if you actually celebrate by going to the gun range or you receive a nice little pink pistol as a gift. And be careful out there. A gift of a gun is more dangerous than chocolates or flowers which, the last time I checked, don't kill or injure people.