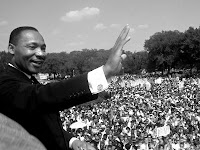 In the midst of squabbling about gun rights and victims, we should take a few minutes to remember a great man- Martin Luther King Jr. King changed the course of American history. His life was taken, as we all know, by a man with a gun. Sadly, these types of assassinations of political leaders have happened way too often over time. What Dr. King stood against was violence and yet he, himself, died in a violent way. His assassin, James Earl Ray, a criminal on the run, bought a rifle and a scope from a supply company in Alabama. To this day, there are those who believe that Ray did not shoot Martin Luther King. What we know for sure is that Martin Luther King Jr. died of a gunshot wound to his head.

Last year, when the Tucson shooting came so close before the yearly celebration of Martin Luther King's birthday, many thought about the coincidence of an attempted assassination of a public figure by a crazed gunman and the assassination of King. This article written by Representative Bobby Rush of Chicago, is a reminder of how gun violence affects us all. From the article:


When my colleague, the brilliant and beloved Congresswoman Gabrielle Giffords was targeted by a gunman on January 8th, in that moment that small, idyllic shopping plaza in Tucson, Arizona became America’s latest ‘Birmingham.’ The brazen, unprovoked attack in broad daylight that left Giffords critically injured, six people dead—including a nine-year-old child—and more than a dozen seriously wounded evoked the outpouring of positive spirit from a shocked nation. In that moment and in the days that followed, King’s view that “whatever affects one directly, affects all indirectly” was the sentiment that held sway in our nation. Our shared grief and concerns for those who survived and those who lost their lives was powerfully on display last Wednesday night at the memorial service where more than 30 million viewers watched as the President lent a soothing voice of comfort and solace to a grateful nation. But what about tomorrow, and the next day and the next? What happens when the TV cameras turn away from Tucson? What happens when the news media and much of the rest of our culture simply overlooks the shattered lives of thousands of grieving families throughout our nation who, each and every day, lose a loved one to gun violence?

These poignant words are what the struggle for common sense gun legislation and common sense in our thinking about the way in which gun deaths and injuries have become such a part of the American landscape. Gun violence does affect us all in one way or the other. Representative Rush's words are powerful as he invokes his colleagues to join him in the fight to make our country safer from the daily carnage in our communities:

He would not be silent like so many leaders—on the political left and the right—who continue to refuse to stand up to the powerful and well financed interests in our country who believe hand guns should be readily available with little to no background checks. A common sense measure like this might have prevented the Tucson gunman from damaging or destroying so many lives.

“Whatever affects one directly, affects all indirectly.”

My prayer on the day we mark the life and meaning of Dr. Martin Luther King, Jr. is that we heed his words once again and engage in the work necessary to put an end to the carnage wrought by gun violence.

I, for one, will do my part to make a difference.

Thank you Representative Rush for your words of one year ago. Nothing has happened to change the silence yet. Some of us are working hard to make a difference. On this day to remember Dr. Martin Luther King Jr. and his greatness and his focus on the poor and non-violence, let us take a moment to reflect on what is possible rather than what is a barrier to change. Dr. King did not let those barriers stop him from moving forward. In King's own words:


Nonviolence is a powerful and just weapon. which cuts without wounding and ennobles the man who wields it. It is a sword that heals.

There were many other words about non-violence spoken by Dr. King. I like this one because of the reference to using non-violence as a weapon rather than the real thing which actually wounds and kills. But I will end with these even more famous words from Martin Luther King Jr.:


Nonviolence is the answer to the crucial political and moral questions of our time; the need for mankind to overcome oppression and violence without resorting to oppression and violence. Mankind must evolve for all human conflict a method which rejects revenge, aggression, and retaliation. The foundation of such a method is love.