Show and tell with guns 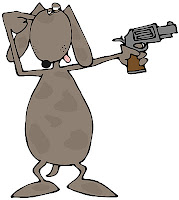 Apparently, people like to show each other their guns. Sometimes this can result in bad things-like people getting killed or injured. Such was the case for the shooter of the Mt.Ranier National Park Ranger.  Before he shot Ranger Anderson, he participated in a "shoot-out" with friends over an argument about a gun. I guess lots of people at this party had guns. Funny thing about that- when several people at parties pull out guns, people get hurt. 4 people were injured in the shooting before Barnes ran away from the scene to Mt. Ranier National Park and killed an innocent Ranger.


" As previously reported, investigators believe that shooting stemmed from an argument that followed a gun “show and tell” that saw at least two people fire several shots into the air.

Now, though, King County Sheriff’s Office investigators have said Barnes was one of two people who opened fire during the “show and tell.”

In a statement, Sgt. Cindi West said Barnes and another man opened fire after one of the partygoers refused to return a gun belonging to another man.

“A fight ensued and at one point at least two people pulled guns,” West said. “A shootout ensued.

“Witnesses said that Benjamin Barnes was one of the subjects that pulled a gun and fired.”"

Of course, this is not the first time I have written about literal shoot-outs. One has to wonder about the mentality of the people like this. I am wondering if this is common? It appears that it is. The video to which I linked in my last post featuring gun rights extremists showing off their shooting skills is another such stupid "show and tell" with guns. The guys with the guns love to brag about their guns and their shooting skills. Whatever. You may remember the video of Derek "Tex" Grebner, shooting his gun at a target and instead, shooting himself in the leg. Stupid and dangerous. People in other countries do stupid things with guns as well. This one was at a Russian wedding when a man challenges wedding guests to a game of Russian Roulette. The gun had rubber bullets but that didn't seem to matter. The man who shot himself suffered brain damage and is now paralyzed. And then, there is video that went viral at the time showing a police officer demonstrating gun safety to a classroom full of kids when the gun goes off and shoots him in the leg:

Guns are dangerous. This "show and tell " video below is meant, I guess, to prove that guns don't hurt people; people hurt themselves. After watching the idiocy in incident after incident of people doing dumb things with their guns and then, in some cases, laughing about it, we can see why the gun rights extremists like to convince people that it isn't the guns. That's a bunch of nonsense. People with guns can do a lot of damage to themselves and innocent people that wouldn't happen without the guns. The irresponsibility of the people and the guns in this video is beyond a laughing matter. And please check out the father having his toddler pull the trigger. Totally irresponsible.

This show and tell turned out to be lethal. Shouldn't a member of the Navy Seals, presumably trained about weapons, know better than to put a gun to his head, thinking it's empty and pull the trigger? Do you ever wonder about all of the incidents I post on this blog featuring law abiding citizens with guns doing stupid and dangerous things like this? If you don't, you should. Guns are dangerous and lethal weapons designed to kill. And they do with regularity. The show and tell needs to be about the victims of shootings. If there was more of that, maybe we'd finally get some common sense gun laws in this country and just maybe the gun culture that supports the idea that we can't do anything to regulate guns or their owners, would change.
Posted by japete at 11:04 AM