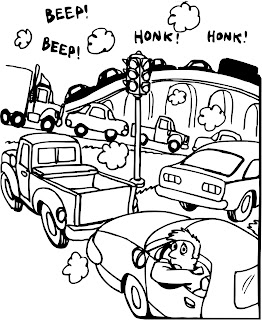 You know, I read about these sorts of gun incidents on a fairly regular basis. This Indiana gun owner may rue the day he decided to threaten a truck driver on I-94 in Wisconsin. What was he thinking? Here's what:


"While being booked at the jail, Manning -- who was still wearing a holster -- told other inmates that he was being tailgated by a semi, and that if the trucker hadn't backed off, "I would have put four rounds right in the engine block.""

Right. And so what if it caused an accident? And so what if the bullets missed and hit the driver or another driver? Since my husband and I drive fairly often along this route when visiting our daughter in Pennsylvania, this does not make me feel very safe. Those permit holders are not as safe as they would have us believe. Don't get someone like this mad or he'll shoot you. Seriously.

And then there's the senseless shooting of a Mt. Ranier Park Ranger by a guy who clearly should not have had access to guns. What's wrong when someone like Benjamin Barnes can own and buy guns? Where are the laws that would make it harder for this man to get his gun? Where is the community and family members who don't pay attention to the fact that a veteran with undiagnosed PTSD shouldn't have guns? Are family members afraid to intervene? How about his friends? Just because he is a veteran, are people afraid to mention that he shouldn't have guns? We live in a culture that turns the other cheek on people with mental health problems and guns. No one ever thinks someone like this will actually use that gun to kill someone. Except perhaps his girlfriend, who knew he was a danger.


An ex-girlfriend, with whom he has an infant daughter, filed for a restraining order over the summer after describing Mr. Barnes as erratic and possibly suffering from post-traumatic stress disorder. She noted that Mr. Barnes owned a small arsenal. One photograph released by Washington state law enforcement officials show a bare-chested Mr. Barnes brandishing two assault-style weapons. Did officials follow-up on the ex-girlfriend’s complaint or ask whether someone as apparently unstable as Mr. Barnes should be permitted to own and keep guns?

Families, friends and authorities need to be more alert to the potential for shootings for people like Barnes. Maybe an intervention is in order, something like what is done for alcoholics. Except, of course, we are dealing with deadly weapons. Does anyone want to confront someone pictured like this man was, with 2 assault weapons criss- crossing his chest which is all full of tattoos?

Domestic abusers with PTSD are especially dangerous. They are veterans trained in the use of guns. They already understand the damage that can be done with guns and perhaps have already shot people during their time in the service. At the least, they were trained to do so and trained to be aggressive, if necessary. And they are suffering from the after affects of war that affects their emotional and psychological state as well as their judgement. A recent shooting of a police officer in Minnesota was a result of a domestic case involving a veteran with possible PTSD. This shooting left Officer Schneider's   3 young children without their father. Officers may have to think differently when a call comes in about a veteran threatening a spouse or partner.

The other issue here, of course, is why in the world our Congress would pass an amendment to a credit card bill to allow people to carry loaded guns in our National Parks? At the time, here was the response from an administrator for the Parks system: ""If they wanted to stop this, it seems like they can," Faehner said before the House vote. "It comes down to whether or not they are willing to keep parks safe for the American people or kowtow to special interests like the gun groups."" Indeed. And now we have had a shooting of a Park Ranger by a deranged and dangerous man with a gun. And here is a response to this tragic shooting leaving 2 little girls without their mother, from a former National Parks administrator:


“The many congressmen and senators that voted for the legislation that allowed loaded weapons to be brought into the parks ought to be feeling pretty bad right now,” said Wade, whose term as chairman of the Coalition of National Park Service Retirees ended Dec. 31.

Indeed. To move on, here is another case of a gun owner shooting himself in the leg. This time, though, it was not actually a law abiding gun owner. Though a huge question remains. Where did this convicted felon get his gun in the first place?

Johnson told police while he was using the bathroom the gun fell, striking the toilet and going off.

Johnson suffered a gunshot wound to the leg.

Johnson, a convicted felon, could face charges pending the outcome of an investigation.

Could face charges? I certainly hope so. The man should not have guns, period. Advise to permit holders- don't take your loaded gun into the bathroom with you. It could be dangerous! And speaking of stupid and dangerous, another accidental shooting incident made it into the press.


The preliminary investigation suggests Ogg's younger brother was holding the gun when it unintentionally discharged, the sheriff's office said.

Oh dear! And last, but not least, the headline of this article should give us pause. " Student gunman dies after school shooting in Brownsville." Student gunman is an oxymoron. Those two words just do not go together. But when kids can gain easy access to guns, we have to rethink what is normal. And when students think it's O.K. to brandish a gun in school, we have a problem. " It's not clear what type of weapon the student had but police said he had displayed it." Where do kids get their ideas about guns? More will come out about where this boy got his gun, but as this new blog, kidsshootings says about the incident: " Every gun in the hands of a child first had to go through the hands of an adult." And why do school shootings in America seen like part of our landscape? That is tragic. Why sensible gun laws are not passed after so many school shootings and so many mass shootings is really a travesty of America's political system.

Where is common sense?
Posted by japete at 10:22 PM