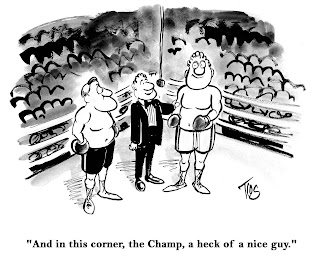 Why is this said so often about shooters? He was such a quiet guy. I can't believe he could do something like this. Thus is the case in the recent work place shooting at a Lumber Company in North Carolina. Yes, quiet guys buy guns. They are law abiding until suddenly they are not. No one suspects them of violent tendencies or the capability to carry out a mass shooting in the work place, or at home, or at a mall, or at a school or a church or a bar. But shoot they do. This is a problem in the U.S. We are the only country where regular shootings like this happen on a daily basis. We shrug our shoulders and say we can't do anything about it. This guy was law abiding. He wasn't a felon. How would a gun law have affected him? Presumably he passed a background check to buy his gun if he bought one from a Federally Licensed Firearms Dealer. That is the big over riding question and it is the idea that prevents our country from pursuing common sense legislation. My side says that we need to keep dangerous people from getting guns. That's true. Too many of them do. But in actuality it is mostly the quiet law abiding people who shoot others in the heat of the moment or when upset about a job or a divorce or have a beef with a friend or family member.

Many people own guns in America. Most of those who do own guns are law abiding. I write this a lot on this blog. I am interested in this because my sister was shot to death by a law abiding gun owner, until suddenly he wasn't. So on this topic, I highlight just a few of the many shootings by law abiding gun owners.  This shooting in Fresno, CA of 2 toddlers, a man and then the apparent woman shooter with a self inflicted gunshot wound seems surreal. The neighbors in this gated community had never noticed any problems in this household. In fact, according to the article:

Resident Eric Gonzalez watched in disbelief. He didn't know the family well, but ran into the husband several times in the laundry room or in passing on the apartment grounds.

"They were nice people," Gonzalez said. "The husband and wife seemed like they were in love with each other."

What could have led this woman, who was the alleged shooter, to kill her own small children? What happens to otherwise presumably nice law abiding people? Would they have done something this horrible if there wasn't  a gun available to them? Of course, we all know that people murder others with knives, blunt objects, and other methods. But guns are the most commonly used weapon in homicides. Guns can kill many at a time. Guns can kill from a distance making it harder for the victim to get away. Guns make it easier to kill and injure.

Andre Turner, the man who shot and killed 2 people and then himself  in a December Southern California work place shooting was a pretty good guy as well, according to people who knew him.

Robert Young, a 49-year-old telemarketer who lives across the street from Turner's home, told the Riverside Press-Enterprise that "everything looked completely normal over there."

"I never had an inkling he'd do something like that," Young said. "But who knows what happens in somebody's mind? People say, `He lived in that nice house, in a nice neighborhood, what could be wrong?'"

What about Shareef Allman who went on an October shooting spree at a California cement plant? He killed 3 people and wounded 7 during the shooting rampage. But, from the article:


Allman was known as "a real nice guy," was liked by other plant workers and seemed content, said Charles Bryan, another truck driver at the plant.

But Bryan said Allman was acting strangely Tuesday. "This is really weird," he said. "Yesterday it was like no one else was there but him. Our work is very dangerous. We're supposed to have eye contact with each other. But yesterday it was like we weren't there."

Mitchell Julien, 50, who showed up near the scene of the shootings and said he knew Allman, said the suspected gunman was "not a monster."

And this one, also about Allman:


What baffles them most is that the Allman they knew had the skills to resolve conflicts -- and often did. He was the one who would intercede when emotions ran high among others to say, "How can we work this out? Let’s come to the table. We can come to an understanding that is satisfactory," Moore said. "I never even heard him raise his voice."

There are some reports that at home, some of these people had bad tempers or acted differently from their public personna. That, too, is not unusual in many of the shooters who seem mild mannered and "nice" to their friends and co-workers. My point about writing this post is that it is not just bad guys with guns who shoot people. In America the majority of gun deaths are suicides. Some of these suicides come during a homicide. For some reason, the shooter is desperate, depressed, angry, upset. When a gun is available, it makes it easy to carry out a planned shooting or a spontaneous shooting. Guns are dangerous weapons designed to kill. People who own them often believe that nothing could or would ever happen to them or with their own guns. The shootings above could have been committed by anyone and anyone can become an instant victim. And in part because of the American love affair with guns, we have lost our common sense when it comes to dealing with the shootings so prevalent in our news stories every day. Americans own more guns than most other countries and Americans suffer from the most gun deaths than other countries not at war. This is not a coincidence.

As my readers know, I support sensible gun laws to stop felons, domestic abusers, those who are adjudicated mentally ill, minors and other prohibited purchasers from being able to buy guns without background checks. I also support limits on ammunition magazines to prevent some of the carnage during mass shootings. That seems like a ridiculous statement on its' face, doesn't it? When we seek to limit the damage from spree shootings, there is something wrong with our culture. I am not, as some would believe, a "gun grabber." I don't agree, though, that guns carried around for self defense make us safer in public places and will prevent public place shootings. That "discussion" has been pervasive on my blog. My position is clear. The pro gun extremist position is clear. But using the second amendment to prevent measures to improve public health and safety is cynical and unproductive. That is what needs to change in order to save lives. When laws and culture make it abhorrent and intolerable for citizens to shoot each other so frequently, the end result is fewer gun deaths and injuries. So I am not just about sensible gun laws that to prevent senseless shootings. I am also about a culture that says that too many guns have not made us safer and that a culture that values gun ownership and gun rights over the right of public health and safety is not one to which we should aspire. It's not either/or as the current positions have been articulated. Gun rights and public safety laws can occur simultaneously. America is a country filled with citizens who love their guns. But is also a country filled with victims and survivors of shootings. We are abrogating our responsibility as Americans if we don't do something about this national problem. We can do better. We have a moral imperative to do so.